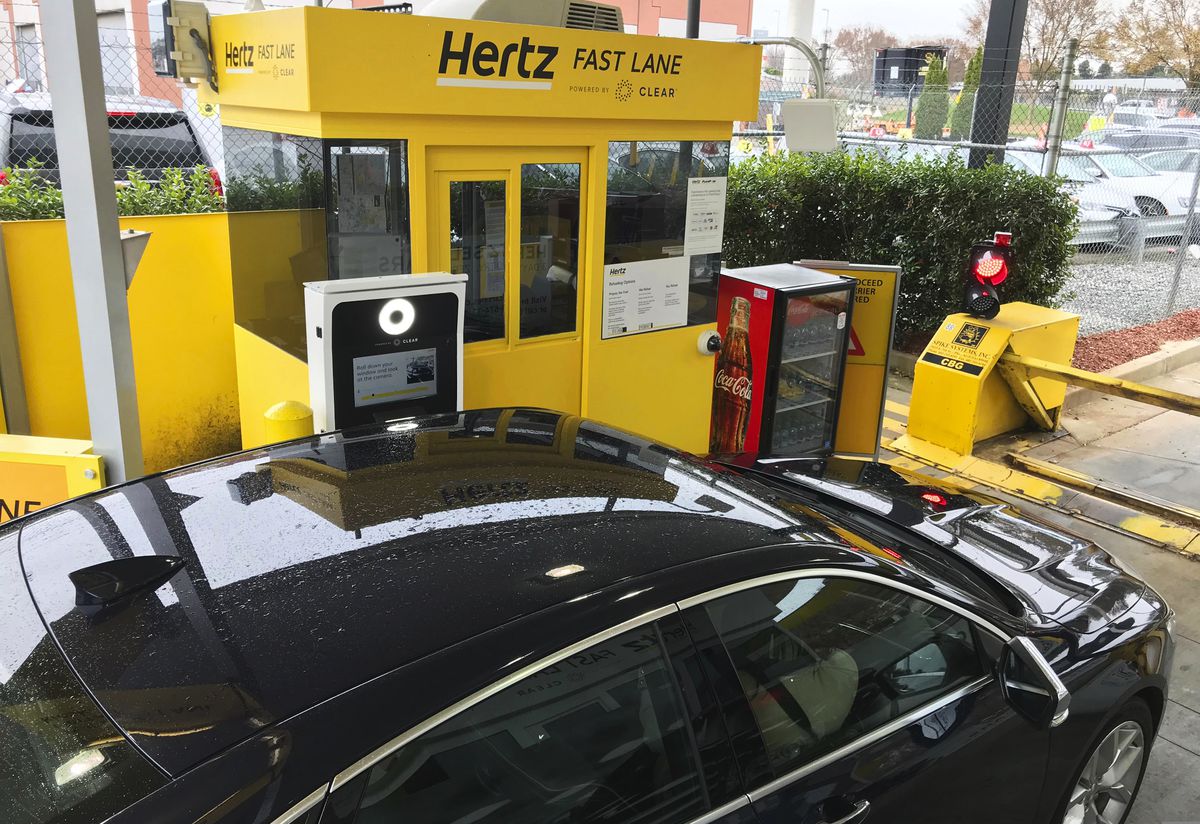 In this Friday, Dec. 7, 2018, photo, a rental car approaches a biometric scanning machine at the exit of the Hertz facility at Hartsfield-Jackson Atlanta International Airport, in Atlanta. (AP Photo/Jeff Martin)

In this Friday, Dec. 7, 2018, photo, a rental car approaches a biometric scanning machine at the exit of the Hertz facility at Hartsfield-Jackson Atlanta International Airport, in Atlanta. (AP Photo/Jeff Martin)

Avis Budget Group’s stock price closed at an all-time high on Friday, a sign that rental car companies’ fleet-shrinking strategies are paying off financially - even as they leave consumers fuming.

Major rental car operators last year sold off more than 770,000 cars as the pandemic crushed demand and kept Americans home, according to Jefferies Group, an investment bank. More than 1 of every 3 rental cars that were in service before the pandemic are no longer available.

For customers, smaller fleets mean higher prices and longer waits. But for the rental companies, shedding car leases and cutting billions of dollars in planned purchases was the key to survival. Now that the economy is growing faster than anticipated and people want to travel, the companies are struggling to find enough cars.

“Usually car rental is an afterthought,” said Benjamin Tuttle, a computer-assisted design programmer from Minnesota, who was taken aback when Hertz quoted him a price of $240 per day to rent a sedan to tour Colorado’s Rocky Mountain National Park.

The industry backfire illustrates that the post-pandemic recovery, while strong, may not be entirely smooth. As more retail businesses reopen, many report trouble hiring enough workers to cope with surging demand. Manufacturers complain that raw materials are scarce - a semiconductor shortage that hobbled auto production is making it hard for companies like Avis to restock.

“The covid shock was unlike anything we have experienced before. As we go into the recovery phase, we’re going to see friction and disruption in the normal flow of economic activity,” said Kathy Bostjancic, chief U.S. financial economist for Oxford Economics. “It’s going to be a bit erratic and disrupted, but the pace of growth will be very strong.”

If the rental car industry - pulverized by last year’s recession - becomes a drag on this year’s recovery, it will be the result of both political and economic forces. The companies’ limited lobbying punch meant they were largely ignored during federal bailout talks. And the financial imperatives of the business required a short-term approach to fleet management that left them unprepared for the economy’s zero-to-60 restart.

Many Americans are flush with cash and want to spend it on the road. Popular travel destinations, including Disneyland, are ready to welcome them. New York Mayor Bill de Blasio said Thursday he wants to “fully re-open” the city by July 1, which probably would draw even more tourists. But rental agencies are not expected to adequately restock their fleets until 2022, meaning there could be millions of frustrated would-be customers during the busy summer travel season and beyond.

Indeed, many forecasters expect the United States this year to post its strongest growth since 1984. The $1.9 trillion American Rescue Plan, coupled with a $900 billion stimulus package approved in December, has awakened demand while coronavirus vaccinations are allowing Americans to resume normal activities.

Almost 1.4 million passengers cleared airport security checkpoints on Monday, more than 10 times the number of travelers on the same date one year ago.

Yet the jump in demand is outpacing rental car supplies.

Kelly Gaule, a Massachusetts-based consultant for nonprofit organizations, prepaid for a Hertz car earlier this month when she needed to make a last-minute trip for a funeral. Upon arriving at the New Orleans airport, she stood in line for an hour just to reach the counter before waiting an additional 90 minutes for her car.

There was no place for customers to sit, leaving people lined up indoors with little ability to distance themselves.

“No one seemed to know what was going on,” she said.

When Gaule finally climbed into the car, the crumbs in the cupholders made it clear the vehicle had not been cleaned thoroughly.

With more customers than cars, the industry’s big three - Avis, Hertz and Enterprise - also can name their price. Midsummer bookings in cities such as Denver and San Diego now cost more than twice the usual rate, Barclays told clients in an April 21 report.

None of the companies responded to requests for comment.

As the economy heals, it also confronts the legacy of policy decisions made during the early days of the crisis.

The pandemic clobbered every part of the travel and entertainment industry. Hotels emptied. Passenger jets were grounded. And few people needed rental cars.

Within days of the first stay-at-home orders, the American Car Rental Association petitioned the federal government for grants, loans and tax relief.

But the rental companies were eclipsed in the bailout battle by the nation’s airlines, which employ almost three times as many workers and carry greater political clout.

Avis, for example, spent $740,000 on lobbying last year, little more than one-fifth of the $3.4 million that flowed from United Airlines Holdings, according to the Center for Responsive Politics’ online database.

When lawmakers assembled the $2 trillion Coronavirus Aid, Relief and Economic Security (Cares) Act, the airlines got $25 billion in payroll support, $25 billion in subsidized loans plus tax relief while the rental car companies walked away empty-handed.

Even if the industry had somehow obtained a federal lifeline, financial logic still would have encouraged large fleet sales, analysts said. By late spring, demand had collapsed. Rental companies had a choice between letting cars sit on the lot, becoming less valuable by the day, or unloading them for whatever they could get.

By May, Hertz had filed for bankruptcy. To conserve cash, the company, which had opened for business in 1918 with one dozen Ford Model T’s, canceled $4 billion in new orders and dumped 198,000 cars into the used car market, according to securities filings.

Avis cut its average fleet size to 440,000 by the end of last year, almost 28 percent smaller than in the first quarter. And the company slashed its purchases of new vehicles by more than half.

“Without a clear understanding of where demand was going to be, there was just a massive dump of fleet into the aftermarket,” said Neil Abrams, who owns a namesake consulting firm. “It’s one reason the industry has even survived to the extent that it has.”

Normally, flooding the used car market with so many vehicles would depress prices. But the pandemic made many Americans wary of mass transit, prompting strong interest in car-buying.

Following auto plant shutdowns triggered by the pandemic’s intertwined health and supply-chain troubles, dealers’ new car inventories were thin. In that environment, consumers were drawn to the late-model used cars that companies like Hertz and Avis were selling.

Between June and October, used car prices rose more than 15 percent, according to the U.S. Bureau of Labor Statistics. Hertz used the proceeds from its fleet liquidation to pay off investors who had purchased company bonds that were backed by its rental cars.

The benefits were more direct for Avis, which booked $157 million in gains on vehicle sales, more than three times what it reported in 2018, according to securities filings.

“The used-car sales are their Cares Act,” said Brian Johnson, an auto industry analyst with Barclays Capital. “You sell the cars to keep the lights on.”

The flip side of shrinking the fleet in bad times is the ability to add cars when demand returns. But today, rental companies’ efforts to stock up are crashing into an auto industry production crisis.

A global shortage of computer chips is crimping production of new cars by General Motors, Honda, Ford, Toyota and others. With a limited supply of chips, the automakers are concentrating on supplying their dealers rather than feeding the less profitable fleet sales channels. That means producing full-feature pickups and sport-utility vehicles coveted by car buyers, not the sedans renters gravitate toward.

On April 1, GM said its first-quarter sales to rental car operators were down 55 percent this year compared with the same period in 2020. The automaker said it would “work closely with fleet customers, including daily rental customers, to meet demand as production normalizes.”

The rental car companies have a history of rushing to increase their fleets when the economy is strong, thus damaging their pricing and profit potential, said Hamzah Mazari, a managing director with Jefferies.

“Even if they wanted to add back quickly, there’s a shortage because of chips,” he said. “They’re also being cautious about adding back. They don’t know what demand is going to look like.”

The rental car industry’s financial situation is improving. Shares of Avis reached a new all-time high on five consecutive days this month. Even Hertz, which almost drowned in debt last year, now has multiple bidders vying to buy it out of bankruptcy. Its bonds, which traded last year for 10 cents on the dollar, have surged in value.

Barclays’ Johnson says the industry is poised for “peak profit generation” this summer. For investors, the question is whether the companies have learned from their past mistakes and will avoid eventually expanding their fleets too much.

Even as demand recovers, Avis, Hertz and Enterprise are not expected to grow their offerings substantially until 2022. Avis this year is expected to add just 5,000 cars to its global 532,661-vehicle fleet, according to Barclays’ estimates.

That means more customers with experiences like that of Sam Ferguson.

A vice president for student affairs and intercollegiate athletics at McMurry University in Texas, Ferguson flew to Atlanta this month with his wife to attend a marital retreat. They had planned to pick up their rental car early on Friday afternoon, leaving them plenty of time before the retreat’s 6 p.m. start to make the two-hour drive.

“We were met with a four-hour wait,” he said.

Ferguson and his wife improvised. A friend linked them to another couple heading to the same retreat. They called an Uber. And when the driver materialized, the four travelers crammed into his Nissan Sentra for the 90-mile drive.

“In hindsight, the downsizing of the fleet was probably more significant than it should have been,” said Jonathan Smoke, chief economist of Cox Automotive. “I’m sure most rental car executives wish they had more inventory right now.”