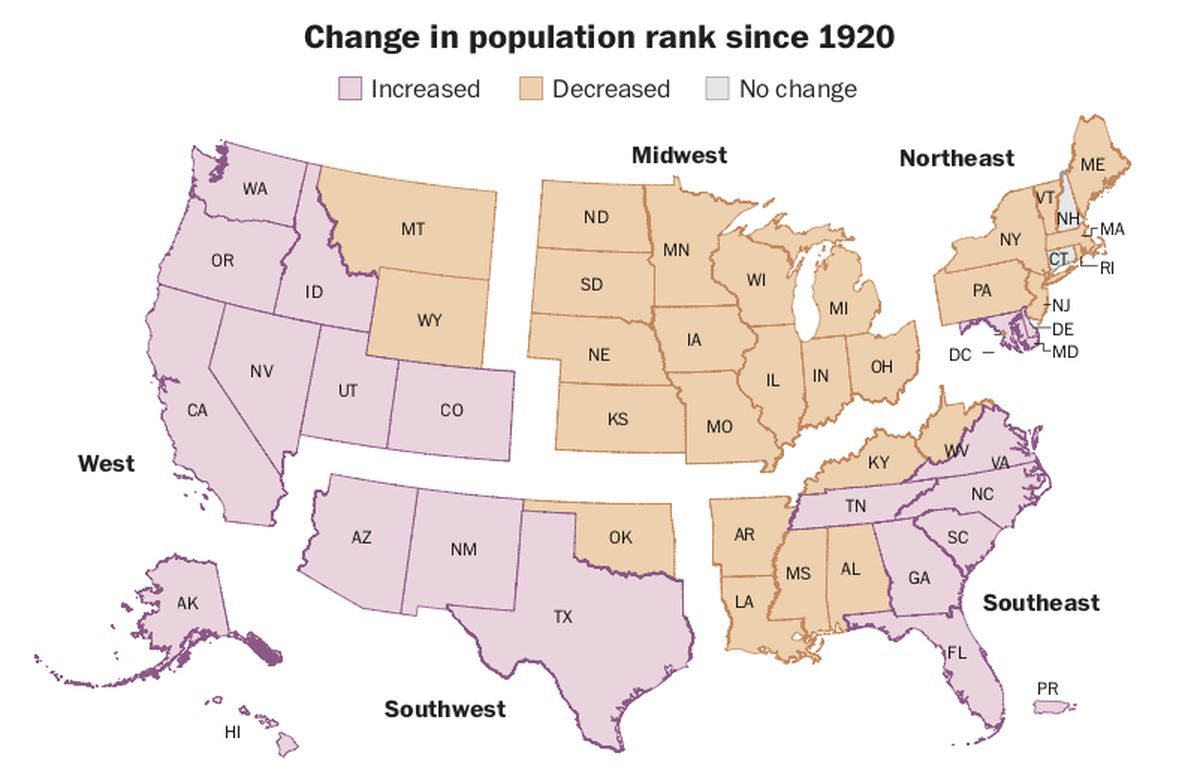 The story of the U.S. population is one of fluidity. Of the 50 states plus the District of Columbia, and Puerto Rico, more than half jumped ahead or fell behind others this year, despite state population totals that showed the nation’s slowest population growth since the 1930s. Compared with a century ago, the shifts are even more significant, with states rising by as many as 33 positions or falling by as many as 16.

No single explanation can capture the complexity of these population shifts. Within any given region, some states have flourished while others declined. As some economies faltered, new industries sprung up and attracted migration from inside and outside the country.

In broad terms, states in the South and the West have experienced the biggest gains in the past century, with many rising in the past decade. Meanwhile, those in the Northeast and the Midwest have steadily declined.

The nation’s last stagecoach robbery took place in 1916 (or stage wagon, if you prefer), signaling that the country’s frontier days were firmly behind it. The population increases in western states such as Colorado and Oregon continued into the 21st century.

Nevada, perhaps as much as any other state, encapsulates the American West’s 20th-century growth story. During the first half of the century, the Silver State was the country’s least populous.

“Las Vegas was this little seedy extension of Los Angeles where the mob ran things, and people went to gamble but didn’t want to live,” said James N. Gregory, a history professor at the University of Washington. “But they began to build more and more of a livable infrastructure. So instead of just going to gamble, let’s go there to work.”

Over the past decade, Nevada grew faster than much of the rest of the country, climbing from the 36th to the 33rd most populous state. Utah and Idaho grew even faster, recording the two fastest growth rates among all states over the past decade.

Meanwhile, No. 1 California grew slower than the national average, losing a seat in the House for the first time. The state, which received a flood of domestic migrants in the mid-20th century up until the 1990s, had a net loss of nearly half a million people in the past two years.

Hawaii’s growth perhaps began just three days after it became a state in 1959, when Pan Am offered the first jet service to Honolulu, making the islands accessible to more Americans and encouraging a surge in tourism.

Of all the forces driving the past 100 years of migration in the United States, the widespread introduction of residential air conditioning may be the most humdrum - and among the most potent. Not all southwestern states rose in the rankings during this time, but a desert state like Arizona undoubtedly benefited from its implementation.

Yet air conditioning alone did not drive all of the population increases in the Southwest. The completion of Hoover Dam in 1936 spurred the development of Phoenix and Las Vegas and provided access to clean water, as did federal investments in military bases in Arizona and Texas.

“Texas not only has a lot of immigrants, but it also gets a lot of domestic migration,” Kenneth Johnson, a demographer at the University of New Hampshire, told The Washington Post. “And so that’s the one-two punch - domestic migration and immigration - that can push a state up.”

Texas’s growth over the past decade was prodigious, enough to earn two additional congressional districts, propelled by the oil industry, a low cost of living and a shared border with Mexico. If current population trends continue, the Lone Star State could overtake California as the nation’s most populous state.

The Southeast’s growth has been mixed, with states along the Atlantic Coast generally growing faster than their Gulf Coast and Appalachian neighbors.

Over the past century, Florida has gone from the least to most populous state in the region, rising from 33rd largest a century ago to the third largest today.

Starting in the 1920s the state benefited from what Gregory calls “the pursuit of the lifestyle,” as northerners and immigrants sought more temperate weather and economic opportunities.

At the same time, racial segregation and discrimination spurred more than 6 million Black Americans to leave the Southeast. Alabama and Mississippi are among the states that have repeatedly fallen back in the rankings.

If Puerto Rico were a state, its population of 3.7 million would be good for 30th largest in the country, even after suffering a nearly 12% population decline since 2010 fueled by an economic recession, natural disasters and a declining fertility rate.

In 1920, about 3 in 10 Americans lived in northeastern states, including New England, the Mid-Atlantic area and the District. In 2020, only about 2 in 10 Americans called that region home. Over the past century, the northeast’s population has grown slower than the rest of the country as people have flocked to southern and western states.

New York, the most populous state until the 1970 Census, has struggled with domestic migration losses. Slow growth cost the state a congressional seat this year.

“Just as you see New York slipping a little bit in the rankings, you see Florida climbing up,” Johnson said. “Now, that doesn’t mean it didn’t grow, but it didn’t grow as much.”

In a testament to the fluidity of the rankings, Connecticut and New Hampshire are the only two states that landed in the same spot in 2020 as they did in 1920.

The District began to fall in the rankings starting in the 1950s amid the “White flight” across the country as hundreds of thousands of White residents left cities. Fiery riots following the assassination of the Rev. Martin Luther King Jr. in 1968 spurred a further exodus, and not just among White people.

“If you moved, you swam; if you stayed put, you sank,” The Post’s Eugene Robinson wrote of the Black exodus from D.C. Lately, the city’s population has begun to rebound. This year, the District jumped in the rankings for the first time since 1950.

The past century’s reorienting of the U.S. economy, from the production of goods to the provision of services, has been unkind to agricultural and industrial pursuits. Many parts of the Midwest have struggled as a result.

Every state in this region has a lower rank now than it did 100 years ago. No state has fallen further than Iowa, the 16th most populous state in 1920 and the 32nd now. The state’s dependence on agriculture has provided little growth relative to the rest of the country.

“Farming is kind of a zero-sum game for a family. They keep the land together or give it to one of the sons, typically, and the others do something else,” Gregory said. “Going and doing something else has led to big migration routes out of Iowa since the 1800s.”

Many factory jobs have dried up, and the Midwest is dotted with iconic American cities such as Cincinnati, Detroit and St. Louis that no longer attract the waves of job-seeking migrants that they once did.

State rankings cannot fully capture the complexity of the changes taking place, as most states are diverse and have rural and suburban areas, along with large cities.

“Illinois receives a substantial amount of immigration . . . yet it’s hurt by domestic migration,” Johnson said. The state was one of only three with a net loss of population since 2010. “What’s happening in the rural parts of the state may play out differently than what’s happening in the more urban parts of a state.”

Although the Midwest has lagged in recent decades, only one thing is certain in the long term: By 2120, the winners and losers in the great population race are unlikely to look anything like they do now.

About this report: The populations used to determine these rankings come from the Census Bureau. Alaska and Hawaii became states in 1959 but populations were included beginning in 1920 so that the total number of ranks remained consistent from decade to decade. The District and Puerto Rico were included because they have populations larger than some states. No regional classification is perfect. The regions in this article were created based on existing government regional classifications and a desire to group together states that share common geographic, historical or cultural characteristics.