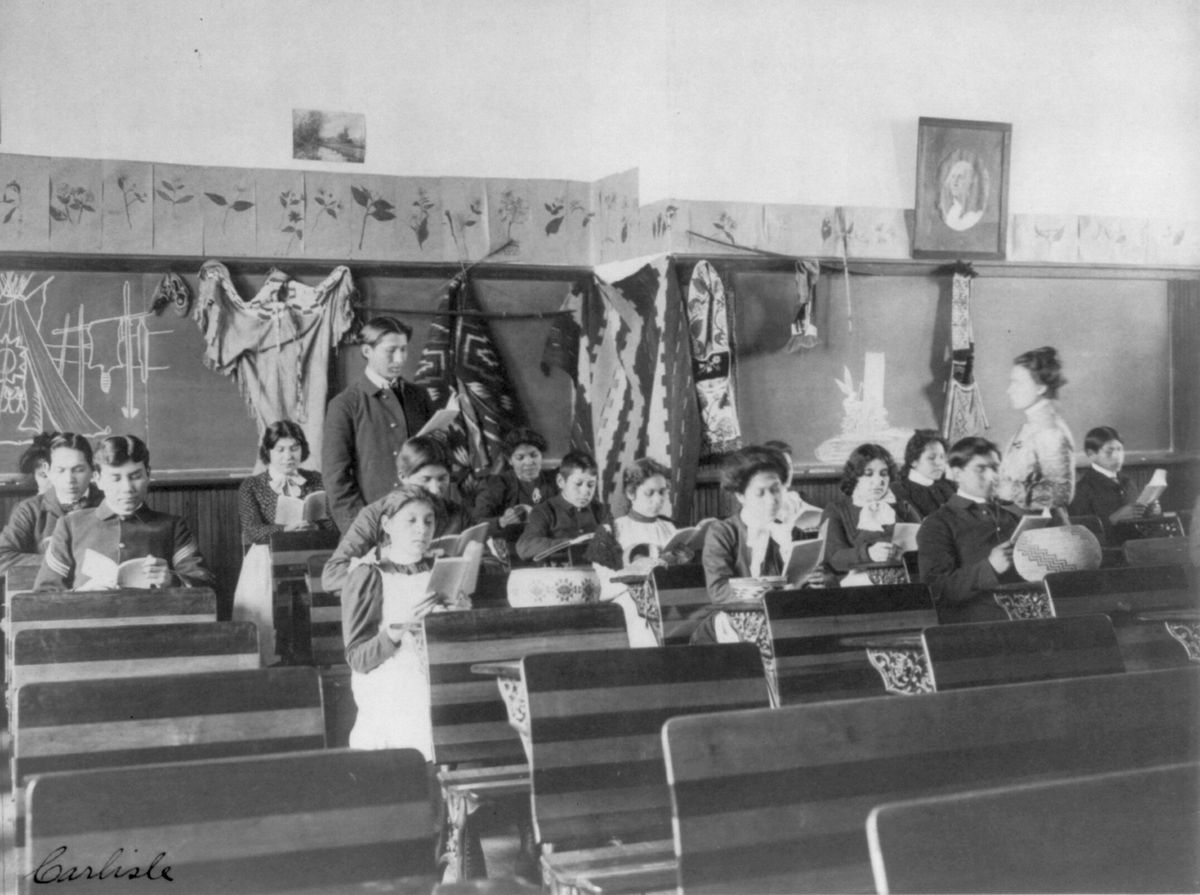 Students read during class at the Carlisle Indian Industrial School in Pennsylvania in 1901. (Photo by Frances Benjamin Johnston courtesy of the Library of Congress)

Students read during class at the Carlisle Indian Industrial School in Pennsylvania in 1901. (Photo by Frances Benjamin Johnston courtesy of the Library of Congress)

CARLISLE, Pa. — In the summer of 1901, a petite 12-year-old girl was plucked from an orphanage in Alaska and shipped across the continent by boat and train. She arrived in Pennsylvania 25 days and 4,000 miles later, a world away from the windswept island in the Bering Sea where she was born, where her Aleut heritage went back generations.

So began the final chapter in the heartbreakingly short life of Sophia Tetoff, one that would end five years later at the Carlisle Indian Industrial School in rural Pennsylvania.

Sophia was among more than 100,000 Indigenous children placed in an estimated 375 boarding schools throughout the United States from the late 1800s through the 1960s. All operated on the belief that such youth could be “civilized” if removed from their tribal environment.

“To take children away from their homes and families and subject them to assimilation is to commit cultural genocide,” said Christine DiinDiisi McCleave, executive director of the National Native American Boarding School Healing Coalition.

Many people are now trying to atone for that painful legacy, including the U.S. Army. Its War College and Carlisle Barracks occupy what had been the school grounds, which became the burial grounds for Sophia and at least 188 other students. The true number may never be known, historians say, given poor record keeping, sloppy burial practices and the relocation in 1927 of a cemetery so that a parking lot could be constructed. Some surviving headstones are only marked “Unknown.”

Last weekend, a private funeral ceremony was held at the site for Sophia; two of her descendants attended from California. The event marked the start of a month-long disinterment process, the fourth time in five years that the remains of Carlisle students are being returned to their birthplaces.

Interior Secretary Deb Haaland, the first Native American to serve as a Cabinet secretary, has pledged sustained action. In announcing the creation of the Federal Indian Boarding School Initiative, she said Tuesday that the department will identify boarding facilities, cemeteries and the children buried there to “uncover the truth about the loss of human life, and the lasting consequences of the schools.”

Haaland’s own great-grandfather was a survivor of the Carlisle school.

The new focus comes in the wake of two shocking discoveries in Canada, where hundreds of unmarked graves believed to hold Indigenous children have recently been found at former residential schools in British Columbia and Saskatchewan. As in the United States, they were often forcibly separated from their families, barred from speaking their languages or maintaining their traditions.

Until now, uncovering this history and tracing these children has mostly relied on the determination of individuals toiling in archives or online. Yet some names have been remembered and passed on in moments of serendipity, which is how Sophia Tetoff’s great-great-niece learned of her ancestor several years ago.

Lauren Peters, a former commercial pilot in Winters, Calif., had been involved in organizing a local cultural celebration of the Aleuts. She got a call from a tribal elder looking for information on lost girls from the islands off Alaska’s southern coast who had been students in Carlisle. He mentioned Sophia by name.

“Tetoff, that’s my family name,” Peters responded. The conversation triggered a quest that has changed her life.

Peters returned to school at the University of California at Davis and began pursuing a Ph.D. in Native American Studies. As part of her studies, she is documenting the Alaska Native children buried in boarding school cemeteries across the United States.

Sophia’s story, she says, is emblematic of generations of violence and exploitation targeting Indigenous people on the Aleutian and Pribilof Islands. Many were enslaved by the Russian-American Company, a fur-trading monopoly that established colonies in Alaska during the early 19th century.

After the United States purchased Alaska from Russia in 1867, the Bureau of Indian Affairs directed its assimilation campaign at the Aleuts - who also call themselves Unangax. At the same time, Protestant missionaries began to set up and try to fill orphanages. A similar effort was being pursued across the country’s western territories, with missionaries as well as emissaries from the U.S. War Department pressuring or even coercing tribal leaders to give up children as part of treaty negotiations.

In 1879, about 25 miles southwest of Harrisburg, Pa., the Carlisle Indian Industrial School opened under the direction of Lt. Richard Henry Pratt. It was the agency’s flagship boarding school, a model for later institutions, and it ultimately would house nearly 11,000 students representing 50 tribes. Some were as young as 4 when they arrived. Fewer than 800 would ever graduate.

Pratt’s stated goal was “kill the Indian, save the man.” Upon arrival, children were stripped of their native dress and long hair. “Before and after” images carefully document the transformation.

“Pratt’s vision was to rescue the children. But depriving the children of identity and language was unconscionable,” said Barbara Landis, a Carlisle-based historian who has done extensive research on the school.

Little is known about Sophia’s five years there except that she spent more than half her time on “outings,” when students were sent to live with White families. The ostensible goal was for them to learn how to adapt in White America, but the girls and boys served as cheap labor during those placements, working in factories, on farms or as domestic servants in households.

Sophia was on her fifth outing when she contracted tuberculosis in 1905 and was sent back to Carlisle. She died a year later, thousands of miles from home.

Sophia’s gravesite lies beneath a weeping cherry tree in the surviving Indian School Cemetery, surrounded by the Carlisle Barracks. The small burial ground, marked with Army-issued marble headstones, is squeezed between a busy on-base thoroughfare and the PX parking lot. The names of several of the Sioux students who also will be repatriated this summer are etched in nearby headstones: Lucy Take the Tail (Pretty Eagle), Rose Long Face (Little Hawk), Ernest Knocks Off (White Thunder).

In a final indignity, Sophia’s marker contains several errors. Her surname is misspelled and her tribe listed as “Chuskon,” which Peters thinks is either a made-up or mangled tribal name unrelated to her heritage. Per military custom, the headstone will be destroyed and the plot returned to green space.

Peters and her son, Andrew, flew to Pennsylvania for last weekend’s service, which was presided over by a Russian Orthodox priest. Andrew served as a pallbearer, wrapping Sophia’s remains in a fur seal pelt to “put her to bed in her box,” she explained.

The stress Peters had felt in the buildup to the ceremony melted away when she finally was there. “There is one less child in this cemetery, and that’s a good day,” she said Friday, reflecting on the experience. “Sophia will lead the other Alaskans out of that cemetery.”

Her ancestor’s remains will travel under a Native American escort to St. Paul Island in Alaska and will be buried with family members at a pastoral cemetery by the sea.

What happened to her was “a deep, dark, horrible thing,” said Peters, who plans to witness that final moment next month. “But we are excited that we are taking back what was stolen from us. With that comes a lot of empowerment.”