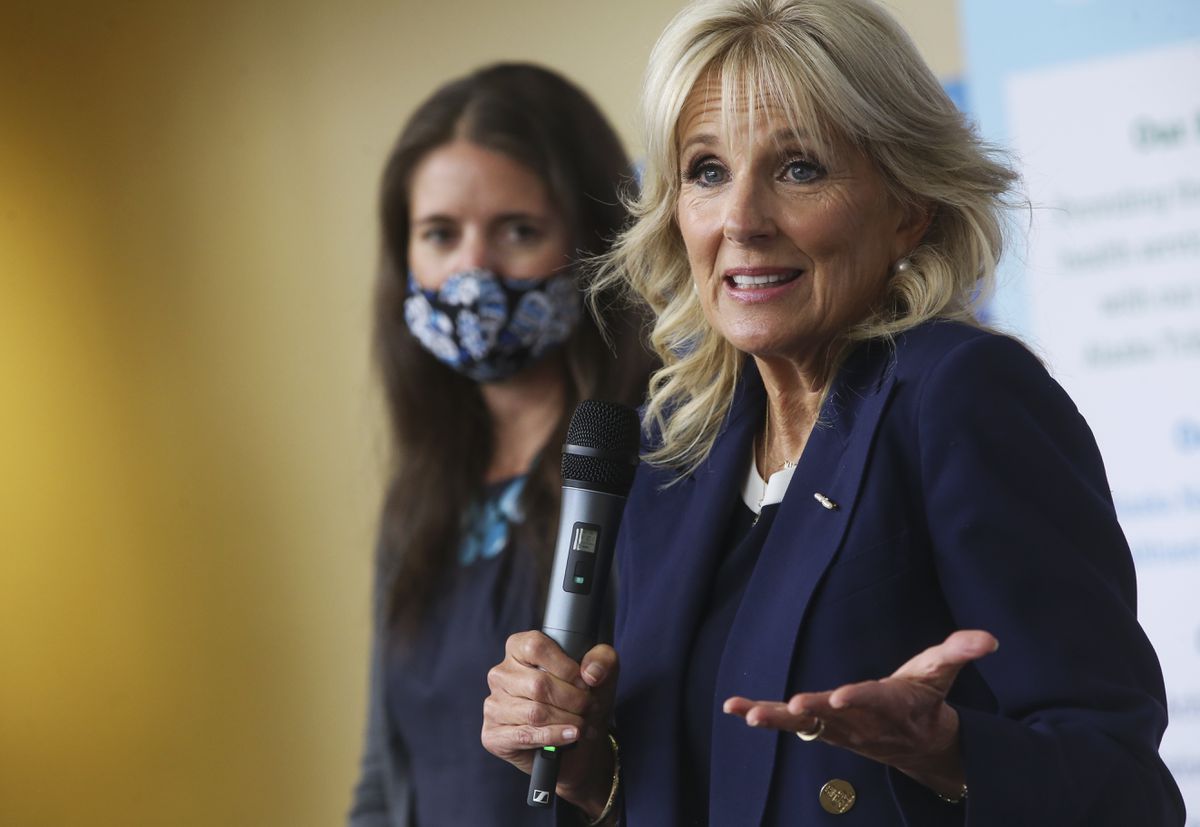 First Lady Jill Biden speaks to members of the press at the Alaska Native Tribal Health Consortium in Anchorage while urging Alaskans to get their COVID-19 vaccination on Wednesday, July 21, 2021. Anne Zink, Alaska's chief medical officer, is behind. (Emily Mesner / ADN)

First Lady Jill Biden speaks to members of the press at the Alaska Native Tribal Health Consortium in Anchorage while urging Alaskans to get their COVID-19 vaccination on Wednesday, July 21, 2021. Anne Zink, Alaska's chief medical officer, is behind. (Emily Mesner / ADN)

First lady Jill Biden praised Alaska’s effort to vaccinate residents against COVID-19 — and noted there’s still more work to be done — during a quick stop in Anchorage on Wednesday as she leads a U.S. delegation to the Olympic Games in Tokyo.

Alaska, like other parts of the country, is seeing case counts rise, and health officials have expressed concern about flattening vaccination rates.

“Even as we celebrate the progress we’ve made, we know that this last push is really the hardest of all,” Jill Biden said while visiting the Alaska Native Tribal Health Consortium in Anchorage. Getting more people vaccinated will mean making the case “person by person,” she said.

Standing in front of an American flag, an Alaska flag and a long row of bright blue posters that read, “WE CAN DO THIS!,” the first lady thanked the state’s chief medical officer, Dr. Anne Zink, and the health consortium’s leader, Valerie Nurr’araaluk Davidson, for their efforts getting Alaskans vaccinated. The tribal health system has been credited with helping Alaska get off to a strong start with its vaccine rollout, with tribal health organizations sharing vaccines with the broader community and being able to decide how best to distribute their allocations.

Davidson said that with cooperation among the tribal health system and state and federal governments, “we were able to ensure that some of our last language bearers and our last culture bearers were able to be among the first people vaccinated, regardless of their age.”

In a state where many communities are off the road system, vaccine was delivered in some cases by means including small planes, boats and sleds. The vaccine was even transported out to a whaling boat in 8-foot seas, Biden was told.

She clapped with enthusiasm when she heard that some Alaska villages have reached 100% vaccination rates among those eligible to receive the COVID-19 vaccine. Statewide, about 52% of Alaska residents 12 or older are fully vaccinated, according to the state health department.

Zink, who has been one of the public faces of Alaska’s COVID-19 response, lauded Biden’s visit. “We get excited when Alaska’s actually on a map. We’re even more excited when people come and visit our big and beautiful and absolutely wonderous state,” she said.

Davidson, who is Yup’ik, gave Biden the name Taurluq, which Davidson said was the name of her grandmother. “I hope I can try and live up to the woman your grandmother was,” Biden said.

“They don’t have to take the long, expensive trip to Anchorage, and they have the support of their community health aide,” Bruley said.

“When we provide care as close to home as possible, in the language of the people we serve, we see better health outcomes,” Davidson told Biden during the briefing.

Biden said this trip marked one of many visits to Alaska, and that she has many friends here.

“I’ve seen the heart of this state in so many ways, and it’s just really special for me to be here today as your first lady,” she said.

The trip opened Wednesday at Joint Base Elmendorf-Richardson, where the first lady arrived around 1 p.m. local time. Waiting on the tarmac to greet her were officials from the base and staff and guests at the Alaska Fisher House, where military and veteran families can stay free of charge when a loved one is hospitalized.

“It was an opportunity of a lifetime,” she said.

Pandemic looms over the Olympics

This marks Biden’s first solo international trip as first lady, with the pandemic in the forefront as the coronavirus surges in Tokyo and cases have climbed to a six-month high.

White House press secretary Jen Psaki said Tuesday that President Joe Biden and the first lady both felt it was important that the delegation to the Olympic Games be led “at the highest level,” and that Jill Biden looked forward to the long journey to help support U.S. athletes, who will be competing in some of the starkest conditions for an Olympic Games.

She has a robust agenda for roughly 48 hours on the ground in Japan’s capital.

The first lady is set to arrive at Yokota Air Force Base in Tokyo on Thursday afternoon and have dinner with Prime Minister Yoshihide Suga and his wife, Mariko Suga, at Akasaka Palace.

She is to return to the palace Friday and be hosted by Mariko Suga. Biden will hold a virtual get-together with members of Team USA before meeting Emperor Naruhito at the Imperial Palace. She attends the opening ceremony for the games in the evening.

On Saturday, the first lady will dedicate a room in the residence of the U.S. chief of mission to former U.S. Sen. Daniel Inouye, D-Hawaii, and his wife, Irene Hirano Inouye. The senator died in 2012, and his wife died last year.

Jill Biden will also host a U.S. vs. Mexico softball watch party at the U.S. Embassy for staff and their families, and cheer U.S. athletes competing in several events before leaving Tokyo.

On Biden’s way back from Tokyo, she is set to tour a Honolulu vaccination clinic before returning to Washington.

The Olympic host city is now under its fourth state of emergency, which runs through Aug. 22, spanning the duration of the Olympic Games that open Friday and end Aug. 8. Fans are banned from all venues in the Tokyo area, with limited audiences at a few outlying sites.

Suga’s government has been criticized for what some say is prioritizing Olympic sport over public health, and there has been little fanfare in the run-up to the Games, which were postponed from last year because of the coronavirus pandemic.

The Imperial Palace said last month that Naruhito is “extremely worried” that the games could accelerate the spread of the coronavirus.

Jill Biden is fully vaccinated. Psaki, the White House press secretary, said the U.S. delegation will follow “very strict” health and safety protocols during the trip, including limiting their engagement with the public and keeping as small a footprint as possible.

President Joe Biden is not attending the Games.