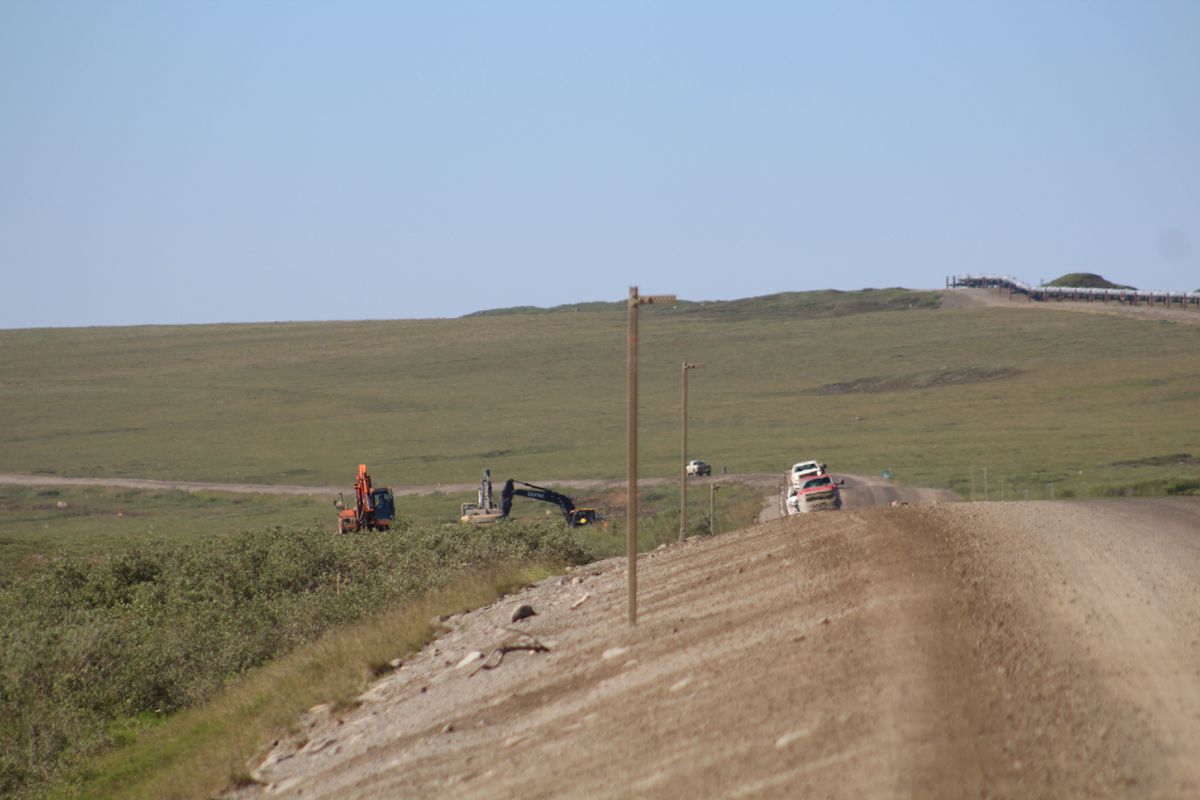 At the close of the Civil War, the Western Union Telegraph Company cut 15,000 telegraph poles in Russia and North America and explored 6,000 miles as part of the first great telecommunications project in Alaska.

But the well-financed project to link New York to European capitals via the Bering Strait, which started two years before the Alaska purchase from Russia, was the gas pipeline of its day.

Construction never happened because in 1866 Cyrus Field finally succeeded in doing the impossible: installing a trans-Atlantic telegraph cable that worked, sending eight words a minute across the sea.

A century and a half later, the Bering Strait may yet become the crossing point for an international subsea cable connection if an ambitious three-phase telecommunications project becomes a reality.

The first phase is taking shape now, as upwards of 450 people are expected to be deployed between Nome and Prudhoe Bay within weeks, installing 1,176 miles of cable and on-shore connections, bringing high-speed data facilities to Nome, Kotzebue, Point Hope, Wainwright, Barrow and Prudhoe Bay.

It will be "one very short, complex Arctic summer" for the Quintillion project, with operations taking place simultaneously across hundreds of miles on land and sea, said Elizabeth Pierce, the CEO of Quintillion Subsea Operations based in Anchorage.

"Everything's built, most of it's arrived in Alaska, we have more vessels arriving now," she told those who gathered this week in the Barrow High School gym for a two-day meeting on broadband and related development issues for northern Alaska.

The investors in the project, which include a private equity fund as well as the Arctic Slope Regional Corp., say that the Alaska phase will stand on its own but  they hope that connections to Europe and Japan will follow in the years ahead.

By itself, the Alaska project is a major venture. An unofficial estimate putting the cost at $250 million has been reported,  but the sponsors, who have not released exact numbers, say that estimate is "out of date."

The company began burying a new fiber optic cable from Prudhoe Bay to Fairbanks a year and a half ago, following the Dalton Highway and the Elliott Highway. In Fairbanks, it will connect to existing fiber optic cable systems to the Lower 48, she said.

The work along the Dalton Highway is the most visible sign of construction and new activity for hundreds of miles.

On the water, a small fleet of ships will work in parallel to install the subsea system, with completion and testing by the end of this year and operations beginning in the first quarter of 2017.

Alcatel Submarine Networks is one of the most experienced companies in the industry and was chosen for the work because it has the best repeaters in the business, she said.

"When you're putting something under ice for six, eight months a year, you want to know that the equipment isn't going to fail," Pierce said.

"We designed this system to be able to be upgraded from the shore."

It is a 30-terabit-per-second system, which is 30 million megabits per second, a "massive amount of capacity compared to what we've experienced in the Arctic thus far," she said.

"We can double that capacity just by changing out cards with existing technology."

One of the ships has left Dutch Harbor, two ships are in Nome and the two main cable-laying ships are on the way from Calais, France, where the cable was built.

Alcatel-Lucent Networks is installing the subsea cable, which can be buried to a depth of about 36 feet where necessary to avoid ice scouring.

The system is being designed to last 25 years or longer with the goal of providing "true broadband at substantially lower cost than existing satellite and microwave backhaul," the company says.

The Quintillion project and its implications for Alaska's future drew close attention at the Barrow conference — both from consumers who look forward to faster and cheaper Internet connection speeds and those who see this as a key to the region's economic future.

Matt Boyer is a senior adviser at Cooper Investment Partners, a New York fund that is the major investor in the project.

"The original idea was to build a subsea cable from Europe to Asia and stop off in Alaska along the way, almost as an afterthought," he told the Barrow gathering, which was broadcast on KBRW in Barrow.

But it's hardly an afterthought now. He said the company has a "long-dated investment horizon" and can afford to take a different view on things than other companies might.

There was a subsea cable building boom in the late 1990s in which fortunes were made and lost, after which the industry went dormant, he said.

"Along the way, the entire telecom industry has been turned on its head," he said.

The companies now building long-haul fiber optic systems are not strictly telecom companies but firms like Facebook, Google and Microsoft.

Boyer said data centers at geographically diverse locations around the world and the opening of the Arctic Ocean because of climate change have helped created conditions to make this project feasible. One of the presenters at the Barrow meeting said there was local interest in creating a Barrow data center and he promised to investigate the possibility.

The Alaska portion, Boyer said, will benefit from a "tremendous amount of federal support" in the form of internet traffic related to health care, education, homeland security and the military, and there will be a solid commercial demand.  Communication by cable is less expensive than by microwave or satellite.

"From a long-term development standpoint, the Arctic represents a huge opportunity. Broadband in my mind, that's the vanguard. Without that, you don't have much opportunity for development; with that, the sky's the limit," he said.

One of the Barrow residents asked about the possibility of lower prices, saying that some families complain about their children having run up internet bills of $1,000 by excessive data usage.

She said she had tried to watch a movie on Netflix in Barrow, but it stopped so often that by the time the movie was over, "we had forgotten what the beginning was all about."

The new system will lead to "much lower prices," Pierce said.

Although the major investor in the project is Cooper Investment, a private equity fund based in New York, the ownership chain is complicated.

"The equity interest in the Cooper Fund is ultimately held, through a series of intermediate trust funds and Delaware holding companies, by The Phoenix Charitable Trust, a trust formed under the laws of Bermuda whose trustees are Mr. Alex Blavatnik, a U.S. citizen, and Mr. Lincoln Benet, a citizen of the United States and the United Kingdom,"  an April 22 document filed by the Federal Communications Commission says.

Blavatnik is the brother of Len Blavatnik, who has a net worth of $15.3 billion, according to Forbes.

Born in the Ukraine and raised in Moscow, Len Blavatnik moved to the United States in 1978 at 21 and became a U.S. citizen.

He heads the conglomerate Access Industries, where Alex is a senior executive. The holding company owns Warner Music.

In a 2014 profile in the New Yorker, Connie Bruck wrote that Len Blavatnik "made his fortune in the tumultuous privatization of aluminum and oil that followed the collapse of the Soviet Union."

Len Blavatnik was one of the wealthiest donors to President Obama and also contributed to Mitt Romney. He has given tens of millions to Harvard, Yale and Oxford.

Columnist Dermot Cole lives in Fairbanks. The views expressed here are the writer's own and are not necessarily endorsed by Alaska Dispatch News, which welcomes a broad range of viewpoints. To submit a piece for consideration, email commentary@alaskadispatch.com.