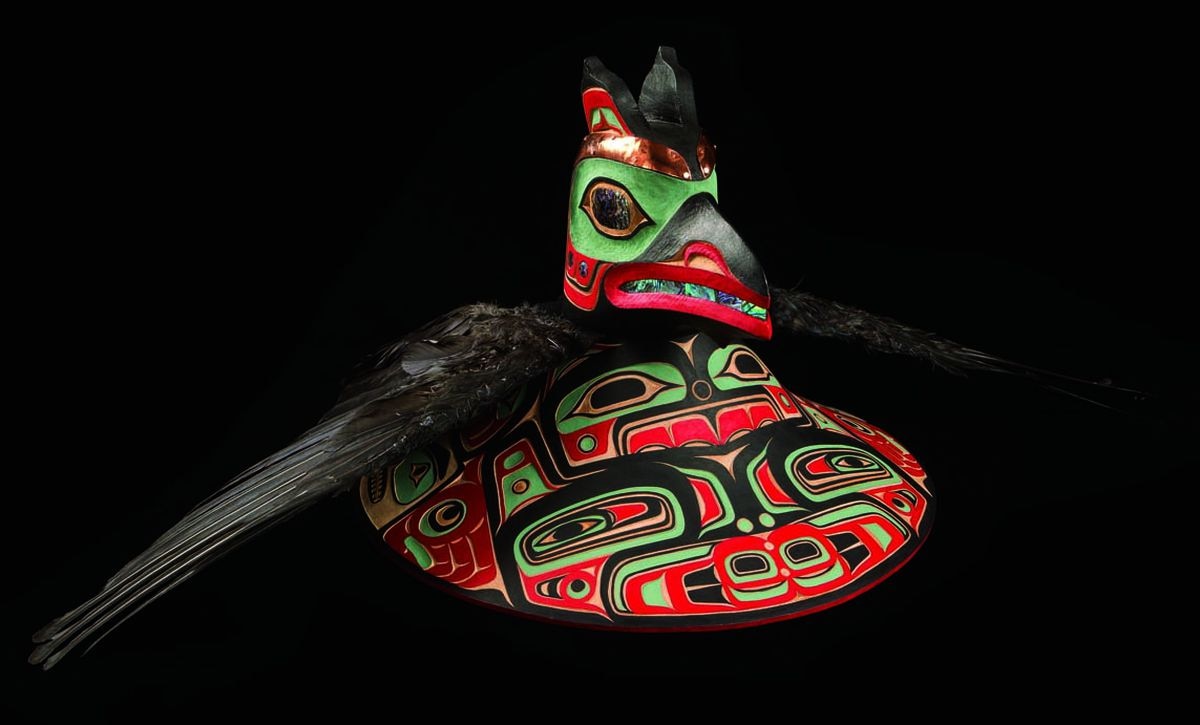 A raven hat made by Tlingit carver Archie Cavanaugh. Cavanaugh found himself in hot water in 2012 when the U.S. Fish and Wildlife Service said he had violated the Migratory Bird Treaty Act by using flicker and raven feathers in his artwork. (Photo courtesy Sealaska Heritage Institute)

A raven hat made by Tlingit carver Archie Cavanaugh. Cavanaugh found himself in hot water in 2012 when the U.S. Fish and Wildlife Service said he had violated the Migratory Bird Treaty Act by using flicker and raven feathers in his artwork. (Photo courtesy Sealaska Heritage Institute)

A century after the passage of the Migratory Bird Treaty Act, the federal government is working to eliminate restrictions within the law that impinge on Alaska Native artisans' ability to sell traditional pieces adorned with feathers, beaks and other inedible bird parts.

The act is one of the oldest wildlife management laws in the nation, but unlike the Marine Mammal Protection Act, the Bald and Golden Eagle Protection Act and the Endangered Species Act, it has no exceptions for traditional American Indian or Alaska Native use.

Rules proposed by the U.S. Fish and Wildlife Service in June would remedy what many Alaska Natives consider archaic and discriminatory restrictions in the treaty.

The restrictions became a touchstone issue in 2012 when a Tlingit carver from Juneau found himself on the wrong side of the law. Archie Cavanaugh faced large fines and jail time for attempting to sell online a headdress and hat he'd made, both of which contained feathers from migratory birds.

Cavanaugh used flicker feather on the headdress, and raven feathers on the hat. He ultimately ended up paying a $2,000 fine, but he hadn't known he'd broken the law. Such adornments have a long-established history among Alaska Natives — a history that predates the formation of the 1916 Convention for the Protection of Migratory Birds in Canada and the United States.

"So many of our people use these materials and they're not aware that selling them is prohibited. The use of flicker feathers is an ancient practice," Rosita Worl, president of Sealaska Heritage Institute, said in 2012. At the time, SHI had partnered with the Alaska Federation of Natives to advance an amendment to the treaty, calling on Alaska's congressional delegation to help.

U.S. Sen. Lisa Murkowski and U.S. Rep. Don Young each presented legislation to create exceptions for Alaska Native artists within the act. Without the exceptions, Young explained, what exists is "… a bizarre policy that allows Alaska Natives to hunt, kill, consume and also use non-edible parts in handicraft items but prohibits them from selling these handicrafts."

In July 2014, Sealaska Corp. Vice Chair Jacqueline Pata explained to Congress that "Alaska Natives have used migratory birds and bird parts, including feathers, for thousands of years in the making of traditional handicrafts such as masks, garments, jewelry, clothing and dance regalia (fans, hats rattles), and hunting equipment such as spears and arrows."

Pata assured the House Subcommittee on Fisheries, Wildlife, Oceans, and Insular Affairs that fears changing the law would lead to wasteful takings or over-commercialization were unfounded, and provided a moral rationale to take action.

"Alaska Natives can revitalize a suppressed cultural practice and art form while simultaneously allowing the sale of these handicrafts as a vital source of a modest income with which we can purchase a few of the basic human needs such as heating fuel or baby formula," Pata said.

Although the measures died during the 113th Congress, the U.S. Fish and Wildlife Service, the Alaska Department of Fish and Game and Alaska Native representatives have since collaborated to find a work-around.

"These regulations would enable Alaska Natives to sell authentic native articles of handicraft or clothing that contain inedible byproducts from migratory birds that were taken for food during the Alaska migratory bird subsistence harvest season," the Fish and Wildlife Service announced in its public notice about the proposed change.

After reviewing treaties with Russia, Canada, Mexico and Japan, the three groups came up with a list of 27 species of migratory birds that could be used in artwork and for sale. Among them are the king eider, common eider, Pacific loon, double-crested cormorant, black oyster catcher, red-legged kittiwake, Arctic tern and the great horned owl.

The proposed rule change requires an artist to provide proof of affiliation with a tribe, the Bureau of Indian Affairs or have a Silver Hand insignia. Alaska's Silver Hand program identifies pieces as authentic Alaska Native art made by the artist and within Alaska.

The safeguards are intended to deter counterfeiters as well as thwart mass production. Sale and transport of pieces would be limited to within the United States until an import and export system is established, according to Fish and Wildlife.

When she spoke to Congress, Pata pointed out that the Migratory Bird Treaty Act included provisions to allow the making and sale of pillows, blankets and fishing flies from ducks, geese, brant and swans. But in prohibiting other uses of migratory bird feathers and parts, it failed to protect Alaska Native culture.

The proposed rule change helps eliminate this wrong. Alaska Native artisans play an integral role in preserving and promoting culture; honoring past traditions as they create new works should not be a crime.

The views expressed here are the writer's and are not necessarily endorsed by Alaska Dispatch News, which welcomes a broad range of viewpoints. To submit a piece for consideration, email commentary@alaskadispatch.com.