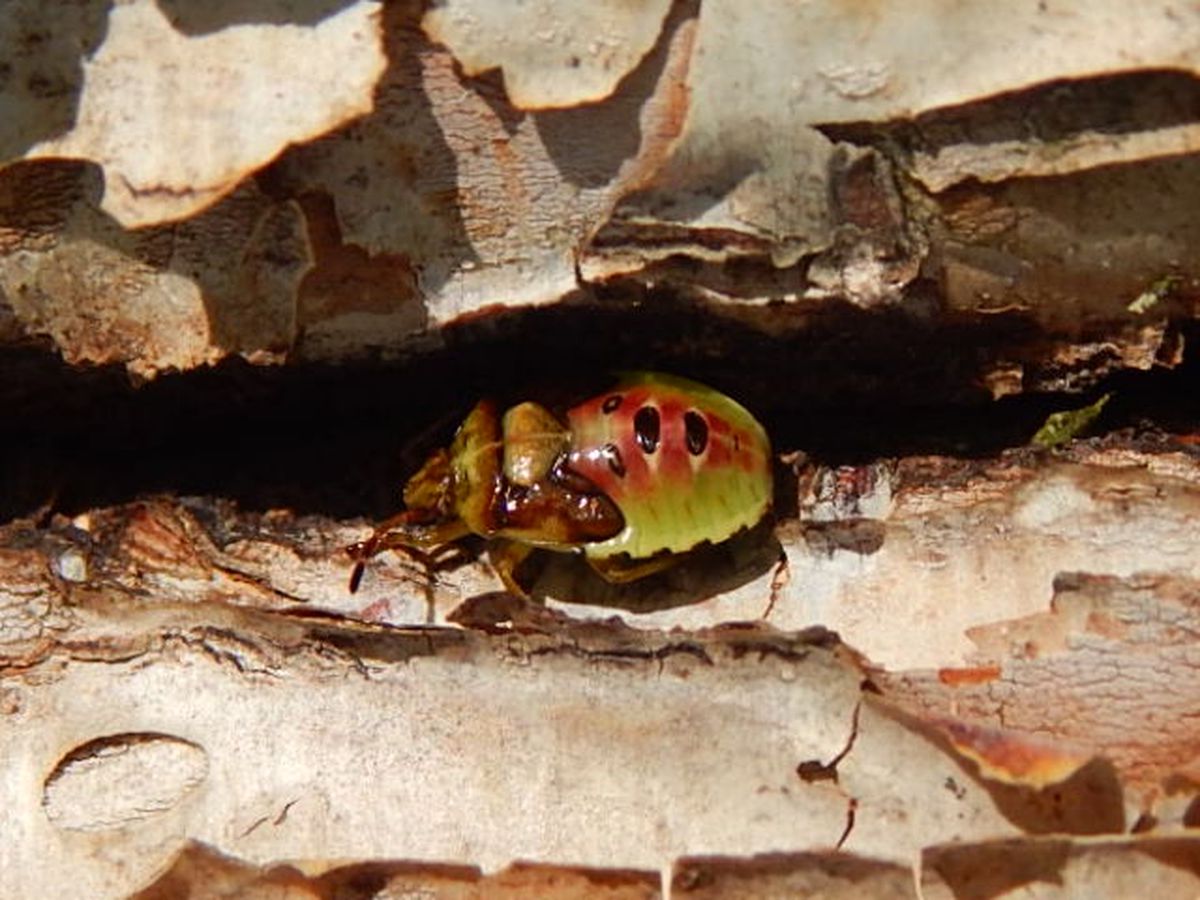 One of the things I enjoy most about parenting a 3-year-old is how her unyielding curiosity reconnects the adults in her life to nature.

Through young eyes, our garden has become more than a place where plants and flowers grow. It has transformed into a home for mysterious creatures and new life, a realm of discovery and adventure.

That's why I've been on a quest this week to identify and learn more about a mystery insect, which we now know as the common and resilient birch shieldbug.

Like a character from the Fantastic Four, this seemingly ordinary bug has extraordinary survival skills. With an effective onboard weapon system and a special ability to withstand the cold, there's a lot to appreciate in these tiny insects.

Recently, our daughter and her friend discovered a bright-green bug with a reddish-black, angular hourglass shape on its back crawling across the dirt among our yellow yarrow, purple salvia and light blue forget-me-nots.

The kids scooped the bug up and let it walk along their tiny hands, squealing with delight as they watched its every move, enthusiastically yelling, "Look! Look!" until it leaped off and made a safe escape.

Meanwhile, a few miles away, around the same time, a friend had found something similar in her yard. Same colors, but different pattern and shape. The bug she'd found was rounder.

Perfectly spaced black lines at its perimeter looked as though someone had used a running stitch to secure the bug's green-colored back plate to its abdomen. It had a bold black head and thick, shoulder-like mounds. The color red popped brightly in a y-shape behind four short black lines that completed its look.

Were these stink bugs? Shieldbugs (so named because their wings give a shield-like appearance)? Spybots? (After all, a nano-hummingbird first took flight in 2011, and Harvard University has already launched a robot fly and has an entire lab dedicated to microbotics and robotic insects.)

Queries were sent out. Facebook discussions ensued. Nerdy grandparents were called in for expert analysis.

Thanks to Derek Sikes, curator of insects and an associate professor of entomology at the Museum of the North at the University of Alaska Fairbanks, we have a definitive answer. Both are birch shieldbugs, or Elasmostethus interstinctus.

"I think they are one of our prettier bugs," Sikes said.

As their name suggests, these colorful bugs feed on birch trees, eating summer catkins as they prepare to overwinter.

Just as Pluto was demoted in 2006 from its status as a planet (it's now considered a dwarf planet), birch shieldbugs have also undergone reclassification. Formerly from the family of official stink bugs, or Pentatomidae, Sikes explained that birch shieldbugs are technically now considered parent bugs, of the family Acanthosomatidae, because the females guard their eggs and travel with their young.

Despite the classification change, they do still emit an unpleasant odor. Taxonomy aside, it's perfectly fine to call them stink bugs, Sikes said. The bugs give off a skunky, rotten-almond-like smell from repugnatorial glands when they feel threatened.

According to Sikes, the smell isn't as bad as it could be, thanks to their vegetarian diet. Carnivorous beetles are the bugs your nose should truly fear.

"I know some beetles that smell far worse — those that feed on dead birds and dead mammals. When they try to scare you with a bad smell it's far worse," Sikes said.

Birch shieldbugs also have a noted place in the history of Alaska's scientific discoveries. They're among the insects known to produce an antifreeze protein that allows them to survive Alaska's cold winters.

Although they are temperature tough, they're not totally immune to the cold like another science marvel — Alaska's roughened darkling beetle — which can survive above-ground exposure to temperatures of 100 below, according to researchers from UAF and the University of Notre Dame.

The unique beetle relies on a sugar-based polymer to prevent it from becoming what the research team referred to as a "bugsicle." The antifreeze properties prevent the watery cells in its body from turning into ice.

Decades before the roughened darkling beetle made science headlines, researchers from UAF were investigating the birch shieldbug.

Brian Barnes and Todd Sformo found the bugs could withstand very cold temperatures thanks to an antifreeze protein present within their system. The special protein allows the bugs to live through extreme freeze-thaw cycles.

The survival strategy is equal parts bug biology and bug smarts. The bugs need to take cover somewhere insulated so that the cold they can endure doesn't get too cold. Temperatures at or just below zero degrees Fahrenheit appear to be their survival breaking point.

In the years since the discovery of the protein, people have made efforts to take advantage of its properties in myriad ways.

"The discovery has launched a flurry of patent applications for everything from creamier ice creams to hardier plants. Hopes for the antifreeze protein include better ways to preserve human organs for transplant as well as environmentally safer airplane de-icers," reported National Geographic in a May 2003 article about the super-cool bugs.

Since the discovery of the single bug meandering in our garden last week, we've found several more clinging to the leaves on our birch tree.

According to Sikes, these birch shieldbugs are of minimal concern, unlikely to do much harm to the tree.

So we'll let them be, keeping a sharp eye out for a hoped-for glimpse of a mama bug and her brood, as summer cycles that much closer to fall.

The views expressed here are the writer’s and are not necessarily endorsed by Alaska Dispatch News, which welcomes a broad range of viewpoints. To submit a piece for consideration, email commentary@alaskadispatch.com. Send submissions shorter than 200 words to letters@alaskadispatch.com or click here to submit via any web browser.