Salmonfest captures the essence of why young Alaskans stay 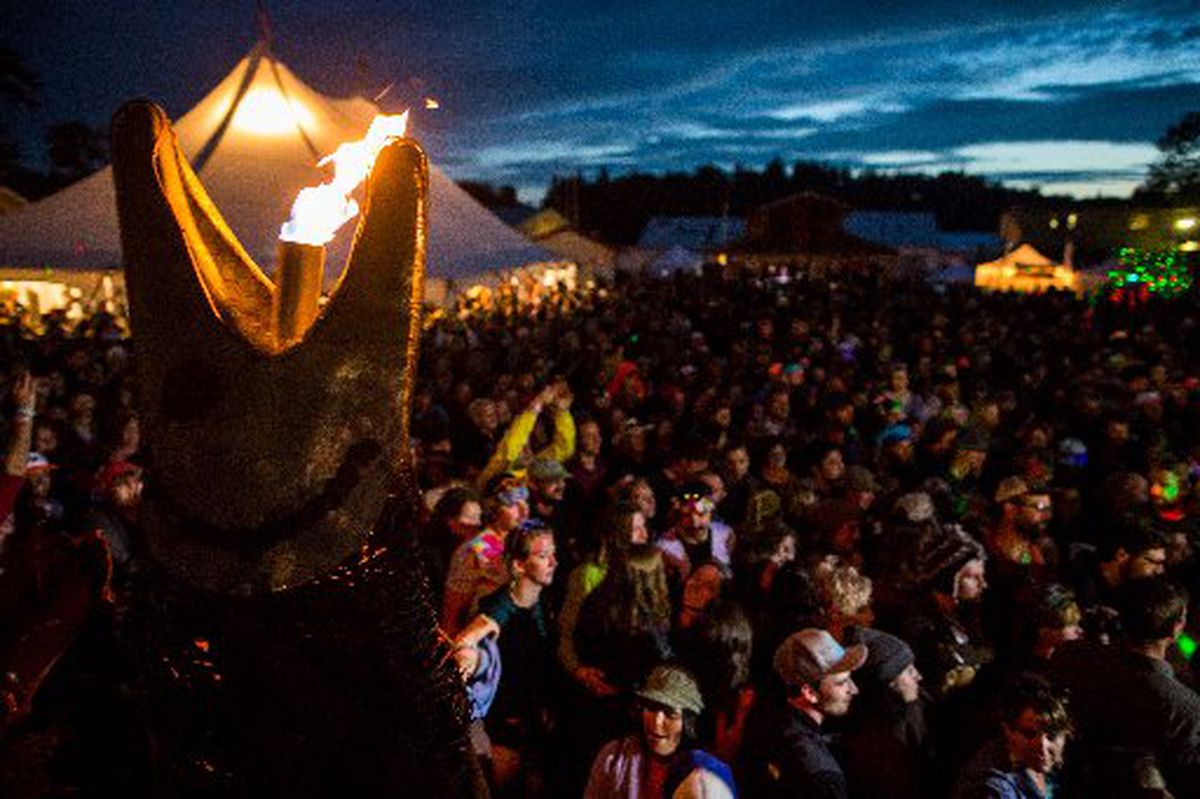 A salmon-themed torch lights the main stage during a set by the Latin-influenced dance band Ozomatli at Salmonstock (now Salmonfest) in Ninilchik in August 2014. (Loren Holmes/ADN archive)

A salmon-themed torch lights the main stage during a set by the Latin-influenced dance band Ozomatli at Salmonstock (now Salmonfest) in Ninilchik in August 2014. (Loren Holmes/ADN archive)

This weekend they'll be rockin' in Ninilchik as Salmonfest moves into its sixth year. A crowd of mostly 20- and 30-something millennials and Generation Xers will be putting on the uniform of  youth at this time and this place — jeans, Xtratufs and a hoodie. If it rains, and it always rains, they'll dig a rain jacket out of their backpack. Several thousand will be dancing in the puddles late into the night in homage to being young in the North and to one of the most important reasons to live here — wild salmon.

We baby boomers came as an exponential glut in the '70s and early '80s. Most never intended to stay more than a few years, make some money, have an adventure and go back home. But life happened: spouse, house, children, "the full catastrophe," to quote Zorba the Greek.  Most baby boomers have dealt with a nagging question of identity: "Where is home?"

Influenced by Edith Cobb's "The Ecology of Imagination in Childhood," Paul Shepard in "Nature and Madness" (Chapter 6) wrote that we bond to the place we lived when we were 11 or 12 years old. It's not a conscious thing, more something that gets into your soul — the angle of the light at different seasons, the scent of the air. And always there is the fort in the woods, likely the first place that was your place and the first place you experienced freedom, if only for an hour or so a day. To baby boomer Alaskans, home is aging parents and extended family support systems, but a lot of it is the spiritual ecology of the place you were from. Sometimes you live in your place, sometimes you don't.

Like Native Alaskans, most millennial and Gen X Alaskans built their fort in the woods in Alaska and this is their place of spiritual ecology. They know about the beautiful winter darkness and the long evenings of summer twilight. They know about the fall wind stripping the birch trees of their leaves and the blush of green on a spring hillside, both as certain premonitions of seasonal change. But for them the conflict of identity is a different question: "Why stay?"

Success is reflected in popular culture by a place, and that place is usually not Alaska. If you're a hipster, it is San Francisco or Portland; if you're a straight-edge professional, that place of success is a city: Chicago or New York. It's challenging to be hip in Eagle River, and the top law firms are in Washington, D.C., not Anchorage. Why stay?

Well, there are the mountains and unparalleled skiing, hiking, mountain running and myriad other cool activities. And there's the salmon.

The rise of farmed and ranched salmon and now GMO salmon and their corresponding corporate control has heightened awareness of the future of wild salmon. Add to that threats to salmon populations by past and potential habitat destruction, high seas bycatch or ocean acidification and temperature change, and there is cause for concern. The realization that Alaska is the last place of substantial wild salmon on the planet has forced us to examine our values and stimulated a modern salmon culture, much of it centering around millennials and Gen Xers.

Salmon art, murals, music and wearable art express an identity with this place and its salmon. I see young couples during dipnetting season walking down the Kenai beach carrying an ice chest and a dipnet. They are there to express the meaning of life in the North: shared outdoor activity.  Later, they'll have friends over to grill salmon and drink some beers. A Facebook post gets an "awesome" from dismal cohorts who have to live Outside. Mountains and salmon — the new cool. It's what we do.

Salmonfest has become a premier event to recognize the emerging urban salmon culture of Alaska. There might be a speech or two. There will be booths with pamphlets, and informative posters. But mostly it will be a place to dance for the salmon and celebrate being young in Alaska. Late at night, the beat of the drums and the rhythm of the guitars provide the answer to the question of "Why stay?"