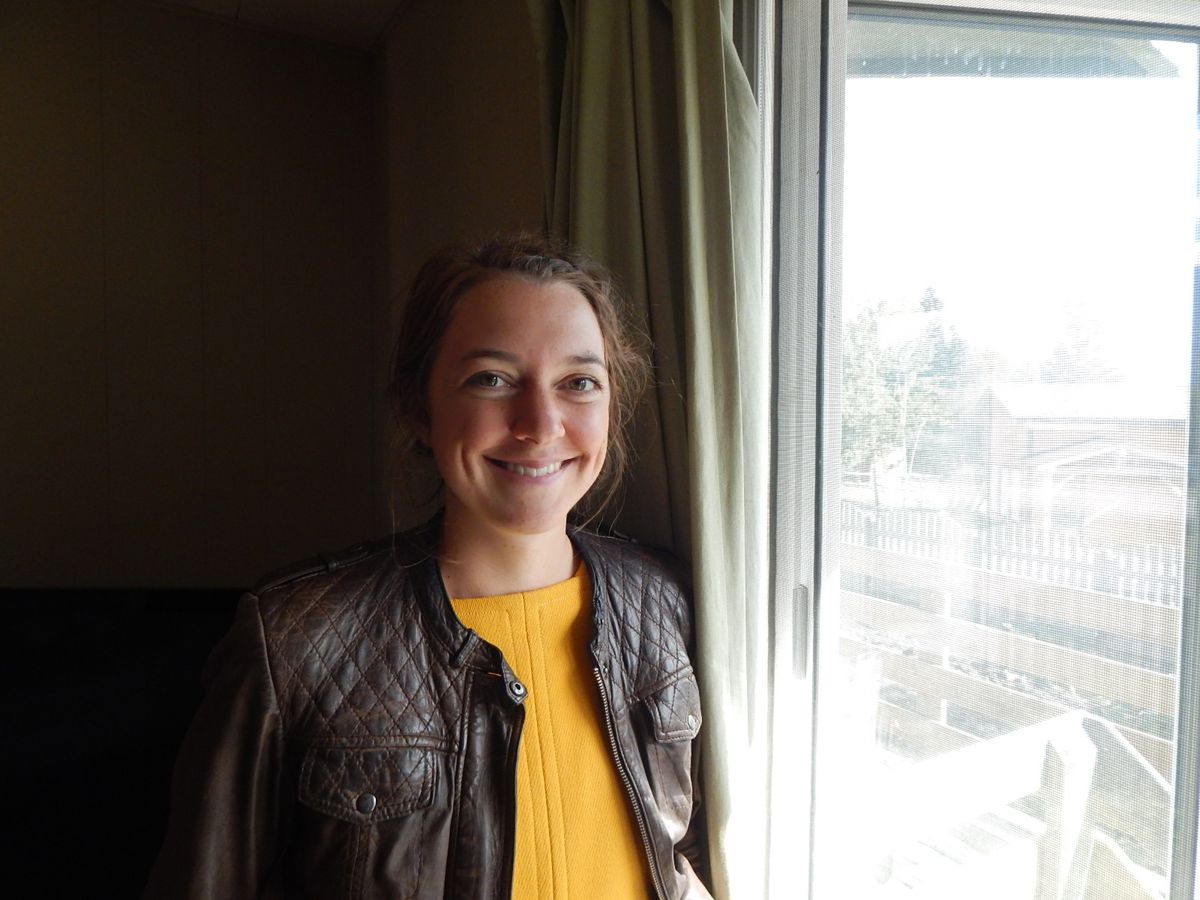 Toronto-based fashion designer Jacquelyn van Kampen, 29, stands in her studio space in Haines Junction, Yukon, on Aug. 27, 2016. She’s the community’s first-ever artist in residence. Her mission is to translate the mood and feel of the land into wearable art. She’s planning to debut a small collection of pieces inspired by the residency in October. (Jill Burke / Alaska Dispatch News)

Toronto-based fashion designer Jacquelyn van Kampen, 29, stands in her studio space in Haines Junction, Yukon, on Aug. 27, 2016. She’s the community’s first-ever artist in residence. Her mission is to translate the mood and feel of the land into wearable art. She’s planning to debut a small collection of pieces inspired by the residency in October. (Jill Burke / Alaska Dispatch News)

HAINES JUNCTION, Yukon — Surrounded by the St. Elias Mountains and the broad, changing landscape of the Kluane region, 29-year-old Jacquelyn van Kampen's mind swirls with tatters of inspiration — a structured cape, flowing fringe — ideas she captures in her small sketchbook.

The Toronto-based fashion designer has traveled here, to Haines Junction in the Yukon, for the opportunity to be the community's first-ever artist in residence, a three-month experience sponsored by the Junction Artists and Music Council.

It's meant to be a deeply personal experience, one that brings an artist close to the land and inspires her to translate the landscape into clothing. It's also meant to be a process intertwined with this community of about 800 people.

On Saturday, I found van Kampen at an arts and crafts gallery housed in St. Christopher's Church, which donates the use of its basement for artisans to display and sell their work.

Volunteering as gallery host, van Kampen wore a tailored dandelion-yellow dress and burgundy leather boots as she sat with a friend, pushing a needle through a fur cuff she was stitching onto a pair of leather moccasins. A spot of bright-red blood popped from her finger; she'd just pricked herself.

Like the gold and red colors of fall mingling among the green of spruce trees and aging leaves, van Kampen stood out.

An industrial designer by training who studied in the Netherlands, van Kampen has shifted her focus to wearable art. After an unsatisfying stint in the 9-to-5 workforce, she enrolled in Toronto's La Salle school of fashion.

She earned her place in Haines Junction during a three-day, "Project Runway"-style competition. Working on a limited budget, van Kampen utilized donated alpaca wool roving in the creation of a gown, cape and floor-length knitted scarf. The roving — long bundles of fiber — became the backless gown's long skirt.

"After doing that I was inspired to make things out of natural materials that had a warm and soft feel," van Kampen said. Wearing the dress, she said, was an enveloping feeling. Heavy but full of flow, "you kind of felt like the alpaca," she said.

It impressed the residency's judges.

"It's beautiful. It walks like a wave in the ocean. So heavy. So flexible. It was very impressive," said Heiko Haehnsen, a former landscape gardener and comic book designer from Germany who came to Haines Junction a few years ago and the driving force behind the "Sewing through the Landscape" residency.

Van Kampen's background, her creativity in working with different materials, and the quality of her work landed her the gig.

Haehnsen wants to bring outside artists into Haines Junction as a way to promote art within the region and beyond, as well as to promote the region itself.

"It brings a different vibe into the community. It felt like a good addition," he said, explaining that he's hoping to counter the Yukon stereotypes of long-bearded men and dog teams. He also sees the close ties between art and a community's overall vibrancy.

"Art is not something that stands apart from everything else. It is an important part of daily life and economic development," he said.

Van Kampen spent the first month of her stay getting to know the area and the people, making connections, staring at the mountains and learning traditional First Nations sewing skills, like how to work with porcupine quills, furs and feathers. Now, she's in design mode, conjuring up new styles.

"When you look at the landscape it's really easy to imagine it as a photograph or a painting. The challenge for me is to translate that into textile, to turn it into something you can wear and feel," she said.

Some ideas have been whimsical, like fashionable holsters for bear spray and a "berry-picking dress" adorned with giant, waxed canvas pockets, ready-made storage for the casual or avid harvester alike.

Outside her studio, the home of church minister Lynn De Brabandere, the mountains beckon. Clouds that hug the mountaintops evoke a fur collar. Ridgelines of different colored trees become a natural break. A waistline. An embellishment. The draping of new fabric.

"Every day I look at it I see a different outfit," van Kampen said.

In the mountain, she also sees a long, deep green wool coat donated to her by De Brabandere. The coat belonged to Carol Thomas, a woman who for decades served the community as a nurse. Thomas passed away earlier this year. For De Brabandere, pairing van Kampen with the coat seemed like a natural fit.

In a phone call from Vancouver, De Brabandere described Thomas as a "very down-to-earth" person who loved quilting and flowers, a woman of deep faith who, though generous with prayer, was lovably frugal.

She knew Thomas would have supported and encouraged van Kampen. Digging the coat out of the church's small thrift store to give to van Kampen made sense.

A story has made its way to van Kampen that on the day of Thomas' wake, flowers bloomed gloriously, an event van Kampen plans to incorporate into her repurposed design. She's envisioned embroidered flowers at the shoulders to represent the flowers at the side of the road the day the community celebrated Thomas.

"That's what I like about repurposing clothes. It had a life before you found it and you get to give it a new life moving forward," van Kampen said.

Van Kampen's work in Haines Junction culminates with a gala on Oct. 9.

Then, it's back to Toronto to continue work on launching her line of ready-to-wear women's clothing she describes as "down-to-earth dresses and jackets from quality materials." With her she'll tow a new prized possession, a knitting machine she picked up for $250 in Dawson City before settling into Haines Junction.

Her label, Kampina, gets its name from a nature park she frequented while studying in the Netherlands. Among nature, she felt her muse.

"Everything in nature is already done. It's beautiful. It speaks to all of the senses — sight, smell, touch. It's a comfortable place to be," she said. "The stillness, those moments of peace are when ideas come to me. It doesn't come together in idea form until I have that."

In this place of giant landscapes, long history and psyches deeply connected to the land, she's grounding herself further in her artistry and her dream of successfully making it as an independent fashion designer. Her motto? Say yes to opportunities, and whatever you're doing, do it wholeheartedly.

"That's who I am and that's how I think about my clothes," she said, explaining she likes things that are made well and made by hand. Things that will last a lifetime.