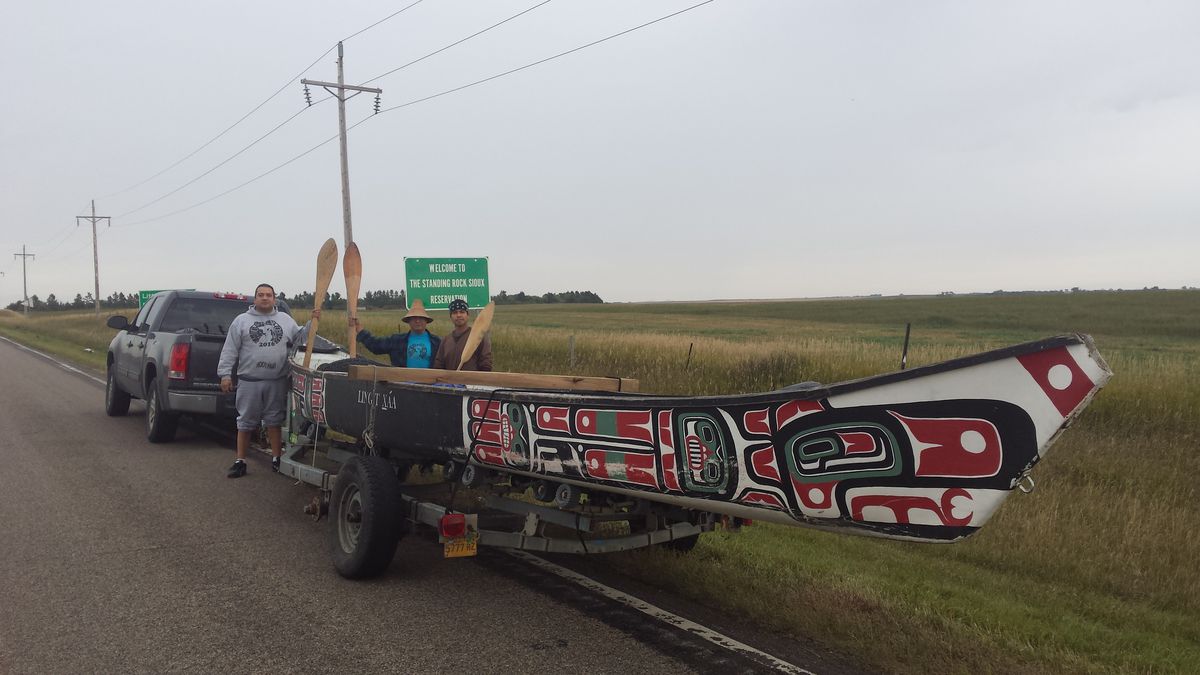 Members of the One People Canoe Society stand outside the Standing Rock Sioux Reservation in North Dakota with the Raven Canoe from Juneau on Sept. 6, 2016. The group made a journey of thousands of miles to North Dakota to join in a protest against an oil pipeline in the area. (Morgan Fawcett)

Members of the One People Canoe Society stand outside the Standing Rock Sioux Reservation in North Dakota with the Raven Canoe from Juneau on Sept. 6, 2016. The group made a journey of thousands of miles to North Dakota to join in a protest against an oil pipeline in the area. (Morgan Fawcett)

UPDATE: The U.S. government moved on Friday to halt a controversial oil pipeline project in North Dakota that has angered Native Americans, blocking construction on federal land and asking the company behind the project to suspend work nearby. Read more here.

Standing in the rear of a 30-foot fiberglass dugout-style canoe, Juneau artist Doug Chilton and his crew from Alaska's One People Canoe Society slipped away from the banks of the Missouri River Wednesday, making their way downriver, a long, long way from home.

Painted with bold red-and-black artwork, the Raven Canoe hails from the Tlingit and Haida clans of Southeast. Its launch from Bismarck, North Dakota, alongside approximately 18 other canoes marked the start of a three-day Missouri River Spiritual Journey of the Standing Rock Sioux tribe in protest against a 1,172 mile-long Dakota Access oil pipeline.

With rainclouds above and cries of "Water is life!" from crowds on land, Chilton gave the call: "Paddles up!"

"Hiya! Hiya!" the crew called back, bellowing the Grease Trail song, which is sung on all Pacific Northwest coast canoe journeys.

Nearly a dozen rowers held their hand-carved cedar paddles toward the sky until Chilton gave his second command: "Pull!"

Paddles descended into the water. With the Tlingit-Haida Central Council flag raised high and waving at the bow, they entered the current, joined by tribes across the nation who had answered the call for solidarity from the Sioux.

The Raven Canoe's sojourn is one part of a larger national Native American movement to support the Sioux in opposition to what many view as a risky pipeline project by Energy Transfer Partners. After environmental impact concerns were raised, the route shifted onto Native land, within a half-mile of the Standing Rock Sioux Reservation.

Opponents worry the pipeline, which will transport 470,000 barrels per day of  North Dakota oil to refineries in Illinois, imperils the Missouri and the Ogallala Aquifer. They cite the need for more evaluation, including the recognition and preservation of burial grounds and sacred sites, which have already suffered desecration.

While the legal battle over what's next for the Dakota Access pipeline hinges on a federal court decision expected to be handed down Friday, the tribe has also taken a physical stand, using human shields to block bulldozers and peacefully carry spiritual and moral messages.

"We are here for our survival. We have to have land. We have to have clean water," John Garcia, a Haida-Tlingit accompanying Chilton, said in a phone interview Tuesday as they made their way to base camp in Chilton's truck.

Less than 12 hours after the Standing Rock Tribe asked other canoe families to join them, Chilton had assembled a crew and headed out on a ferry last week from Juneau to Haines, the only way to reach the road system that would allow them to begin their more than 2,000-mile road trip to North Dakota.

The canoe made lasting impressions as it moved along Interstate 94 out of Washington and through Idaho and Montana into North Dakota.

The canoe is visually compelling, even more so when carrying paddlers in regalia who drum and sing. The canoe-laden trailer on the roadways intrigued people mile after mile, Garcia said, as a curiosity that opened the door for conversations about what they were doing and why.

"You just want to touch the canoe. We encourage that. And questions," Garcia said, explaining they welcomed the chance to share their beliefs and explain why they felt drawn without hesitation to the Standing Rock Sioux and Missouri protest. "It has seen many, many hundreds of miles on the water. Journeys. Hunting trips. It has a lot of heart and soul."

After living for decades in the shadow of the Exxon Valdez oil spill, Alaskans know firsthand the devastation that can happen and how much potential there is for what Yarrow Vaara calls "epic disaster."

"This is heartbreaking," Vaara, a member of the One People Canoe Society, said Tuesday evening in an interview from Juneau. "They moved (the proposed pipeline) downriver where it is closer to the reservation where people don't matter. It's blatant discrimination," she said.

Understanding what's happening in Standing Rock is important to being Native in 2016, Vaara said. The event has overtones of the stereotypical "cowboy-and-Indian" conflicts of old; but there is something in the fight for clean water, clean land and the health of future generations that people can rally around today.

Shared histories of colonization and oppression are bringing tribes and allies together in a way not seen before on such a large scale, she said.

The experience of paddling ties it all together. You travel close to the waterline, use hand-carved paddles, and work as a team to move forward in unison.

"It's kind of a transcendental experience. People can get in the canoe for five minutes and are never the same again," Vaara said. "It's dealing with culture in a physical and living way rather than as past history. We are living it and trying to breathe it; the water is so important to that," she said.

The staging camps feel more like a "big powwow" than a protest, said Bryan Harper, a member of the Coeur d'Alene reservation in Idaho, who camped close to the Alaska crew.

Tribal flags lined the single-lane road leading in and out of the campground. Surrounded by singing and storytelling, cooks worked around the clock to keep everyone fed.

"It feels like you are home. It's overwhelming. It's big. I'll remember it for the rest of my life," Harper said by phone Wednesday evening, adding he hoped to have a chance to paddle in the Alaska canoe.

"It was so beautiful," Harper said of watching the Raven Canoe make its way into camp. "I was thinking about them and how far they have come. I was thinking 'Man, these guys are soldiers.' We were all drawn to it. We are big water people too."

Just before Wednesday's launch for a 30-mile southward pull from Bismarck to Fort Rice in Mandan, North Dakota, the canoe families performed a water ceremony, pouring water brought from their homelands into the Missouri.

"This is our source of life. We brought it here to share with you," said the Puyallup crew before releasing a gallon of water taken from near Mount Rainier in Washington state.

On Thursday, the canoes will converge to form a flotilla at the Dakota pipeline drill site, a large island north of the confluence of the Cannon Ball River and Missouri.

"We are protectors. We are stewards of the land and the water that we live on. It is a very spiritual, deep feeling when we connect with nature," Garcia said. "If we don't stand up, who will?