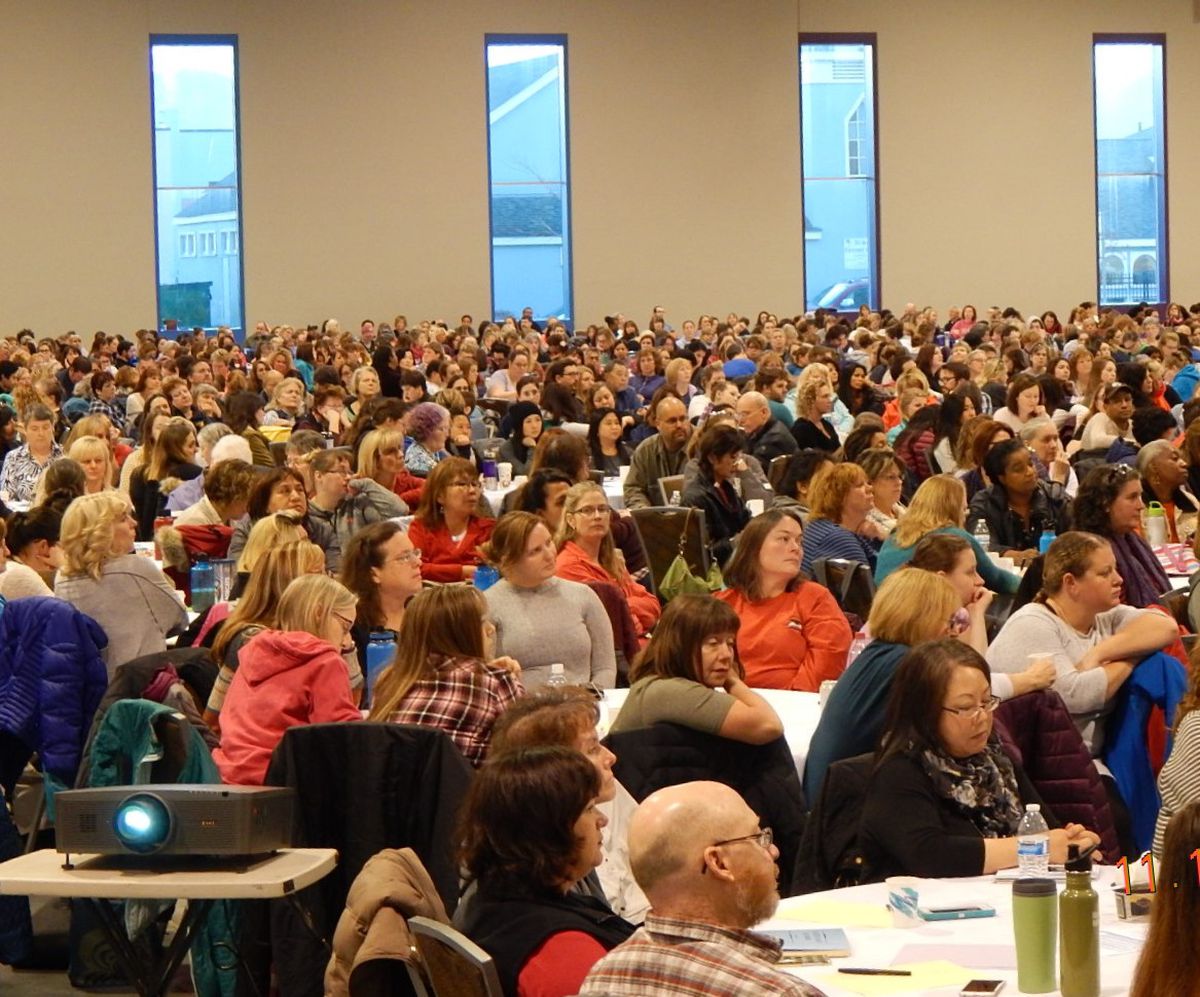 Three days after a divisive presidential election that painfully wrought our nation's beliefs and emotions on race, immigration, religion, sex, gender, wealth and poverty to the point of fracture, Anchorage educators spent a day looking inward, asking themselves if they are reaching every child, motivating every child, teaching every child as best they can.

"I am thankful we had the opportunity to do this. This is exactly what I wanted to see," said Michael Graham, chief academic officer for the Anchorage School District, who was among the crowd attending a Nov. 11 in-service day at Anchorage's Dena'ina Civic and Convention Center.

With nearly 1,800 elementary-school teachers and staff crammed into a first-floor meeting hall, First Alaskans Institute led a morning conversation about equity in education, expanding the reach of the institute's Alaska Native Dialogues on Racial Equity Project.

By the end of the day, some 3,500 elementary school employees attended the sessions.

Openly talking about racism and privilege can be uncomfortable. Practice helps. So does rallying around a common goal, which in this case was the best possible educational experience for all of the district's children.

The educators didn't come together because of this month's presidential election or the inflammatory rhetoric leading up to it. They came because while Anchorage is home to one of the most diverse school districts in America, within our city's classrooms many of the students are falling through the cracks.

From Zuni to Hmong, Yup'ik to Samoan, Spanish to Georgian, more than 100 languages are spoken within the district among its 48,000 students and their parents. But data show that diversity alone is not enough to create a comfortable or effective school culture.

A 2016 ASD School Climate and Connectedness Survey reveals only 38 percent of third- through fifth-graders feel treated with respect. For students in grades six through 12, less than half felt their teachers tried to represent their culture in class lessons, or that books and class teaching include examples of their racial or ethnic background.

District data collected in 2015 and 2016 show a disproportionate number of nonwhite middle and high school students received at least one F, and were more at risk for out-of-school suspensions.

"Now that we understand which student groups are struggling or not doing as well, we have a moral imperative to help all of our students achieve," Graham said. "If we're giving out F's and we have kids that are engaging and learning, how can they be failing?"

The 2016-2017 school year brings a shift from measuring student growth objectives, tests and teacher accountability to relationship building, getting back to what Graham says is the highest priority — "teaching our students."

The discussion took place on historical Alaska Native lands in a convention center named in honor of the region's first inhabitants, whose descendants are today a part of modern education and culture yet who do not see much of themselves reflected in classrooms or curricula.

"There is an invisibility that happens to Native people, and it is not neutral," Jorie Paoli, vice president and organizational advancement director with First Alaskans Institute, told the crowd. "When I can't see myself reflected in the things that are important to learn to be a good American, what does that say to me?"

"That brought it home. That kind of thing — 'My people don't count' — that's real. It breaks your heart. That should never happen," Graham said. "Each kid needs to know that they are important and that people notice that they are there."

Later, Paoli, who is Inupiaq, shared with the audience a time when her young son confided to her: "Mommy, I just feel like my life would be easier if I were white."

At its heart, the Equity in Education session asked every school employee to think about their individual experiences and actions and to consider how good intentions can have unintended impacts.

"You never know where your students are going to end up, no matter where they come from. Always remember your students come to you wanting to succeed," said the morning keynote speaker, Panigkaq Agatha John-Shields. "Everybody comes with a story. Listen to their story. Listen to everybody's stories," added the former Yup'ik immersion school principal who is now a teacher and doctoral student at the University of Alaska Anchorage.

The day's presenters used videos to help explain the concept of unintended impacts. The "Doll Test" video showed a study on student views regarding white and black dolls. Over and over the young subjects chose the white dolls as pretty and nice and the black dolls as bad and ugly.

"That really made people stop and think 'What are we as a society teaching our kids?'" said Graham, who'd seen the video in August at a similar presentation given to middle- and high-school educators. "I don't know how anybody could not be moved and realize that we need to pay attention to the messages we give to students as a society."

A second video, "Are Teachers Unintentionally Racist," discussed how what teachers believe significantly affects student outcomes. Unconscious bias can lead to advancing or holding students back based not on ability, but on race- or gender-based perceptions that have nothing to do with an individual student's talents or potential.

Even a teacher who is doing everything exceptionally can still do more to reach every student, Graham said. Understanding that is key to changing the data, to addressing an institutional problem evident in the experience and outcomes of Anchorage's diverse student groups.

The discussion energized Mariah Roederer and Kreston Neal, who teach fourth- and fifth-graders at Muldoon Elementary School. Roederer renewed her commitment to let students know, "Hey, I care about you." For Neal, it underscored the importance of social-emotional learning.

The teachers' Muldoon colleague Juan Medina recognized the value of seeking out a student's intelligence when language or cultural differences might otherwise allow it to get lost.

Medina said his Hmong and Samoan students sometimes struggle with writing, but when asked to record a video and talk about what they've learned, they're spot on. Many of his Alaska Native students struggle to show critical thinking skills in written work but are great at it verbally. So he's motivated to work both fronts — creating alternative avenues for his students to excel while simultaneously continuing to work on developing writing skills.

Finally, to help the individuals in the room prepare to have conversations about race, First Alaskans shared a three-minute video from Jay Smooth, "How To Tell Someone They Sound Racist."

Smooth focuses on dealing with "what they did" instead of "what they are" — "they" being the person who may have said or done something racist that you feel you need to address. What's important, Smooth points out, is "holding each person accountable for the impact of their words and actions."

The Anchorage School District is ready to hold itself accountable, auditing its relationship with all of its students so that every learner, regardless of their personal story, gets a chance to be themselves and to excel.