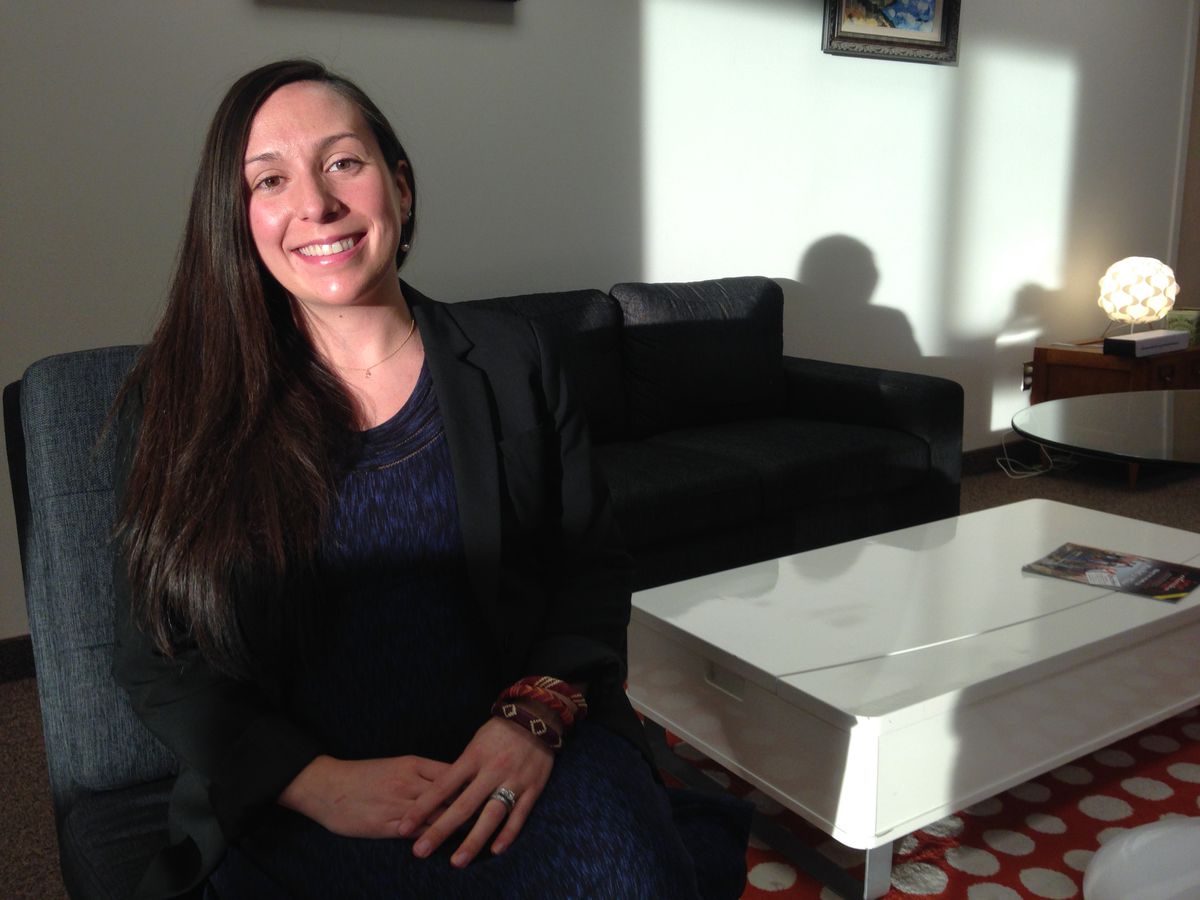 Mary Miner is working in Anchorage to change banking in African villages. The other three employees of her technology and finance company are in Paris, Philadelphia, and Kigali, Rwanda. Their product was built in Krakow, Poland.

Miner, 30, left to see the world a dozen years ago, like many college-bound Anchorage kids. When she returned in June, she brought the world back with her. And also brought back the guy she left with, now her husband, Jimmy.

They're expecting their first child next month, at the same time the company, called Atikus, launches products designed to revolutionize how small African banks make and finance loans to poor, mostly female clients.

This is not a solution to Alaska's brain exchange, our export of talented young people and import of professionals from other states. Miner is unique. But her example shows that startups in the innovation economy can touch down here as well as anywhere else.

Miner founded Atikus with Kate Woska, 26, who was working for Citibank in east Africa and is now in Paris. Miner had worked in microfinance in Ghana, helping a local bank making tiny loans.

Microfinance is a capitalist way of alleviating poverty. In the classic version, a loan as small as $50 creates the opportunity for a woman without other backing to expand a business, such as sewing or cooking, helping herself and her family to a better life.

Miner and Woska saw an opportunity to improve the system in Rwanda. They raised $950,000 in investor capital and received a $350,000 U.S. Agency for International Development grant. When their software goes live next month, they'll see how their ideas work.

Miner left Anchorage in 2005 with Jimmy, whom she had known since first grade, for DePaul University, in Chicago. After graduation, they took a year to travel the world with backpacks, staying in hostels.

She expected to return for a career in academia. But traveling in the developing world changed her. At each stop, besides looking for the best cup of coffee, she tried to find out what was happening in microfinance.

An experience in Cairo sealed her interest. The couple had planned to work for an environmental nonprofit, but when they arrived (before the Arab spring), the group had lost its grant funding and the project was off.

"That sort of got me thinking about social enterprise and the difference between nonprofit and for-profit," Miner said. Unlike charities, businesses can do good without relying on the generosity of funders. "It was another sort of turning point in my journey."

Back at DePaul, working on a management degree, Miner developed a research proposal to find out if financial literacy education could enhance microlending. A bank in Ghana took her up on the idea. She lived with a family there while working on her study.

The bank received funding from Kiva, an online microfinance charity that lets anyone choose a family to support and see the impact of the loan. In the field, staff take pictures and write up stories on borrowers for the website. By doing that work, Miner learned a lot about how microfinance looks from the other end of the pipe.

She also saw antiquated and inefficient processes at the bank. Paper loan applications were stacked over her head. Workers laboriously typed the information into outdated computers. Loan servicers went on foot to collect payments.

Woska and Miner also learned that banks in Rwanda were extremely conservative in their lending. Without insurance on loans they had to keep huge reserves of cash. If they were able to lend money as western banks do, much more of the capital could go out to borrowers.

The products the women developed will address three needs. A text messaging system will connect borrowers with financial literacy educators. Applications on tablets will allow loan officers to do their work in the field, without paper, and will collect data on borrowing patterns.

Atikus will also act as a broker to connect banks to insurers who could back their loans, freeing up more money. The data collected in the software will supply confidence to insurers. Miner hopes to begin writing policies in June.

Will all this work?

Eric McCallum, an Anchorage businessman who supports startups, and a family friend of Miner's, said the women have done something right that many entrepreneurs do not: They learned about market needs before designing their products.

"What's sort of interesting about what Mary is talking about is, why won't banks loan to their own population?" McCallum said. "It's because they're risk averse. Well, how do we lower that risk?"

[How years of wealth weakened Alaska's spirit of innovation]

McCallum has his own involvement with microlending, which he supports as philanthropy, not a business. In 2004, having made money in his company, Arctic Wire Rope and Supply, he connected with MCE Social Capital, which uses the assets of wealthy individuals as collateral on microloans.

McCallum recruited eight Alaskans who put up $10 million in assets. The money backs borrowing to fund microlending. The spread in the interest rate between the borrowing and the lending covers the cost of the program, which has grown to over $100 million nationally. With microloan repayment rates above 99 percent, McCallum and his friends feel their assets are safe, although they make no profit.

These are all great ideas, but what do they have to do with Alaska?

For Miner, like many of us, it's a question of where you want to live and raise your family. She and Jimmy always came back to fish a family setnet site in Bristol Bay. They never got Alaska out of their systems.

"Every time we came back to Alaska, it was harder and harder to leave," she said.

Although far from Rwanda, there is symmetry to her starting a business in Alaska with a baby on the way.

"We're supporting women microentrepreneurs. We're a women-run business. This is a central part of our life," she said. "How do we make it work?"