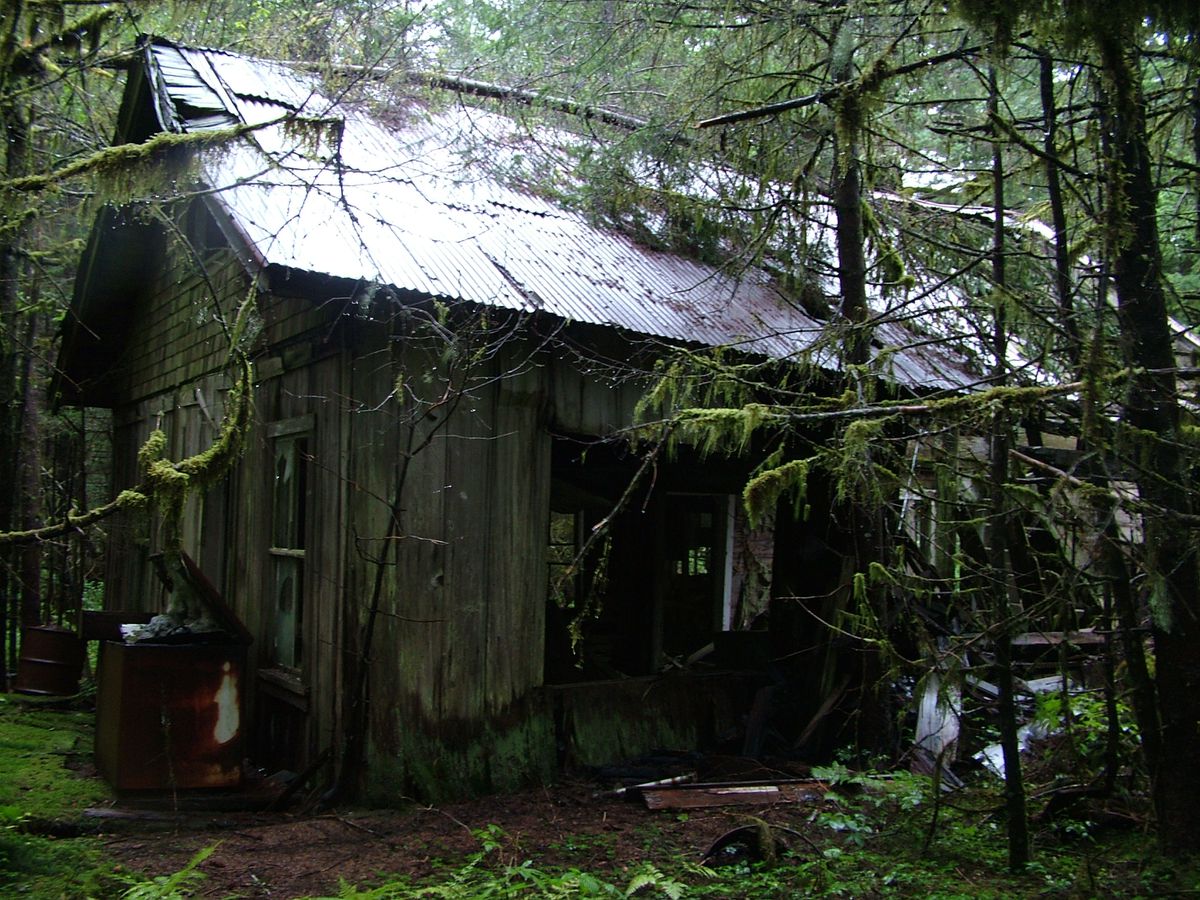 The ghost town of Katalla disappeared decades ago, leaving only a few collapsing buildings and overgrown rail lines. This image is from 2007. (Charles Wohlforth)

The ghost town of Katalla disappeared decades ago, leaving only a few collapsing buildings and overgrown rail lines. This image is from 2007. (Charles Wohlforth)

The ghosts of Katalla, on the lost coast east of Cordova, can finally rest their dreams of bonanza.

A deal went through last week to conserve coal on the Bering River that, more than a century ago, drove the hottest political issue in the country and helped bring down a presidency.

The town of Katalla died before World War II. Now the resources that created it are being tied up too.

And, in a neat historic twist, the deal by Chugach Alaska Corp. may be the first to use carbon credits intended to reduce climate change to keep trees standing on Native corporation land, said Josie Hickel, vice president of energy and resources for Chugach.

New Forests, a private equity firm in the carbon credit market, bought 62,000 acres of Chugach coal rights to be held by the Nature Conservancy and a Cordova land trust called the Native Conservancy. None of the parties to the deal would reveal the price or terms.

The forest on top of the coal, about 11,000 acres, will be sold on the California carbon credit market to offset emissions by polluters, said New Forests U.S. president Brian Shillinglaw. In total, New Forests will market credits on 115,000 acres of Chugach forest across the region.

Sale of those credits will require Chugach to manage the forest for growth for 100 years. Each year, it will be able to sell more credits on that year's additional growth. Sale of credits won't begin until workers inventory the forest next summer, Hickel said.

Will Langille, a veteran of the Klondike gold rush, arrived to pick out conservation lands for President Theodore Roosevelt. Traveling alone, he covered much of Alaska by rowboat, raft, launch, steamer, packhorse, snowshoe, dogsled and hundreds of miles on foot.

Langille witnessed massive land frauds. Gold rush stampeders were using the government's outdated laws to get control of anything of value, especially coal.

The hottest action was around Katalla, Valdez and the future town of Cordova, where companies competed to build railroads to the copper find at Kennicott, 200 miles up in the mountains. That prize belonged to the Alaska Syndicate, controlled by America's richest people, J.P. Morgan and the Guggenheim family.

Three companies pushed railroads from Katalla, with workers blowing up each other's tracks with dynamite and fighting in hand-to-hand combat with pick handles.

The town boomed. It had running water, electricity and telephones, a newspaper, businesses that included a confectionary and women's clothing store, lawyers and stenographers, and more than a dozen dance halls and casinos — and not one church.

When Roosevelt got Langille's reports, he acted quickly, created Chugach and Tongass National Forests, and froze all coal lands in Alaska.

The coal order hit Katalla hard. The Alaska Syndicate had a rich coal claim nearby, on the Bering River, of high-value anthracite. The syndicate planned to run its railroad on the coal and promised to build smelters and other industries.

The coal freeze remained in place when Roosevelt left the office to President William Howard Taft in 1908. Taft appointed as secretary of the interior a lawyer who had lobbied for the Alaska coal advocates, Richard Ballinger. Once in office, he approved the syndicate's claims, despite Roosevelt's order.

All this time, Roosevelt had been away on a safari in Africa. Pinchot traveled in secret to be the first person to meet him when he returned to Europe. After their talk, Roosevelt decided to run against his friend Taft to gain back the presidency. They split the vote in 1912 and Woodrow Wilson was elected president.

To respond to the Alaska controversy and break the so-called monopoly of the Alaska Syndicate, Wilson ordered construction of the Alaska Railroad, which founded Anchorage.

Meanwhile, the railroad to Kennicott had already been built, through Cordova, and ran on oil, not coal.

So the story would end, except that Chugach Alaska selected the Bering River coal lands under the 1971 Alaska Native Claims Settlement Act, finally putting them in private hands.

I went to Katalla in 2007 with Rick Steiner, a conservation biologist working to stop development of Bering River coal, recruiting conservation buyers for Chugach and for owners who had acquired much coal, Korean Alaska Development Co., or KADCO.

We walked through stormy rain in that dim, spooky forest, where trees grew up through a once-elegant house. Hiking between tussocks divided by small pools, I realized I was stepping on railroad ties that had been completely covered by moss and swamp cabbage.

A friend working in a fishing lodge had pulled back a carpet of moss to find billiard balls. We stumbled upon gravestones in the forest for two young men who drowned in the 1920s.

That this town could come back to life always seemed far-fetched. But the Koreans created a plan for their mine in the 1990s and believed in it strongly enough to refuse an offer in the millions from conservationists.

Today, low coal prices make Alaska projects uneconomic. Chugach is probably not sacrificing anything by selling its Bering River coal, and will likely benefit by posting a tax loss, Hickel said. She said Chugach's sale may pressure KADCO to do the same.

The timber deal is more exciting. Chugach will earn many millions for growing its trees, will protect the ecosystem and will create jobs managing the forest, with thinning to promote growth and prevent fires, Hickel said. Shillinglaw said this is also the most profitable use of the forest — just letting the trees live and absorb carbon from the air.

As Alaska's history turns to a new chapter, I hope there are more of these alliances. We've been living the boomer vs. conservation story long enough.