At 100, Fairbanksan Al Weber finds himself looking ahead, not back 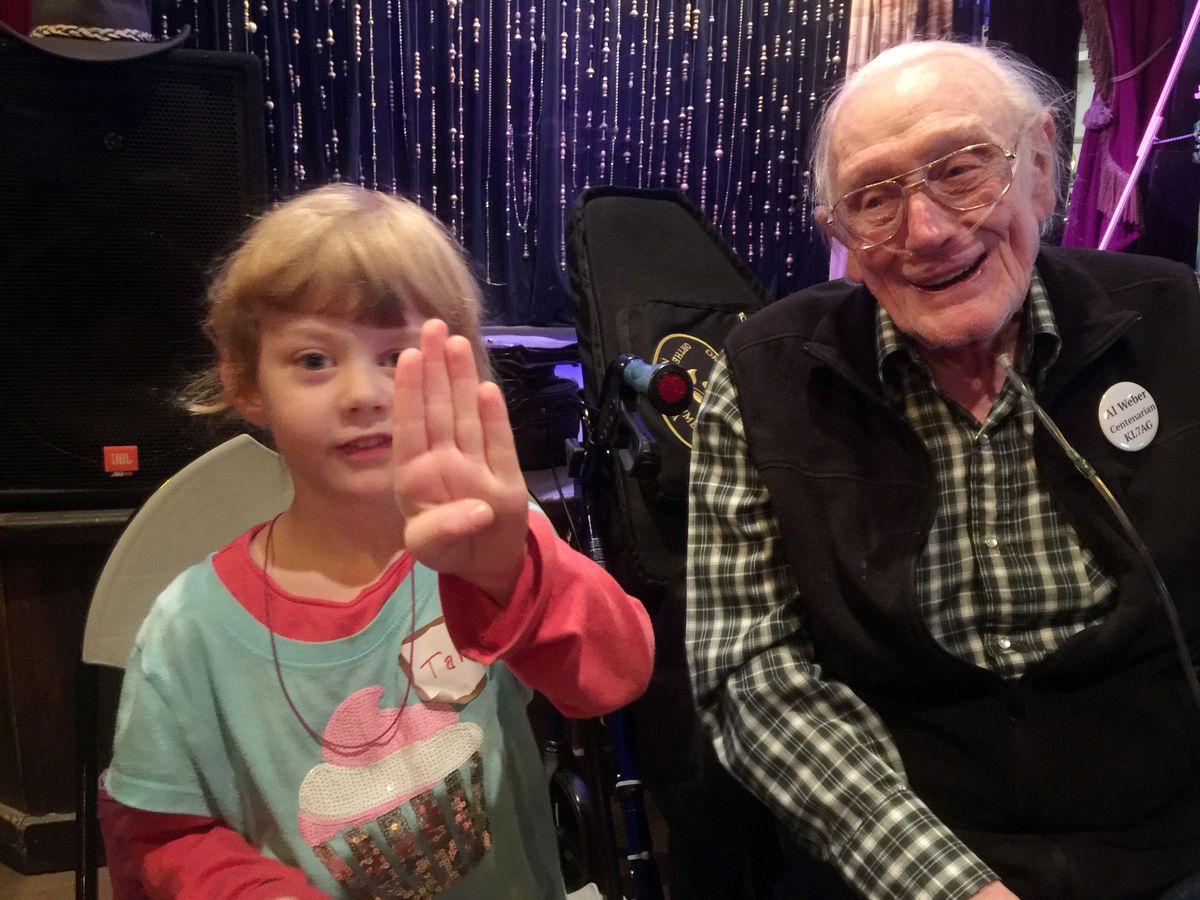 FAIRBANKS — Al Weber doesn't hold back,  even when the discussion wanders onto the topic of a "cutoff date" and what the future holds.

When he was 95, he told the people making music with him that they might want to look for a recruit of more tender years. "I've got a cutoff date at 107," he would say. "That's a good number."

Last Sunday, when about 75 of his family members and friends gathered at the Palace Saloon to celebrate his first century, Weber stood up without his walker and launched into what sounded like a stand-up routine, saying if had had known he would live this long, he would have taken better care of his knees.

"I look around and I see a face and it's vaguely familiar," he told the birthday crowd. "I think back, oh my God, that must have been 100 years ago. Probably was."

Hoisting a piece of cake on a plate above his head, he thanked everyone for coming and said, "I think I'm gonna probably shoot for another 100."

More than two dozen musicians gathered near the stage with guitars, harmonicas, banjos, violins and other instruments, with Weber playing along on his autoharp and singing. For a couple of hours, almost everyone in the room took a turn sitting next to him and Weber would put an arm around each person, exchanging a joke or a greeting.

There was only one person in the room born in 1917.

I think the youngest was Tara Woolery, who held up four fingers, but said she is really "four-and-a-half." Her dad, Patrick Woolery, serenaded Weber on the bagpipes and it was her grandmother, Tamar Stephens, who taught Weber how to play the bagpipes.

Thanks to such connections made through music, work, ham radio, sports and chance encounters, the room was packed with friends of Weber.

The first thing that many people notice about Weber is his Jersey City accent, which a hitch in the Coast Guard, starting in 1935, did little to erase.

"I was a Depression kid. We didn't eat much. 'Ya hungry? Take a drink of water.' I heard that so much that I can even pronounce it Jersey style," he once told an interviewer.

Weber said he bailed out of his hometown at 18 and has been back twice, for a grand total of about 24 hours. Jersey's loss was Alaska's gain.

He's had decades of adventures here, working in radio and communications and touching down all over the state. He trained bomber pilots to use radios in World War II, was a radio engineer, worked at the Gilmore Creek satellite tracking station, repaired and sold radios and tinkered with electronics.

The second thing people notice about Weber — and this is a lesson for which his friends will be forever grateful — is that he doesn't act his age. That is, if you believe that acting his age means turning inward, dwelling more on the past than the present and counting everything that has been lost.

Advancing years have taken a toll on his health and staying power, but what he can do is entertain himself and have fun in the presence of others, an attitude that spreads faster than any virus.

If you saw him singing and playing at the Pioneers Home, where he lives, you would take him for a gregarious social worker getting paid to try to boost morale.

Fairbanksan Tim Quintal tells a story about an incident 45 years ago that illustrates the Weber way. Quintal was a young guy fresh out of college who happened to be driving a Volkswagen Beetle on College Road one day in 1972.

Suddenly, a stranger driving in the other direction did a 180-degree turn and came up in a hurry to the VW. Quintal pulled over to see what the trouble was. The stranger marveled at the great whitewater canoe atop the VW and just had to know more about it. That was how Quintal became friends with Al Weber.

Weber breathes with an assist from an oxygen tank, which has hampered his playing of the bagpipes and the didgeridoo, though he can still handle the violin, autoharp, washboard, harmonica, ukulele and anything with strings. He doesn't need to be asked twice to break into "Show Me the Way to Go Home" or "Has Anybody Seen My Gal?"

His room at the Pioneers Home has space for his amateur radio, his instruments and a library's worth of sheet music supplied by his friend Theresa Reed.

Weber's wife of nearly 60 years, Florence, lives in the Pioneers Home in another room a short walk away and is incapacitated. Florence authored or co-authored more than 100 publications and is one of the outstanding geologists in the history of Alaska. She received an honorary doctorate from the University of Alaska Fairbanks in 1987.

Apart from their work lives, Al and Florence took part in many activities together and traveled the world. "On my 60th birthday, I chased a woman up a hill and caught her," Weber said of a bicycle trip with Florence in New Zealand.

I stopped by the Pioneers Home on a day when Al and his friend Courtney Linkous led a sing-along. The nurses brought Florence to the activities room to join the audience. Al smiled and said, "Hi ya kid," as he bent over to kiss her.

I asked him that day why he thinks he has lived to reach 100. "Because I kept breathing," he said.

Other than that, "I haven't a damn clue. None."

"I've wondered that too because many times I have written me off," he said. "I am not what you would call a religious person, but there's such a helluva lot more about life than I know. There's got to be more somewhere. It ought to be pretty interesting if we have any awareness of it."

"I've been damned lucky. That is for sure. Luckier than I deserve," he said.

The crowd that broke into "For He's a Jolly Good Fellow" to cap off his 100th birthday party would dispute that.