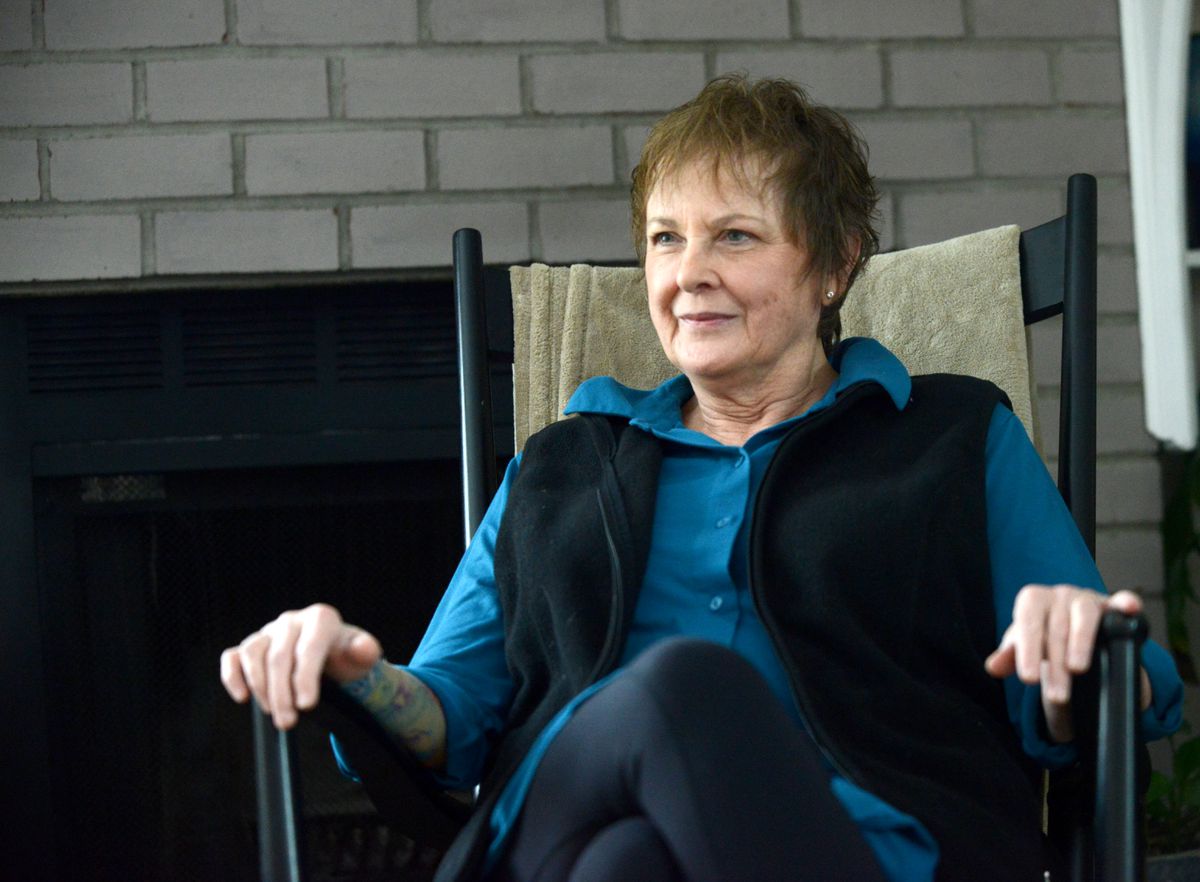 Kay Brown, who served in the Alaska State House for 10 years, refused to attend a closed majority caucus when she arrived in Juneau as a freshman legislator in 1987, a stand that forced the meetings open for a number of years. She will be inducted into the Alaska Women’s Hall of Fame on May 4. Photographed in her Anchorage home recently on Friday, Feb. 17, 2017. (Bob Hallinen / Alaska Dispatch News)

Kay Brown, who served in the Alaska State House for 10 years, refused to attend a closed majority caucus when she arrived in Juneau as a freshman legislator in 1987, a stand that forced the meetings open for a number of years. She will be inducted into the Alaska Women’s Hall of Fame on May 4. Photographed in her Anchorage home recently on Friday, Feb. 17, 2017. (Bob Hallinen / Alaska Dispatch News)

As soon as she got to the Legislature, Kay Brown put her political future on the line with a stand that infuriated many of her overwhelmingly male colleagues.

She sent an open letter to her first majority caucus meeting saying she would refuse to attend unless the media and the public were let in. By legislative tradition deliberations happened in private, although the law said otherwise.

It was a unique moment of courage, as Anchorage Daily News columnist Suzan Nightingale noted at the time. Brown was likely to pay a price.

"I applaud and marvel at the sight of one member of an extremely powerful peer group standing up and saying, 'Not this time.' It seldom happens in politics, especially when there's no payoff," Nightingale wrote.

Brown left the Legislature 20 years ago and retired recently as executive director of the Alaska Democratic Party. May 4 she will be inducted into the Alaska Women's Hall of Fame. Her remarkable career of public service contained too many accomplishments to list here.

But the showdown over open meetings in 1987 stands out as an example of how a leader should behave.

Brown was born in 1950 in Fort Worth, Texas. Even after 41 years in Alaska she still talks like a Texan. Her mother was a teacher and her father a Southern Baptist theologian and professor.

Her church was extremely conservative, but Brown's father stood up for racial progress. She remembers a bitter fight for a Nigerian seminary student to be allowed to attend, the first black member.

That religion didn't stick with Brown — she is a Presbyterian now — but her father's ethics did. Tragedy may have helped imprint those values. Brown's mother died when she was 15 and her father when she was 21.

Finishing a journalism degree, Brown was alone, with no reason to stay in Texas. She worked for a few years in Atlanta and then took a job as a reporter at the Anchorage Times. Her long, sophisticated articles took on big issues facing the state at the time, including creation of the Alaska Permanent Fund.

An ethical fight arose right away. Brown and other reporters tried unsuccessfully to form a union to resist publisher Bob Atwood's habit of slanting news coverage to suit his opinions and political crusades.

Brown had been in Alaska only two years when she got a job with the Legislature working on oil and gas issues. In 1980, only 30 years old, and without a background in economics or industry, she became head of the state agency that oversees the oil and gas resources.

Alaska oil production was at its height. Brown set to work increasing the revenue it produced. Her division revised contracts with oil companies, created a new system for bidding on oil leases and set up oil royalty sales that brought in billions.

I asked how she did that without a professional background.

"I worked really hard, coming in as a young person, and as a woman, and as a non-oil industry person, to be able to demonstrate that I could intellectually compete and handle the job, by just devoting the time and the energy to master the material," she said.

Former senator Johnny Ellis told me Brown was the hardest-working person he ever met in Alaska politics. Kenai Borough Mayor Mike Navarre, who served with Brown on the House Finance Committee, said she was so well organized and prepared that others consistently relied on her for details and explanations.

Brown also compensated for her youth and gender with her authoritative manner, and I think she still does. With me she has always been dignified and reserved.

She is not an easy person to interview. She doesn't let her guard down and she pushes back when the conversation is going a direction she hasn't chosen.

I asked her about that, too.

"You have to play the role," she said. "The roles I've been in have varied, but I've always thought, 'OK, what characteristics do I need to enhance, or work on, or bring forward, in order to be successful in this role that I have now?' "

Male legislators could afford to be good old boys or clowns. They had more ways to play the game. For Brown and other women of her generation, only strength and competence would do.

I could cite many examples of how these qualities played out, but that caucus meeting in 1987 stands out.

After the Watergate scandal of the early 1970s, the Alaska Legislature passed strong requirements for open meetings and open records. But while local governments complied, the Legislature ignored its own law.

The League of Women Voters and Anchorage Daily News sued in 1986 and won in the trial court. The House was ignoring that order when Brown made her stand in February 1987.

The House leadership backed down, partially and grudgingly. Four rural legislators walked out and would not participate in the open meeting. Brown said one legislator never forgave her.

Later the same year, the Alaska Supreme Court ruled that a lawsuit couldn't force the Legislature to follow its own rules, because it is an equal branch of government. Several years later, the Legislature changed the law to exempt itself from open meetings.

Ironically, the law today says all public bodies must work in public, but defines the Alaska Legislature as not being a public body.

Still, the meetings Brown forced open stayed open for many years. This year, the mostly Democratic House majority has returned to holding many open caucus meetings.

Brown downplays the open meetings incident. She's right, she has many other accomplishments to her name, including work on open records, domestic violence, environmental protection, family and medical leave, privacy and fiscal policy. She had a key part in creating the Constitutional Budget Reserve that is keeping Alaska afloat today.

But I think how she did those things matters even more.