Moms of opioid addicts touched Sullivan's heart, but will he use his vote to help them? 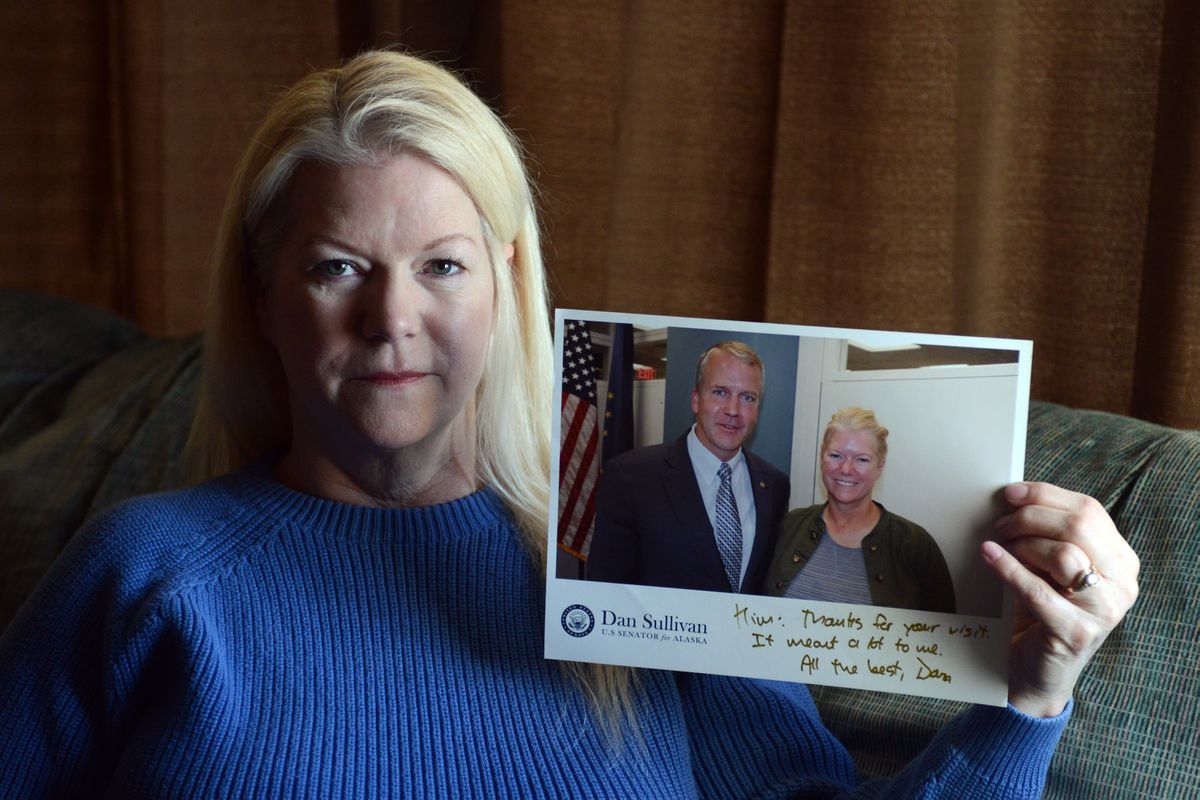 When Kim Whitaker told Sen. Dan Sullivan the story of her daughter's lifelong addiction to heroin, he was so moved he set up a summit meeting. But Sullivan hasn't taken a stand on ending the most important resource for helping addicts like her daughter.

Sullivan could hold a swing vote in the U.S. Senate on Republican proposals to roll back the expansion of Medicaid contained in the Affordable Care Act. The money has provided 16,000 Alaskans with behavioral health treatment, most of it for substance abuse.

Whitaker, who started a nonprofit organization to get addicts off the street, said Medicaid expansion is the key.

"It made a humongous difference," she said. "We couldn't do what we do if we didn't have Medicaid expansion. I don't know what we will be able to do without it. We won't be able to do anything."

Recovery from opioid addiction requires expensive treatment and medication. After a supervised detox stage, which takes 10 days, addicts need a monthlong rehab to change their thinking and patterns of behavior. But when they ask for help, they usually have no money or insurance.

"The first thing I do is head down to the Medicaid office and have them apply, because they do qualify," Whitaker said. "That's the first step in recovery, and if that's taken away, it will be devastating. I get a lump in my throat just thinking about it."

She did not know that Sullivan has not taken a position on repealing the aid.

"Sen. Sullivan will not vote against this. I guarantee that. He knows how important it is. He has three daughters. When we talked to him in Washington, D.C., he cried," she said.

But, if so, Sullivan wouldn't tell me. I requested an interview or statement on Wednesday but did not receive one.

[After a daughter's heroin overdose, an Alaska mother's grief]

The Republicans can afford to lose no more than two members on any party-line vote in the Senate.

Sen. Lisa Murkowski already announced, in a speech to the Alaska Legislature last month, that she will not vote to repeal Medicaid expansion. Her speech came a week after Gov. Bill Walker made a disaster declaration, of the kind used for floods and earthquakes, to respond to Alaska's exploding opioid crisis.

In fall 2015, Whitaker and seven other Alaska women shared a hotel room in Washington, D.C., on a trip to meet Sullivan. Terria Walters was there too.

Walters, who now runs an addiction ministry in Palmer, said she was hooked on heroin two decades ago and begged a hospital for treatment. Without insurance, she didn't get help and began to medicate herself with methamphetamine. She spent five years in prison for making the meth.

Her son, Christopher Seaman, was 13 when Walters was arrested. He also got addicted to heroin. In June 2015, he was killed near a fireworks stand on the Parks Highway. Walters suspects it was a drug robbery.

"Because of the epidemic, people are dying left and right," Walters said.

In 2015, 129 Alaskans died of heroin and prescription opioid overdoses. That doesn't count the cost in crime driven by addiction.

But Walters also saw how Medicaid expansion helped with the problem. It reached Alaskans three months after her son's death. Her roommate, Mica Messinger, used the coverage to get Vivitrol, an opioid-blocking medication. After 17 years of heroin addiction and stints in jail, he has been clean since May.

"Had I not had the Medicaid, who knows what would have happened," he said. "Now I go to work every day."

When Whitaker and Walters visited Sullivan in 2015, he listened. The experience spurred him to set up a major meeting on the opioid crisis in August 2016, bringing together key government and health officials, Alaska's congressional delegation and U.S. Surgeon General Vivek Murthy.

In front of the auditorium at Mat-Su College, Whitaker stood face to face with Murthy and told her daughter's story again. A doctor's prescription hooked her on opioids at 19, she tried to kick it three times, and now, at 36, she is still hooked.

Whitaker's daughter has overdosed and has been saved medically. Whitaker wonders each morning if she will learn that day that her daughter has died.

Whitaker runs an in-home day care she has operated for many years but she has also started an organization to fill a critical need for addicts.

When an addict asks for help, Whitaker takes advantage of that moment of clarity. She immediately steps forward to take the addict through the complicated and time-consuming process of getting coverage and treatment. Otherwise, they often begin using again before treatment can start.

Whitaker is also trying to organize services among agencies and medical providers around Anchorage.

She never saw herself in such a public role.

"It kind of makes me laugh. I'm a high school grad. I have no record of speaking publicly or anything. All I can say is I am a Christian," she said.

I hope Sullivan doesn't reward her work and their connection with a terrible setback.

He met with members of the Alaska Dispatch News staff last summer before the opioid summit. It was clear to me he was sincere about his concern and energized by his ability to bring attention to the problem.

At the same time, he will come under pressure from his party to keep the oft-repeated promise to repeal Obamacare.

In a sense, he is as new to this situation as Kim Whitaker is. The U.S. Senate is Sullivan's first elected position. He may not have faced an issue as tough as this one before.

A wise former statesman, now dead, once told me that every politician has to make bad votes and unpleasant compromises to accumulate the power to do good. The test comes when an issue touches your foundation as a person and you have to choose between more power and your own soul.

Kim Whitaker seemed to have total confidence in Sullivan.

"Lisa Murkowski and Dan Sullivan have been huge supporters of everything we do," she said. "There is no way Sullivan is going to take away our Medicaid."

Correction: An earlier version of this column said no suspect had been arrested in the murder of Christopher Seaman. Joshua Beebe was indicted for the crime in 2015.