Oh please, no controversy on campus! 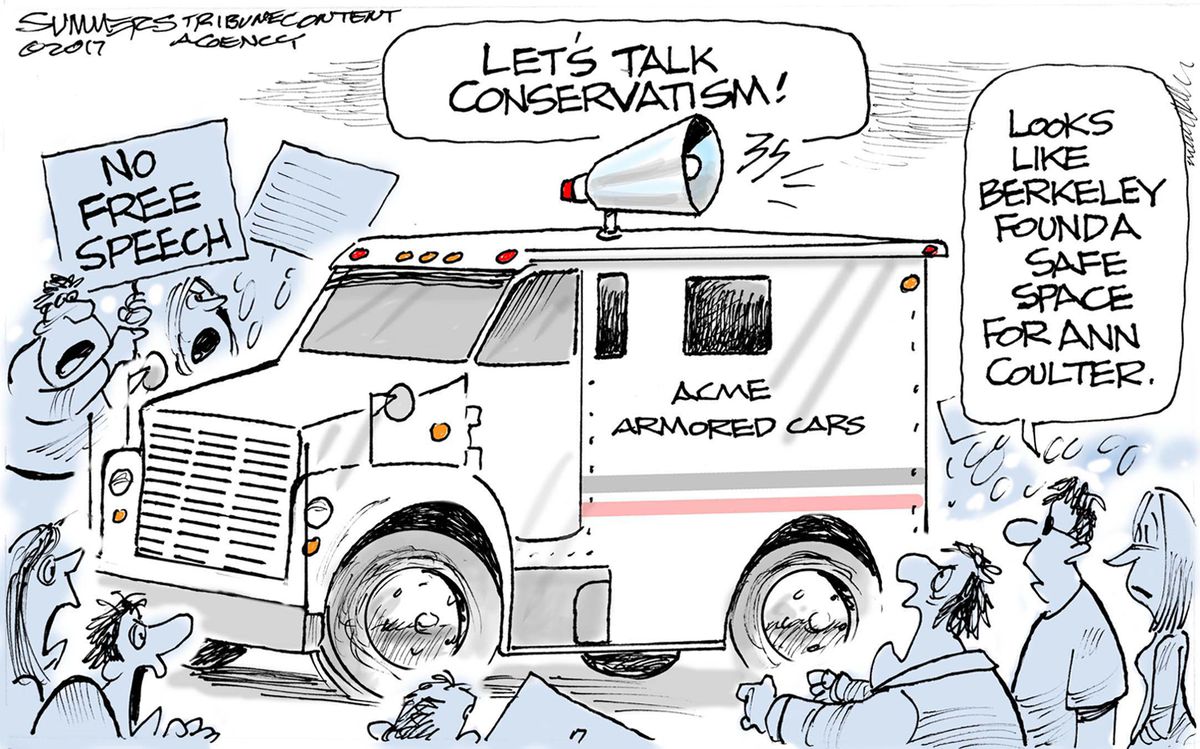 Don't blame college students for their hostility to free expression. The fault ultimately lies with cowardly school administrations, who so often cave to student demands for censorship. Or, as some now prefer to call it, "empowering a culture of controversy prevention."

Those are the actual, Orwellian words of an official at American University.

Several weeks ago, a fraternity at AU, Sigma Alpha Mu, began planning a fundraiser for a veterans' organization. Student groups often center fundraisers on athletic tournaments, fraternity president and sophomore Rocco Cimino told me, but all the popular sports had already been claimed. The fraternity members decided to go with … badminton.

To jazz things up, they called their event "Bad(minton) and Boujee." It's a pun on "Bad and Boujee," a popular rap song by the group Migos about being newly rich and hanging with materialistic women. Sigma Alpha Mu registered the fundraiser on American's online scheduling system, required for all campus events.

A few days later Cimino got a strange email from the school.

Colin Gerker, assistant director of fraternity and sorority life, said the word "boujee" might be criticized for "appropriating culture." He would not approve the event unless the fraternity changed the name.

"I want to continue empowering a culture of controversy prevention among (Greek) groups," Gerker wrote. He advised them to "stay away from gender, culture, or sexuality for thematic titles."

The students were perplexed.

A brief etymology, for those not familiar with "boujee": The word originates with the Latin for castle or fortified town, "burgus." This evolved into the French "bourgeois," for people who live in town rather than the countryside. Town dwellers were more likely to engage in commerce and craftsmanship,  so rose over time to achieve middle-class incomes. That's why Karl Marx later used the term to derisively refer to the class that upheld capitalism. Over time, "bourgeois" morphed into a more generic description of middle-class (and eventually upper-middle-class) materialism and obsession with respectability.

More recently, "bourgeois" was shortened to the colloquial "bourgie," alternately spelled "bougie" or "boujee," used disdainfully to describe upper-middle-class or high-end tastes (driving your Prius to Trader Joe's after yoga class, for example). The "boujee" variation is common when referring to middle-class or upwardly mobile blacks, as in the Migos song. That's hardly this spelling's exclusive usage, though, as is evident from its entries in the crowd-sourced slang glossary Urban Dictionary.

[Safe spaces on campus? How about just growing up]

When the fraternity was accused of "appropriating culture," the obvious question was: Which culture? Latin? French? Marxist? Urban hip-hop? Maybe their own? After all, if you're wondering who best epitomizes today's upper-middle class, bear in mind that these are college kids whose parents pay extra money on top of tuition to throw parties.

Figuring the administration misunderstood what "boujee" meant, Cimino challenged the school's ultimatum. He explained the term, and added that this was just a regular sports tournament with a punny name. Otherwise it had nothing to do with the content of a rap song, in case that was the concern.

But Gerker ceded no ground, reiterating that the fraternity was "appropriating culture," and added that in the interim he had received "multiple complaints" about the event title.

"I am awaiting a response from some folks on how they want to move forward with their complaints," he wrote.

Still puzzled, the fraternity asked whether they could see the complaints lodged against them, but they never heard back. With time running short, they canceled the event and posted a GoFundMe page instead.

I reached out to the school to ask for clarification.

A spokeswoman sent a statement about how the "sequence of events did not go according to our normal process for working with student organizations." She said the administration should not have prohibited the fundraiser and that it usually focuses on "coaching" students about how to proceed when an event "could have a negative impact and unintended consequences on campus." But I never got an answer to what was so objectionable about the event title in the first place.

Neither did the students. In a meeting Thursday, another administrator apologized to Cimino for not following protocol and pledged to help promote a future event for the veterans' group. Still no explanation, though, of the "cultural appropriation" accusations beyond something like "we thought it could be controversial."

Schools were once charged with educating, challenging and setting an example for their wards. Today's pupils must settle for controversy-prevention empowerment instead.

Catherine Rampell is an opinion columnist at The Washington Post. She frequently covers economics, public policy, politics and culture, with a special emphasis on data-driven journalism. Before joining The Post, Catherine wrote about economics and theater for The New York Times.