The short, intense Alaska life and love of Sam Weis 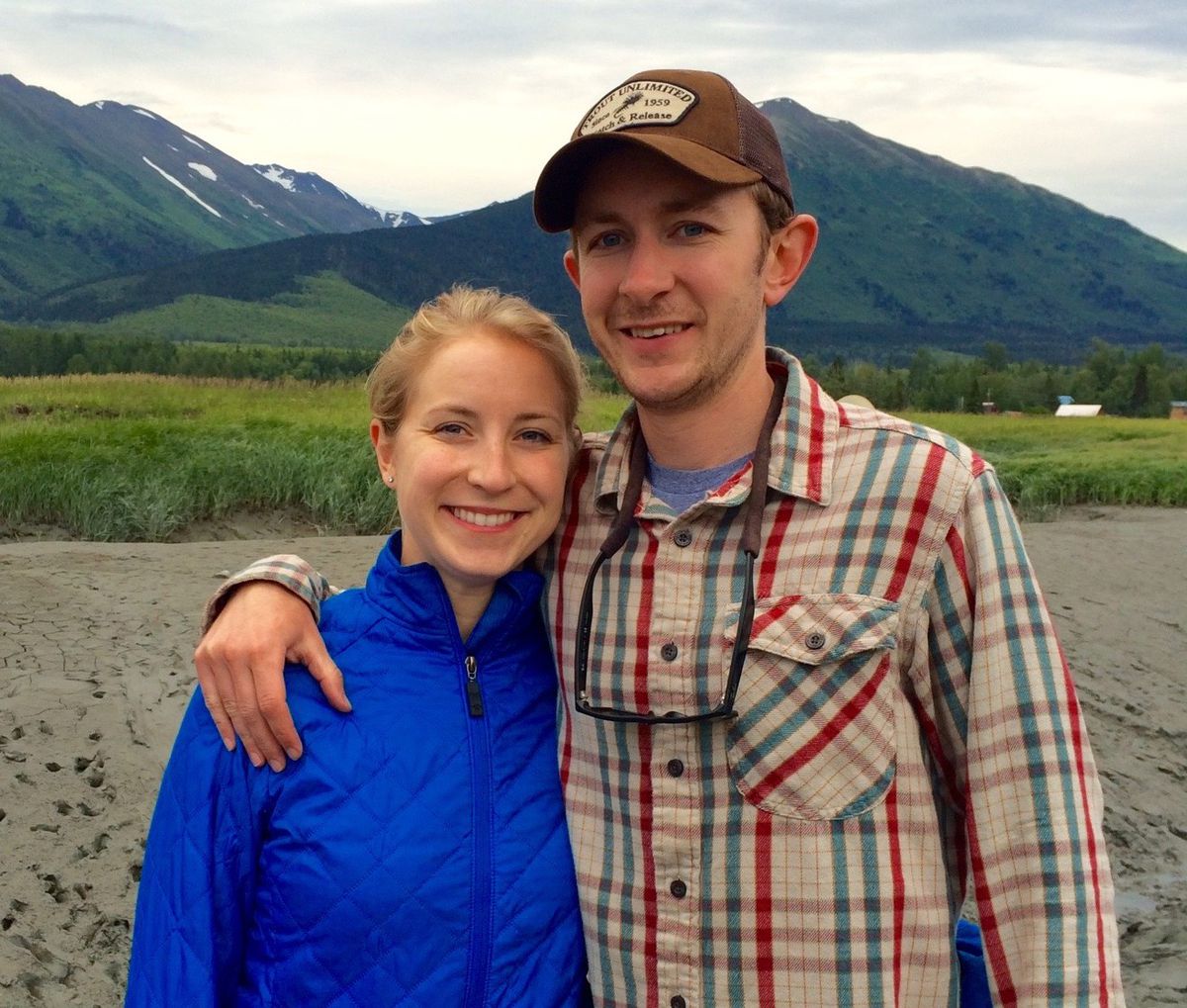 At 24, Sam Weis wasn't sure he should allow himself to fall in love.

After two years with leukemia, he was bald from chemotherapy, his face puffy with steroids. An intern fresh out of college had come to work for him at an environmental organization in Madison, Wisconsin.

It might not be fair to tell her how he felt. But he had learned from cancer that he had to live.

"Cancer gave me the courage to tell the girl of my dreams that I kind of liked her," he related at an Arctic Entries storytelling event in 2014.

Weis died May 9, at 31, after an enviable life. I felt that last week as I learned his story from his widow, Jenny Weis, 29, at their home in Anchorage.

"He and I had no regrets," she said. "We really lived. We fell in love super-fast and super-hard, and we lived like we were on a massive adventure for seven years."

Back in 2010, at the dawn of their relationship, he taught her the vigorous activities he loved: biking, skiing, backpacking and fly-fishing. Her fitness grew along with his, as she got in shape and he recovered from his treatment.

With cancer in remission — for good, she assumed — they moved to Alaska in 2013. Working for environmental organizations, they told their families back home they were leaving for only two years — that old story.

They volunteered, skied, fished, hiked and worked. Both were professional communicators at organizations dedicated to protecting rivers.

Sam wrote with awe of fly-fishing for Alaska's giant trout, imagining their thousands of generations in the rivers' endless flow. His work focused on stopping a proposed coal mine on the Chuitna River. The mine would wipe out 14 miles of stream.

In May 2015, Jenny proposed. In June, the leukemia came back — worse. In August, they were married.

The couple left Alaska for a bone marrow transplant and a long, tough course of treatment. In the spring, a year ago, they drove back.

Sam built an ingenious plywood camper top on their pickup, hitched his drift boat behind it, and they devoured Alaska as fast as they could. Sam caught a king salmon on a fly rod for the first time.

"Even when he relapsed in October, it was terrifying and awful, but we had just had the most awesome Alaska summer," Jenny said. "In a way it felt totally new, because we had just done so much together."

Anyone who has had cancer in the family knows the ups and downs, the hopes and setbacks. Sam and Jenny documented it on a blog, holding nothing back. They are vivid writers. Readers came from far beyond their group of friends.

The blog is called "Carpe the Effin Diem."

But youthful energy and hope couldn't stop the overall trend. On Jenny's birthday in March, doctors in Seattle said Sam was terminal. Treatment could delay the end only briefly.

On April 5, in Madison, Sam wrote his last, joyous blog post when he learned of the cancellation of the Chuitna Mine — the main work of his short life. He asked for some of his ashes to go there.

He wrote of feeling lucky.

"I cried thinking about how, at least for now, the Chuitna and places like it will provide people like me the chance to revert to childhood," he wrote. "It is a spiritual place where I never failed to find peace. It is a place I will die happy knowing I did something, however small, to protect."

Sam and Jenny returned to Anchorage in mid-April, hoping to recover Alaska's energy during his final days. But he was too weak.

The first time they tried skiing at Glen Alps, Sam fell on ice 50 yards from the parking lot and broke his pelvis. For the rest of his days he fought the pain and the grogginess of pain medication.

But he refused hospice care until just before his death.

"You've handled this vicious disease that you've fought gracefully and aggressively and courageously," she said. "Telling him that, and saying no one thinks you're giving up, it was like kind of permission for him to relax."

He died in his own bed at home, with Jenny and his parents by his side. The blog shows Jenny's hands clasped to his.

"That was after he died," she said. "We were just sitting in the bedroom and just waiting for the funeral home people to come. His Mom took that of me holding his hands. I couldn't let go of his hands. Just trying to hold onto him while he still had heat in his body and his skin felt like his skin."

Sam's service, May 22 in Madison, was based on the Arctic Entries performances he helped produce — friends told stories. The event was live-streamed on Facebook.

And now Jenny has to figure out what to do next. She has read up on it. There's a forum on the social media site Reddit for widows where she got some good advice.

But she said, "I don't think I'm prepared. I don't know anything. I've been with him my whole adult life."

His life contains a lesson. It was short, like an Alaska summer, but in the summer the days are long. In the glow at midnight on the bank of a stream, if you are awake for it, the energy can course through you.

Jenny said, "I know he would want me to be happy and stay active and do lots of adventures."