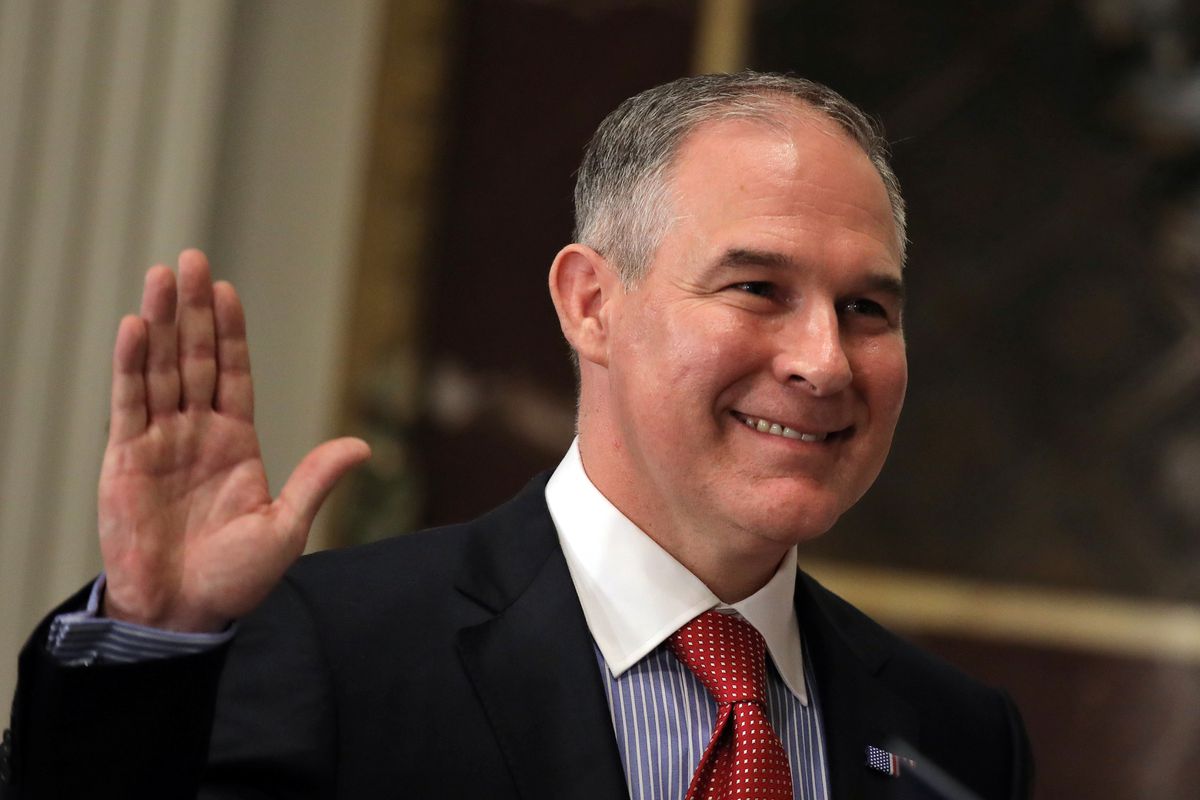 The Senate confirmed Scott Pruitt to run the Environmental Protection Agency over the objections of Democrats and environmentalists worried he will gut the agency. (REUTERS/Carlos Barria)

The Senate confirmed Scott Pruitt to run the Environmental Protection Agency over the objections of Democrats and environmentalists worried he will gut the agency. (REUTERS/Carlos Barria)

Once Scott Pruitt was appointed as EPA administrator it was only a matter of time when the agency's lawsuit against the Pebble prospect would get dropped. So when the announcement came two weeks ago that the Trump EPA had settled with Northern Dynasty, I wasn't too surprised. Deeply dismayed, yes. How disappointing that the voice of science is silenced; how profoundly sad that this action in turn muffles the voice of Alaskan Natives, commercial fishermen and local environmentalist and business owners.

To understand the Alaska voice that is being muffled it's important to recollect that in 2014 the EPA invoked a rarely used clause of the Clean Water Act, 404(c), to review the proposed mine's impact on salmon streams. They did this extra scientific review at the bequest of residents of Bristol Bay and it had dozens of public hearings.  Alannah Hurley, executive director of the United Tribes of Bristol Bay, said in an interview with the Alaska Dispatch News, "If there's damage to the watershed and the fisheries, then it would be devastating to our identity as indigenous people.

"For the company to paint it as federal intervention is completely misleading," she continued. "The people of Bristol Bay basically cried out to EPA to help us."

[House committee urges EPA to drop opposition to Pebble mine]

Oh, but not too worry. EPA Administrator Scott Pruitt said early Friday that "the agency is committed to allowing the (permitting) process to move forward, but isn't prejudging the outcome." And what outcome might that be after dismissing half the scientists on a board that advises the EPA on the integrity of their science? The Trump version of EPA won't prejudge; they'll just significantly lower the bar.

Los Angeles Times reporter David Horsey notes in an article, "Scott Pruitt undermines the EPA with anti-science ignorance," that Pruitt is intent on a complete neutering of the agency.

Horsey notes, "It came to light this week that the new director is now demanding that all but the most insignificant enforcement measures taken anywhere in the country get a review in Washington, presumably to determine if they are out of step with Pruitt's pro-industry cheerleading." How does this full frontal attack on the agency's operations not prejudge the outcome?

And for whom is the public trust being set aside for? Northern Dynasty, a company that a hedge fund manager says is worthless. In April 2017, Kerrisdale Capital Management, a New York-based hedge fund with a specialty in shorting companies, released their investment analysis of Northern Dynasty.  In a well-researched New Yorker  article, writer Tim Sohn notes that the Kerrisdale report states, "the cost of meeting various logistical challenges — supplying the project's enormous power needs; building a deep-water port, a pipeline, a haul road, and dams to hold back waste—may in fact be too high for Pebble's relatively low-grade ore ever to be mined profitably." The report's conclusion is damning: "Northern Dynasty has skillfully exploited the Trump narrative to reignite enthusiasm for a company that the market had left for dead. But 'telling a good story' is all Northern Dynasty has ever been good at."

So if it comes down to storytelling, why isn't the cultural and economic legacy of Bristol Bay, the thousands of jobs created and the world's largest sockeye run enough of a good story? Could it be that the resource craps table is tilted and industry is set to run it under the Trump administration? Isn't this what presidential adviser Steve Bannon wanted when he brought on Pruitt as part of Trump's anti-government zealots? As Bannon explained at the Conservative Political Action Conference last February, "The Trump administration would seek nothing less than the deconstruction of the administrative state." Secretary of Education Betsy Devos and Energy Secretary Rick Perry are the other "deconstruction" appointees who stand in stark contrast to their respective agency mission.

With this in mind it's no wonder that Northern Dynasty expects "a speedy permitting process to come out of the Trump administration."

In a recent Alaska Dispatch News article, Northern Dynasty president Ron Thiessen and Pebble Partnership CEO Tom Collier said that they expect it to be one of the first projects to go through an expedited permitting process, which would allow them to complete the process "in record time." So not only is Northern Dynasty expecting EPA to deliver an outcome to their satisfaction but an expedited one at that. Oh yeah, but we're not pre-judging the permit process.

This should be of concern to the 65 percent of us Alaskans who voted for ballot measure 4 in 2014 to allow the Legislature to ban open-pit mines from the Bristol Bay region. In larger numbers, 80 percent of Bristol Bay residents and 85 percent of commercial fishermen oppose the mine. Isn't this a bigger story than a sketchy, international mining company cashing in on the Trump narrative? Heaven forbid if scientific information collected over the last decade is considered as it should be. Then the Pebble prospect would end up right where the scientists left it – determining that the proposed mine would "likely cause irreversible destruction of streams that support salmon and other important fish species, as well as extensive areas of wetlands, ponds and lakes."

Alaskans already marched by the thousands for science. Now unfortunately we'll have do the same for Bristol Bay and hold Sens. Lisa Murkowski and Dan Sullivan, who voted to confirm Pruitt, accountable. We must be ever diligent and then some to protect the fish, fisheries and communities of Bristol Bay, Alaska's salmon heart. The Pebble prospect does not trump salmon, even if the permitting outcome is pre-judged.

Kate Troll, author of "The Great Unconformity: Reflections on Hope in an Imperiled World," has  22 years experience in fisheries, coastal management and energy policy and has held elected office in Juneau and Ketchikan. She lives in Douglas.