Standing room only: 750 miles on a paddleboard to Alaska 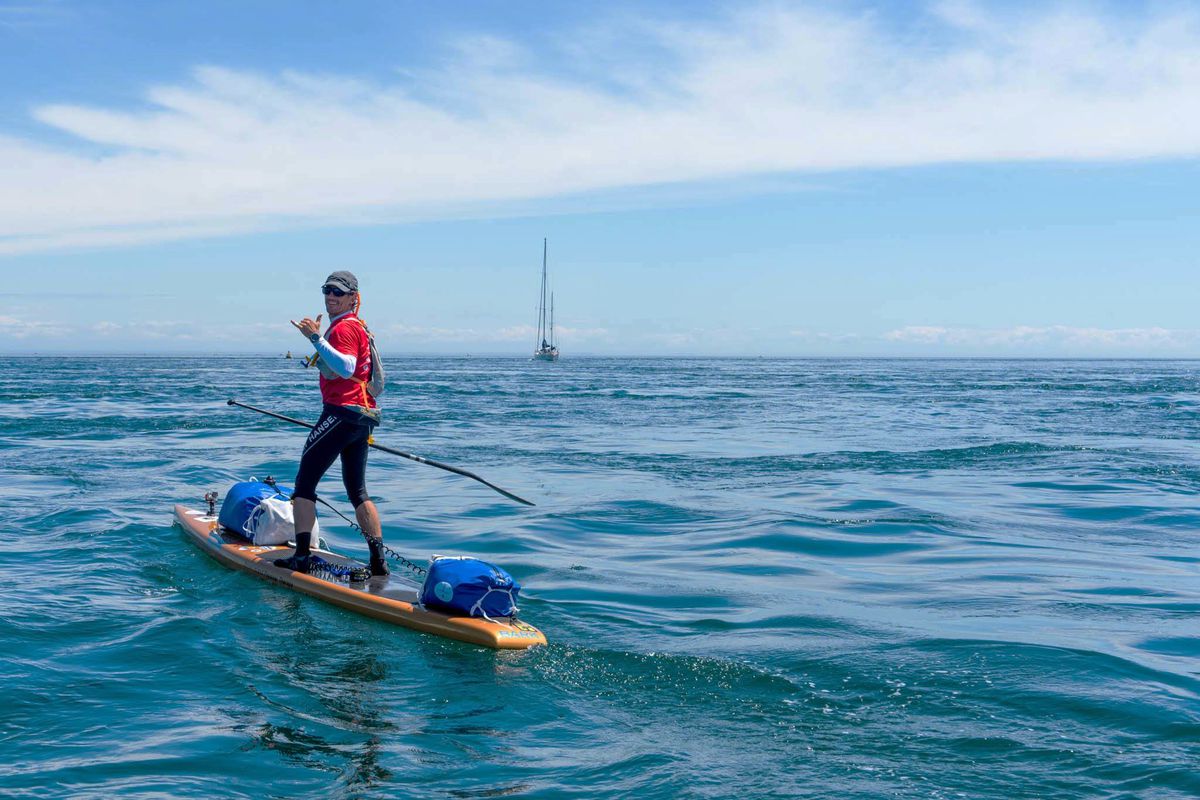 Karl Kruger greets photographers on the media boat during his two-week cruise from Port Townsend, Wash., to Ketchikan in the Race to Alaska. (Photo by Katrina Zöe Norbom)

Karl Kruger greets photographers on the media boat during his two-week cruise from Port Townsend, Wash., to Ketchikan in the Race to Alaska. (Photo by Katrina Zöe Norbom)

To hear Karl Kruger talk about his excruciating outdoor experiences as a child,  it's a wonder that he didn't reach adulthood with a preference for the indoors.

At 13, he struggled to keep up with his dad on a punishing bushwhacking trek in the Adirondacks that lasted more than 24 hours. The patriarch's unyielding pace left the boy so exhausted he couldn't feel his feet hitting the ground.

His dad traded hoots with the owls and prohibited his son from using a flashlight in the dark, telling him to rely on his other senses. In a canoe, his dad ordered that the paddle should never thump against the side of the boat, touching nothing but water.

"To say that my childhood with him was unpleasant would be a marked understatement," Kruger told an interviewer the other day on the Stand Up Paddle the World podcast. But, he added, "I owe a lot of who I am to him."

The paddling, suffering and other skills came in handy during the 14 days that Kruger spent standing on a 19-foot paddleboard, completing an unbelievable 750-mile ocean journey from Port Townsend, Washington, to Ketchikan.

It was all in the name of a good time, part of a boat race to Alaska open to any vessel without a motor. While Kruger was a good 10 days behind the winners, he traveled faster than some rowers, kayaks and sail-powered entries, a testament to his physical and mental conditioning.

In an interview on the race website, he said the toughest day was crossing Dixon Entrance, just south of Alaska, where squall after squall delivered 4-foot chop. "I took that day wave by wave," he said. "It was a full-blown brawl."

All of his outdoor experiences, starting with his dad, have taught him to expect highs and lows. "There's an acceptance of that on one level, but also this knowledge it won't last," he said.

"I didn't just jump off the couch one day and decide to do this," Kruger said while resting in Ketchikan. "There's a process to this. I've been running scenarios in my brain for a couple of years about that problems list and mitigating all the risks."

Kruger, 45, runs a sailing charter business based in the San Juan Islands with his wife. He knows the complex coast environment well and adjusted his schedule according to weather, tides and currents. "I was scrambling to hit a weather window all the way up," he said.

He saw whales every day and accompanied sea otters, birds and other wildlife while dealing with rough water as well as periods when the ocean was smooth as glass.

Darrell Kirk of the Stand Up Paddle the World podcast said the trip was "one of the greatest feats we've seen in stand-up paddleboarding."

The Race to Alaska, known as R2AK, has simple rules and entrance requirements. "R2AK is a self-supported race with no supply drops and no safety net. Any boat without an engine can enter," the R2AK website says.

"In the anything-goes world of the R2AK, teams make compromises all the time, trading off speed for survivability, sacrificing human or wind power to optimize the other," race organizers said.

Kruger's entry "shatters that outdated thinking by sacrificing everything to optimize difficulty."

Photographer Katrina Zöe Norbom said that whenever the media boat got close to Kruger during his 14- to 16-hour days on the water, he gave no hint that what he was doing was difficult. "Every time we rolled up out of the blue on Karl, he had a big smile on his face and he just kept paddling," she wrote on Facebook.

Kruger said a paddleboard is more versatile than a kayak, an excellent craft to move a person with limited gear in a wide range of sea conditions. Kruger also entered the 2016 race on a paddleboard, but had to drop out after 100 miles because it cracked. This year he returned with a custom board made by Joe Bark that he said was perfect for the task.

Paddling is a meditative experience in which each breath is linked to each stroke. He thinks he has more than 100 different paddle strokes and compared the process to the Chinese practice of Qigong.

From outward appearances the practitioner of the Chinese exercise is motionless, masking subtle movements to change the way your body deals with the stresses placed upon it, he said.

As he made his way along the coast, he said he often thought about the paddlers who traveled the same waters before him for thousands of years.

Because there is nothing but surface storage on a paddleboard, part of his prerace planning was a math exercise, removing every excess ounce from his gear and food. He ended up with 45 pounds, about half of that food.

One of the biggest challenges was getting enough to eat — minimizing the hours spent in camp and weight on the boat, while maximizing rest and the hours on the water. He couldn't afford the weight or bulk of freeze-dried foods or extra fuel.

He told Kirk his solution was in science, relying mostly on wafers, gels and other items from Hammer Nutrition for athletes. He would pop three or four wafers an hour, each about twice as thick as a bottle cap, all day long. He also ate gels and mixed nutrient shakes at night.

"It's not a culinary treat," he said, but it was the most effective way to get his daily dose of calories.

While luck helped him get to Ketchikan, he said he had no trouble ignoring those who said this was a crazy idea.

He said he knew he could do it because of  his time on the water, his knowledge of the coast and the wide range of  hardships he'd overcome in the past.