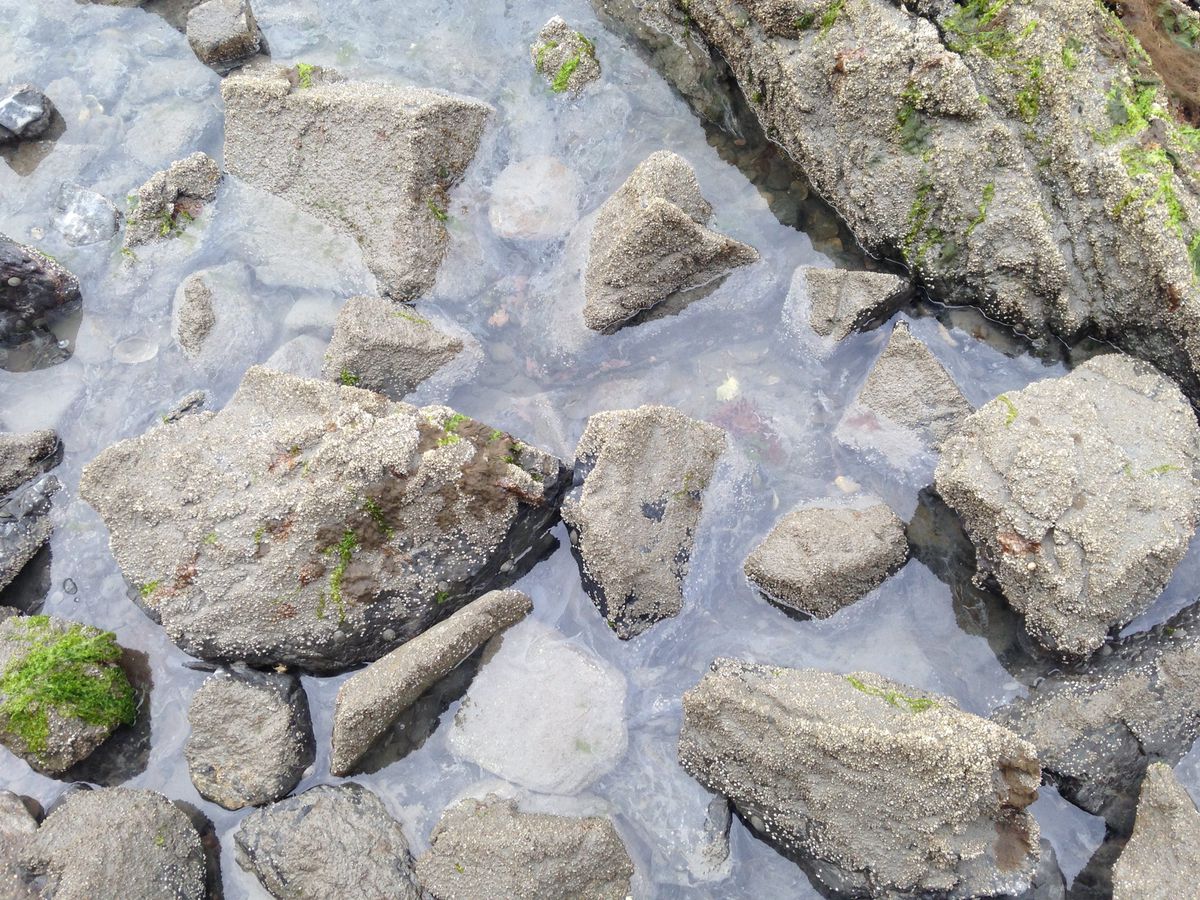 A tide pool on the south side of Kachemak Bay, near Bear Cove, on Sunday (Charles Wohlforth / Alaska Dispatch News)

A tide pool on the south side of Kachemak Bay, near Bear Cove, on Sunday (Charles Wohlforth / Alaska Dispatch News)

BEAR COVE — Never before this summer have I found as few creatures in the tide pools of the Kachemak Bay beaches that I've walked much of my life.

There are no sea stars. That's astounding and weird. Normally, various species of many colors and sizes are everywhere at low tide.

Mussels that formed blue mats along a certain level of the intertidal rock and gravel are missing. Spots where they attached by their byssal threads in multiple layers now have just a few tiny individuals. Most of those rocks are instead bare or clothed in barnacles.

On our beach, I formerly could set out in the late afternoon to pick mussels for that evening's dinner, work of a few minutes. We will not be eating mussels again for a long time.

At lower tides, we would sift the mud and rocks for steamer clams. Every hole would yield some. If our group was large, I'd watch to make sure we avoided getting too many.

We don't have enough clams to bother digging anymore.

Folks all over the bay have seen the same thing. Scientists who count intertidal creatures in statistically randomized plots verify it. Divers say the sea stars are absent lower down too.

The sea is always changing. When you arrive here as a young person, you think the abundance you find on the beach is normal, but in a few years you realize that life spreads up and down the rocks like arriving waves, in a rhythm that lasts years.

But if this scarcity of life is the low trough of a wave, it's lower than anyone has seen before. As we talk about the paucity of so many living things — intertidal creatures, crab, birds, some fish — even the oldest people can't remember the bay as poor as it is now.

Maybe this is new. No two waves are identical. The circle of the seasons never returns to the same spot.

As this ecosystem rides the arrow of time like the rest of us, each moment arrives new and only once. For that reason, what we do always matters.

Did we do this?

The Gulf of Alaska is recovering from a three-year period of abnormally warm temperatures. Oceanographer Kris Holderied said the warm water, which scientists called "the blob," developed during warm winters. Over one winter, July water temperatures lasted all year in Kachemak Bay.

These were the three low-snow winters across Southcentral Alaska.

"If you're a skier, you know that sucked," Holderied said.

She's a skier and, for the National Oceanic and Atmospheric Administration, director of the Kasitsna Bay Lab, on the south side of Kachemak Bay.

A massive die-off of seabirds, especially murres, came with the warm water period. They starved.

A glassy-eyed seabird showed up on my beach one afternoon in the fall of 2015, stood immobile and died overnight. Birds that never leave the sea were found far inland, presumably seeking food.

I asked if this could be a preview of climate change. Will we someday see these warm, killing temperatures all the time?

But scientist Mandy Lindeberg said I might be thinking of this the wrong way. She's a fisheries research biologist with NOAA's Auke Bay Lab, near Juneau.

She said the marine ecosystem isn't inching up a slow warming trend. It doesn't work that way.

"You hope that this is an event and after it is over things will go back to normal, but maybe this is an event that occurs more frequently," she said. "Fits and starts and things getting all complicated and not stabilizing. So it becomes even more variable, even more difficult for scientists to sort out."

Sea star wasting disease, which rapidly wiped them out here and along the West Coast, will run its course, if the pattern down south repeats here. Sea stars will come back in a few years.

Warmer waters probably advanced that plague, as well as the increasing frequency of toxic algal blooms, which make shellfish deadly poison. When cooler waters return, the blooms may recede, but perhaps not for as long, as the blooms themselves may have changed conditions for their return.

Not all the changes can be blamed on water temperature. An exploding population of sea otters ate enormous numbers of the disappeared shellfish, including crab, clams and sea urchins.

Are there too many otters? No one knows.

Before the Russians arrived in the 1700s, Alaska's shores were thick with otters. Russians and Americans hunted them nearly to extinction. Otters were protected in 1911, but still by 1968 hardly anyone had ever seen one.

In 50 years, otters have roared back. Maybe their numbers overshot and they will die back to a level that leaves some clams and crabs for people to catch. Or maybe our entire memory of catching of crabs and clams comes from times when otters were unnaturally scarce.

Or maybe the story is more complex. The bay's crabs declined before the otters returned, probably due to overfishing. Clams declined even where otters did not increase.

Holderied pointed out that the Kasitsna Bay Lab was built in 1959 because of concerns among local fishermen about a scarcity of crab.

Today the lab is co-managed by NOAA and the University of Alaska Fairbanks, with a primary job of figuring out what is happening in the bay these strange days.

As I walk a decimated beach, the missing lives of sea creatures create a feeling of endings. At my age, I suppose I'm thinking of my absent grown children too.

But it's best to brush away wistful thoughts and avoid getting lost in the confusing picture of the sea drawn by science.

We're living through times set in motion by our own kind, on the Earth and in this place. We are making the ecosystem of the future.

We can't really know what community of life will inhabit these beaches in a generation, but I would like for a young person who arrives then to be astonished by abundance. I'm willing to work for that.