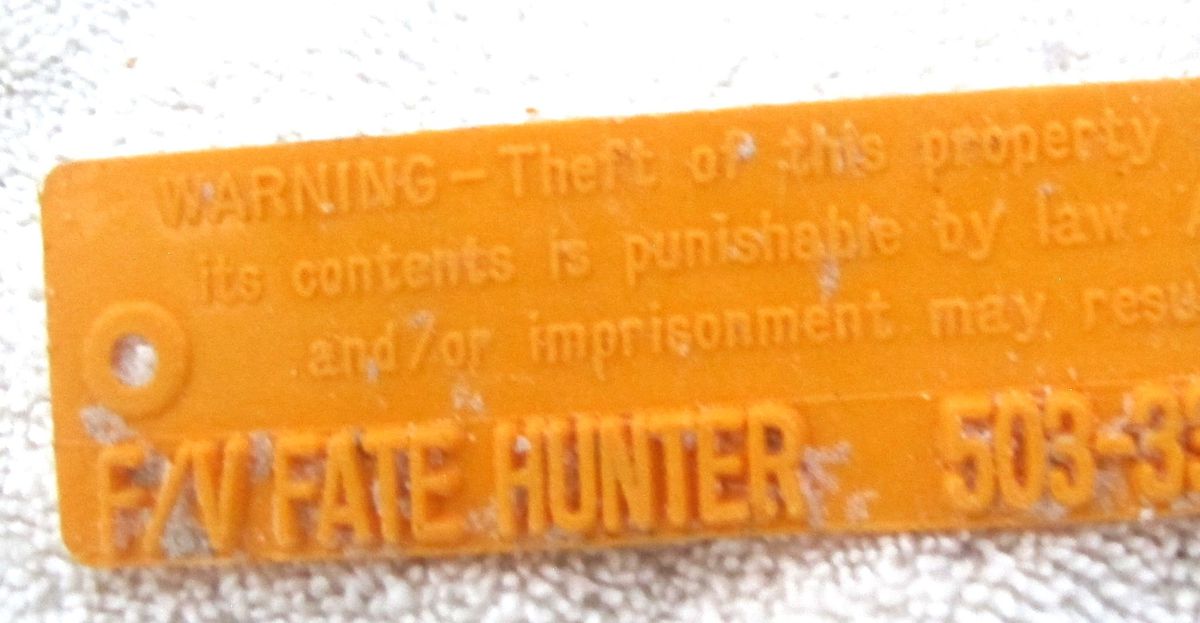 This fishing gear tag, found on a beach in Hawaii in January, had floated from a shipwreck in Alaska’s Prince William Sound more than three years earlier. (Courtesy Andy Baker)

This fishing gear tag, found on a beach in Hawaii in January, had floated from a shipwreck in Alaska’s Prince William Sound more than three years earlier. (Courtesy Andy Baker)

A chain of ocean currents that connects Alaska's Prince William Sound to a beach on Hawaii's Big Island delivered a piece of a 3-year-old shipwreck to a grieving family.

The improbable voyage of a plastic fishing gear identification tag also had human help in the person of Alaska engineer Andy Baker, whose curiosity and diligence completed the connection.

"It really is a very difficult thing to do," oceanographer Curt Ebbesmeyer said. "It takes a lot of luck, a lot of effort and a lot of time. One thing out of a thousand is traceable. That tag you are writing about is a remarkable bit of serendipity."

In this case, the luck connected a father to his daughter after his death.

"It's almost like the father had his hand on this Ouija board," Ebbesmeyer said. "I'm not a particularly religious person, but I do think there's more to it than ocean currents."

The story begins in Seward, where Baker designed an innovative heating system for the Alaska SeaLife Center. The system pumps heat from the water of Resurrection Bay to warm the facility, greatly reducing its energy cost and environmental impact.

Baker became curious about why the bay's water temperature peaked annually in November. The warmth helped the heat-pump system, but why did the bay warm as the weather cooled?

Hoping to figure out that mystery, Baker picked up a copy of Ebbesmeyer's book, "Flotsametrics and the Floating World," in an Anchorage bookstore. He read it five times and went to meet Ebbesmeyer in Seattle.

Baker's theory, which Ebbesmeyer supports, is that the water warming Seward comes from the Philippines. A huge circular current called an ocean gyre circles the Pacific in 3.4 years, carrying with it a pulse of midsummer heat from near the equator.

If he's right, last November's warmth in Seward was generated in the tropics in 2013.

The men developed a friendship. Baker, who tends to dive into one enthusiasm after another, adopted Ebbesmeyer's enthusiasm for currents and debris.

For decades, Ebbesmeyer has studied ocean currents by tracking objects that fall in the ocean, most famously a load of bathtub toys that came off a cargo ship in the North Pacific in 1992. A huge network of beachcombers worldwide makes the work possible.

He suggested Baker go to Hawaii to meet Noni Sanford, who has walked Kamilo Beach on the southeast side of the Big Island for decades.

Once called "Plastic Beach" for its many tons of landed debris, Kamilo has a geography that makes it a natural collector of floating objects from the ocean. Baker said volunteers clean it monthly.

Newcomers are often shocked by how much mess is on the beach when they arrive, Baker said.

When he participated in January, he tried to lighten the volunteers' mood, saying of the debris: "These are all stories of people. And you are here to receive them. And what will you learn?"

He mentioned to Sanford that day that Ebbesmeyer hoped he would find something traceable. She pointed to a tag she had noticed.

It was an orange plastic placard of a kind used to identify crab pots and other fishing gear. It bore the name Fate Hunter and a phone number. Baker gave it to Ebbesmeyer, but the number was dead and he didn't come up with anything.

Last month, Baker dug in and found the Fate Hunter and its fate.

In August 2013, the 65-foot tender had crashed into the shore near Shoup Bay, in northwest Prince William Sound, while carrying 150,000 pounds of salmon. The crew of four got off safely but the vessel capsized, losing gear, cargo and fuel.

The recovery took three months. Workers macerated the fish, drained the tanks, righted the boat with a floating crane, pumped out the water and towed the vessel to Cordova.

Baker also found the obituary of the captain, Kelly Smotherman, who died in Valdez a year ago, Aug. 9, at 53. He was a member of an Oregon fishing family and left two grown daughters.

The obituary in the Daily Astorian of Astoria, Oregon, cited Smotherman's cause of death as "complications resulting from refusing to listen to his doctor, having as much fun as humanly possible, raising hell for 50 years and a heart attack."

Baker contacted Smotherman's daughter Chelsea through Facebook. She is a dental hygienist in Oregon.

"That is very heart-warming to hear that my dad's tags have made the journey down there to you in Hawaii," she wrote back. "I went to the University of Hawaii Manoa and it feels good to know he made the journey in some way or another."

Ebbesmeyer said the tag is of scientific interest too. A hard hat from the head of a Cook Inlet oil worker showed up on a beach near San Francisco in 2009. It followed the same conveyor route in about the same amount of time. So did scientific float markers.

[After 3 years at sea, hard hat about to come home]

The oil flowed out of Prince William Sound — likely on the same route as the tag — toward the southwest, passed through Shelikof Strait between Kodiak and the Alaska Peninsula, and joined the Gulf of Alaska Gyre.

That current travels to Asia, but at some point the tag was captured by the mid-Pacific gyre called the Garbage Patch (so named for the way it carries the world's refuse on an eternal carousel). It shed the tag in Hawaii.

And then the journey fell to Andy Baker.

It is his human part of the story that ultimately gives it meaning. Where others saw the dispiriting sight of a beach full of garbage, Baker saw the opportunity to connect people.

He mailed the tag to Chelsea Smotherman for the anniversary of her father's death.

"In life, there's small stuff and there's really cool stuff," Baker said. "You'll miss it if you don't recognize the cool stuff and develop it a little bit before it goes by."

That's the moral of this tale.