We will protect the human rights of ‘dreamers’ 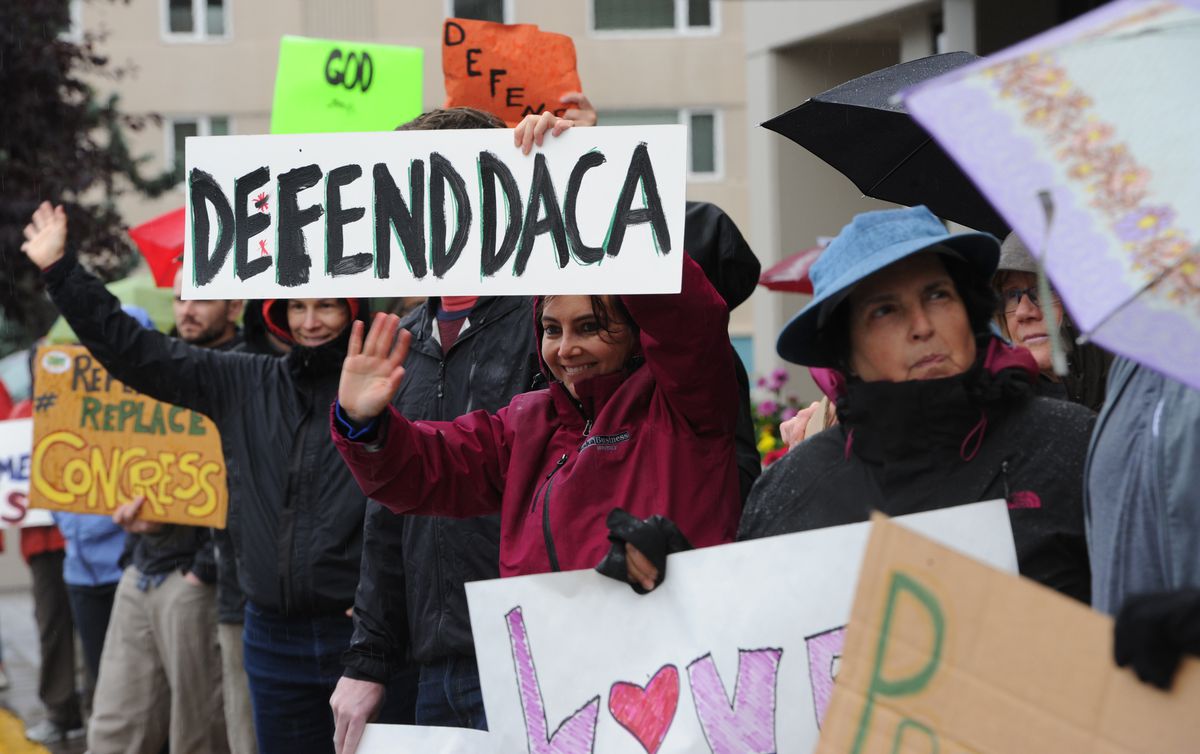 Ana Lavagnino, center, who said she is a daughter of an immigrant, shows her support for DACA (Deferred Action for Childhood Arrivals) during a rally in Anchorage on Tuesday, Sept. 5, 2017, in the wake of President Trump’s announcement to end protection for hundreds of thousands of “dreamers,” children who were brought to the U.S. and have been living here illegally. (Bill Roth / Alaska Dispatch News)

Ana Lavagnino, center, who said she is a daughter of an immigrant, shows her support for DACA (Deferred Action for Childhood Arrivals) during a rally in Anchorage on Tuesday, Sept. 5, 2017, in the wake of President Trump’s announcement to end protection for hundreds of thousands of “dreamers,” children who were brought to the U.S. and have been living here illegally. (Bill Roth / Alaska Dispatch News)

President Donald Trump's decision to rescind the program for immigrant youth is devastating for Alaskans.

I work as the executive director of the Alaska Institute for Justice. We are the only nonprofit in Alaska dedicated to protecting the human rights of all Alaskans that provides free and low-cost immigration legal services.

Since President Barack Obama created the Deferred Action for Childhood Arrivals program in 2012, our office has represented dozens of young people seeking the basic documents that allow them to come out of the shadows of our community.  DACA allowed these youth to acquire temporary permission to be in the United States.

With this immigration process they could, for the first time, get authorization to work, Social Security numbers and drivers licenses. Some are parents, grandchildren, and siblings of United States citizens.

They came to the United States from Israel, Russia, Samoa, El Salvador, Guatemala, Honduras and Mexico. They are university students, business owners, disabled, hard workers and just wanting the opportunity to pursue their future dreams. They are us.

I have worked with Alaska's immigrant and refugee communities for 23 years and have witnessed their hopes and dreams rise and plummet as Congress and U.S. presidents have played with their lives. As I write, I wonder what to say to those who support Trump's decision so that you will understand the tremendous and awful consequences of this action.

So first, let me be clear — Trump's decision affects all of us, no matter whether you were born in the U.S., or just arrived. You may not know that the young person who is your children's playmate or your neighbor, friend or coworker has received the benefit of DACA.

Immigration status is an invisible marker. In Alaska, immigrants come from all over the world and speak over 107 languages. Some are naturalized citizens, some have green cards that allow them to work and live in the U.S. indefinitely, and some have no immigration documents and can be deported at any time.

Many have U.S. citizen family members and some are DACA recipients.

For the undocumented, the ability to get immigration documents to live and work in the United States is extremely limited, even for those married to U.S. citizens.  DACA was an attempt by Obama to provide a future for these young people whose parents came to the U.S. when they were very young.

With Trump's decision these young people have once again been pushed into the shadows of our community, fearful the next knock on the door at their homes or places of employment will be an immigration officer seeking to arrest and deport them and their family members, and tear them away from the only home they may have ever known. This decision creates a hostile and dehumanizing environment for Alaskan immigrant communities.

Human traffickers and perpetrators of domestic violence and sexual assault use immigration status as a weapon, more powerful than a gun, telling their victims they will be deported if they report the crime to anyone, including friends, family members, health care workers and pastors.

Our office has provided critical legal representation and worked really hard to encourage immigrants to safely report these crimes. Obviously this protects all of us and Alaska's communities from criminal perpetrators.

In April 2017, Covenant House, Anchorage's homeless youth shelter, released a study documenting the number of youth staying at the shelter who have been victimized by human traffickers.

As defined by the Victims of Trafficking and Violence Protection Act enacted in October 2000, victims of human trafficking can be children under age 18 induced into commercial sex, adults aged 18 or over induced into commercial sex through force, fraud, or coercion or children and adults induced to perform labor or services through force, fraud, or coercion.

Victims of human trafficking are frequently lured by false promises of a lucrative job, stability, education, or a loving relationship. Victims can be men or women, adults or children, foreign nationals or U.S. citizens, and have diverse ethnic and socioeconomic backgrounds and varied levels of education.

Anchorage Mayor Ethan Berkowitz and Alaska Labor Commissioner Heidi Drygas have co-chaired a working group to stop human trafficking in our community.  I am chair of the victim services subgroup.

Our efforts have been trashed by Trump's decision, because all immigrants and refugees, no matter their immigration status, are terrified they will be deported and ripped from this community. The fear of deportation permeates every decision they make to let their presence in our community be known.

Recently, a naturalized citizen, who has been in the U.S. for 50 years, asked me whether she would be deported because her naturalization certificate, issued 40 years ago, contained an incorrect birthdate.

A friend's daughter, adopted from China and a U.S. citizen since her entry 20 years ago, worried she would also be permanently removed from this country.  Trump's hateful campaign rhetoric towards immigrants and his post-inauguration orders to bar refugees from the U.S. and increase deportations send a clear message to them – you are not welcome in the United States.

The termination of DACA is shameful. Our office will do everything possible to make sure these young people can continue to pursue their future dreams in the United States. We will continue to work together to protect the human rights of all Alaskans.

Robin Bronen is executive director of the Alaska Institute for Justice.