Gun lobby rules, no matter how many fall 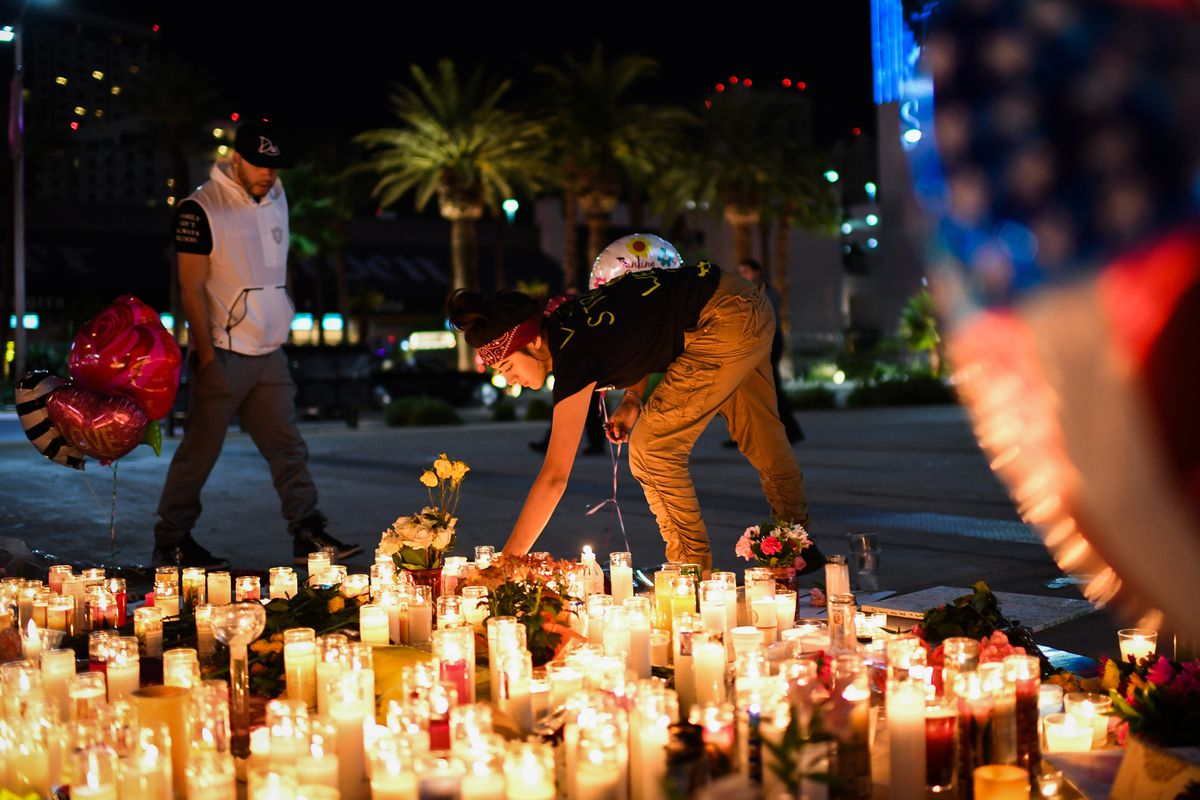 Priscilla Olivas lights a candle at a street vigil along the Las Vegas Strip on Monday. (Washington Post / Salwan Georges)

Priscilla Olivas lights a candle at a street vigil along the Las Vegas Strip on Monday. (Washington Post / Salwan Georges)

In Alaska, many of us need guns to fill our freezers, but if you need a 30-round clip I'd say you're a pretty poor hunter. If you are hoarding automatic (yes, they are legal) or semi-automatic weapons, you need Viagra.

Oh, that's right, it's about the "well-regulated militia." The Second Amendment was written by men who had fought alongside men who didn't survive their revolt against tyranny. They had the assistance of the French government. They used muskets. If you think it is your right or duty to overthrow the government at this point in time, you're going to need more than a few guns and monster clips. You'll need weapons-grade uranium, a few tanks, a submarine and an army of your own to go up against our 2-million-strong military. You very well may need the aid of another country. Good luck with that, and I think your three-cornered hat may be on a little too tight. The same founders who thought a militia was a good idea would never have expanded gun ownership to blacks. The whole slavery situation would have gotten awkward quickly.

So must the tree of liberty be refreshed from time to time with the blood of kindergarteners, mall shoppers, concert attendees and moviegoers? Is that freedom? I have had three self-proclaimed lifelong members of the NRA tell me this week that things need to change.

I'm not advocating for no guns. I like mine and am not about to give them up. But in this country, my uterus is more regulated than my guns. Birth control and reproductive health services are harder to get than bullets. What is that about? As Brian Murtagh, a 52-year-old Navy veteran put it, "I want any young men who buy a gun to be treated like young women who seek an abortion. Think about it: a mandatory 48-hours waiting period, written permission from a parent or a judge, a note from a doctor proving that he understands what he is about to do, time spent watching a video on individual and mass murders, travel of hundreds of miles to get to the nearest gun shop, and having to walk through protesters holding photos of loved ones killed by guns, protesters who call him a murderer."

It's a similar situation when the cottonwood is flying and Alaskans are all lined up for Sudafed: we have to get it from a pharmacist, give them our identification, and the state keeps track of how much we're consuming just so they're sure we're not running a meth lab. I get it, meth is bad, but I can buy bullets right off the shelf.

One hundred percent of passengers on an airplane go through screening checkpoints, but 40 percent of gun purchases are made without background checks through the loophole that allows purchase at gun shows, many of which are held in schools.

I'm old enough to remember when the NRA was invited into our schools to educate students on gun safety. Yes, I'm old, and I grew up in rural Alaska, but the NRA as an institution has changed as much as everything else has since then. It now operates as a lobby for gun manufacturers rather than as an advocate for responsible gun owners who grew up with the traditions of hunting and shooting.

The NRA and Congress have blamed escalating  gun violence on everything except access to guns — from video games, to Hollywood, to "gun-free zones." In 2010, the NRA held its convention in North Carolina in a location where guns were banned. Its cheery note to attendees told them to leave their guns at home. It seemed fine enough with a "gun-free zone" then. Charlotte Allen blamed the brutal mass murder in Newtown, Connecticut, on a lack of men and the "over-feminization" of our school system. Autism and mental health have been blamed. A godless tolerance for homosexuals has been faulted. Several people have said God wouldn't show up in public schools where he's not wanted. Apparently, he's still smarting from the lack of audible prayer, so he allowed the shooting to happen. "Let's have more guns in schools!" cried the NRA.

Armed guards have been present at many massacres and haven't been able to stop them. "The only way to stop a bad guy with a gun is a good guy with a gun," is a myth. In fact, many people were armed at the shooting in Las Vegas and knew better than to draw their weapons so they weren't mistaken for the monster.

Here's an idea. Let's start renaming the sights of massacres after the guns used. Oh, they are having a carnival at AR-15 Elementary right past the ball fields. Hey, have you seen a film at the Smith & Wesson Cinema yet? Wonder what concerts we can get tickets for at the NRA Memorial Music Park on the strip.

You think that's silly? Congress isn't going to do anything to make common-sense gun laws. They are bought and sold by the NRA. When nothing was done after all those children and teachers were murdered at Sandy Hook, why should we think anything would be different this time? The only changes this Congress seems capable of doing are symbolic.