A state guardian left this 76-year-old homeless, despite family who would care for her 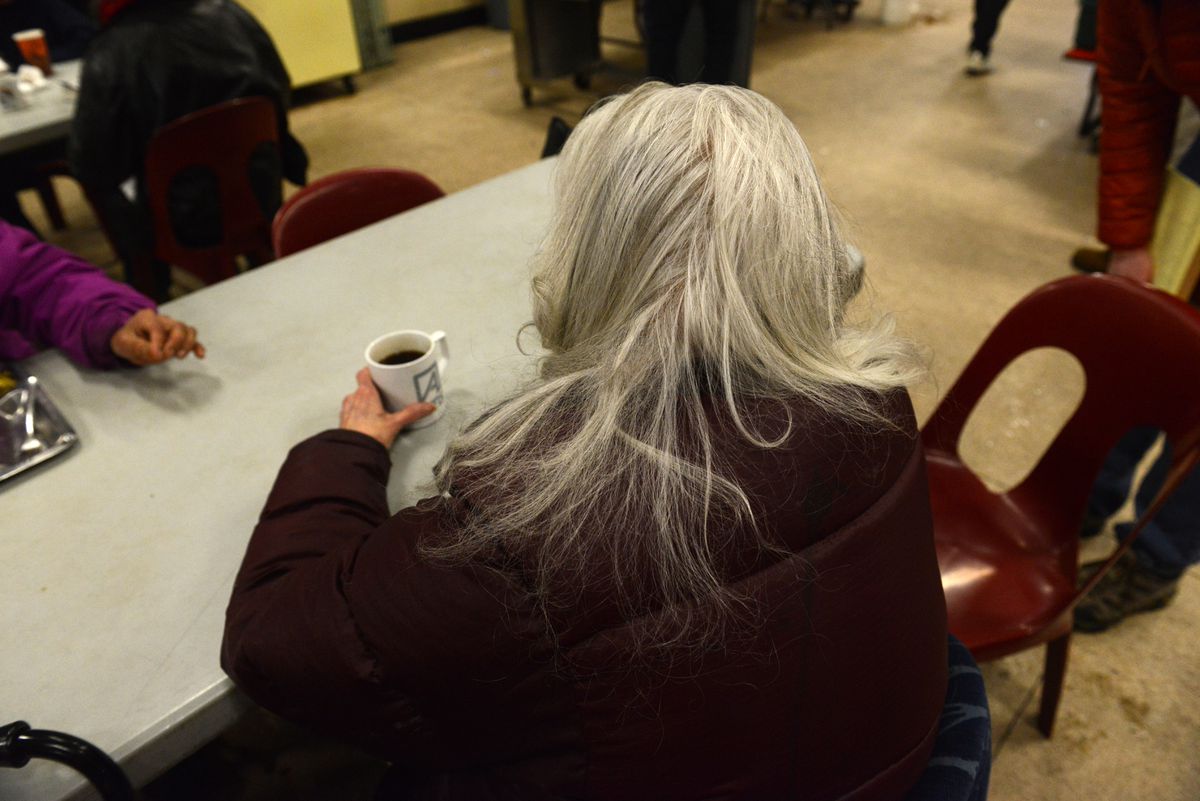 Virginia Cook, 76, who was released to the Brother Francis homeless shelter from Alaska Psychiatric Institute on Nov. 22, is pictured Friday as she sips coffee at Bean’s Cafe in Anchorage. State officials who control Cook’s money have not allowed her to travel to family. (Bob Hallinen /ADN)

Virginia Cook, 76, who was released to the Brother Francis homeless shelter from Alaska Psychiatric Institute on Nov. 22, is pictured Friday as she sips coffee at Bean’s Cafe in Anchorage. State officials who control Cook’s money have not allowed her to travel to family. (Bob Hallinen /ADN)

On the day before Thanksgiving, the Alaska Psychiatric Institute sent a medically fragile 76-year-old woman in a cab to the Brother Francis Shelter. She is still living there and on the streets of Anchorage.

Virginia Cook, who suffers from bipolar disorder, is not destitute. She said she receives Social Security death benefits and a monthly divorce payment and has a small inheritance. Two sisters and a daughter outside Alaska want to get her into a safe situation near one of them in Arizona.

But with Alaska's Office of Public Advocacy acting as her guardian and controlling her finances, Cook has not been allowed to leave. Nor has she been cared for here. She said no one from the guardian's office has met with her since she was released from the mental hospital and she has no money.

[From camp to hospital to camp, the senseless cycle of a broken mental health system]

I easily found her at Bean's Cafe on Friday. She said she is incontinent and needs dry pants. She needs blankets. She bums cigarettes. She was unable to cash a money order sent by her sister, because she didn't have her identification.

She has serious heart and kidney problems. Since she has been homeless she spent time in Providence Alaska Medical Center with pneumonia and for maintenance of her pacemaker.

An official at the agency legally responsible for Cook, the Office of Public Advocacy, said policy prohibited commenting on her case, even with her permission. But Cook's sisters, Georgia Hankins and Darlyne Gallaway, told me her story in detail, which emails from OPA staff confirmed, as did Cook herself.

API would not comment on her case specifically, but CEO Ron Hale said in an email, "The Brother Francis Shelter is an acceptable placement for discharged patients … it provides food and shelter."

With a mental illness that sometimes makes her disruptive and difficult to handle, Cook repeatedly lost placements in assisted living and returned to API. The last time, she may have been without options.

Case workers there have helped Cook and her sisters. Community partners provide a medical clinic at the shelter for the sick and old. In 10 years, the elderly population at Brother Francis increased 266 percent.

A number of the elders I saw looked like they belonged in nursing homes, but in the case of Virginia Cook, she has family prepared to fly her to Arizona and take her in.

One of Cook's sisters, Hankins, who lives in eastern Washington, said Cook came to Alaska with her husband and adult daughter about 18 years ago. Her husband died in 2004 and her daughter tried to care for her, but Cook became unmanageable due to her illness.

"It's kind of been up and down since then. It seems like if she is married or has a man in her life, she can be pretty stable," Hankins said. "If not, if she doesn't have anyone in her life, it's not too good."

Hankins said the state stepped in to handle Cook's finances in 2007.

The Office of Public Advocacy provides the service for 1,600 Alaskans at a fee that starts at $85 a month and goes up on a sliding scale. State law requires a guardian to "assure the care, comfort, and maintenance of the ward," and to assure her physical health and safety.

Hankins first heard her sister was homeless when OPA guardian Mandy Fowle called on the Wednesday before Thanksgiving. But she said Fowle hung up to take another call, saying she would call back on Monday after the holiday, then never did.

Fowles' superviser at OPA, Elizabeth Russo, said each worker there has more than 90 cases, over double the maximum called for in national standards.

With Cook in the shelter, without money or a phone, her sisters could not reach her. Hankins finally spoke to her by phone at Providence on Nov. 29. She had no cash, ID or winter boots.

On Dec. 4, Hankins received a letter from her sister that said, "I want to move to Tucson or Texas, lastly Seattle. It is very cold. Please send money. I am also contacting Mandy Fowle for my allowance. It is very, very cold."

Emails document the sisters' difficulty getting responses from Fowle. Messages and calls went unanswered or received one-line responses. They worked with shelter staff to deal with problems, but as Hankins became more frustrated, she said Fowle told the shelter not to speak to her anymore.

When the sisters tried to arrange travel for Cook to Arizona, Fowle responded in a Dec. 7 email, "I am going to request my supervisor's approval on this matter. I am not comfortable at this moment with allowing her to leave without our office being released from guardianship."

Gallaway, a retired attorney and teacher, and Hankins, who retired from a mental health clinic, knew how to manage the system of benefits and legalities. Gallaway volunteered to take over the guardianship and have Cook live in a supported situation near her in Tucson.

But OPA said the sisters would have to wait until after a court hearing before the agency would release Cook's money for a plane ticket.

"This is really extortion," Hankins said. "So it's OK for her to be in a shelter, with her health problems, and probably not taking her medication."

A hearing transferring the guardianship to Gallaway was scheduled for Dec. 28, then moved up to Dec. 21 after I began making inquiries. Assuming that goes smoothly, the sisters hope Cook's daughter from Seattle can escort her to Arizona on Christmas Day.

I am angry about this story. But Virginia Cook's situation isn't unusual.

In our wealthy society, we consider it too expensive to employ enough guardians for the mentally ill or provide them with safe shelter.

Consider taking time during the holiday season to walk through the shelter campus and see what our mental health system looks like. This is where we cast out the most vulnerable and unstable of our brothers and sisters, aunts and uncles, like scapegoats punished for being ill.

At least Cook's sisters are fighting back.