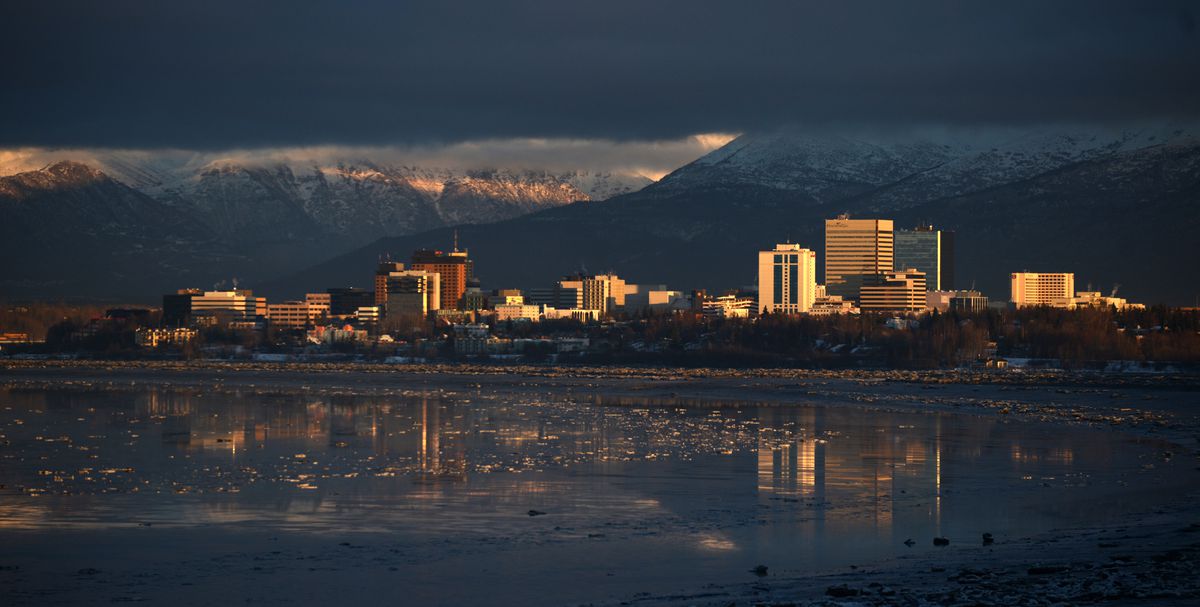 The following speech was delivered by Ron Duncan, CEO and co-founder of GCI, at the Anchorage Economic Development Corp. economic forecast luncheon on Wednesday. It's been edited for length.

There was a New York Times article this past weekend extolling the fact that every major economy on Earth is expanding at once right now.  It's a synchronous wave of growth that is creating jobs, lifting fortunes and growing business confidence, which in turn leads to more hiring, more investment and more consumer spending.

In Alaska, as you heard this morning, the only good news is that the pace of decline is moderating. But the decline is still very real. I was talking to a friend of mine yesterday who runs a highly successful retail business here and he was telling me that his business was down 20 percent in the last two years. I have other friends whose businesses are down 20 to 40 percent. At 40 percent, that's a close-to-existential threat to some businesses that have been operating in Alaska for more than 30 years. The decline that we are experiencing, even though it's moderating, has very real consequences for all of us.

In a way it's puzzling why Alaska isn't growing right now. Why aren't we sharing in the global expansion? An external view of our economic environment would suggest that we should be doing pretty well. Oil prices have more than doubled from their lows of two or three years ago. Technology has driven production costs for Alaska oil down to a level that makes production profitable even at last year's lower prices. Mining is growing too, with a new tract under exploration at Fort Knox, continued progress on Donlin and expansion at Red Dog.

The regulatory climate in Alaska is better than it has been in recent memory.  ANWR is finally on a path to development. We're seeing exploration and production increasing out of NPRA.

While not a large driver of economic growth in the state, even intractable problems like the King Cove road appear to be on the way to resolution.

The federal government is massively increasing its investment in the state of Alaska. The new F-35 wing at Eielson Air Force Base will bring almost 3,000 new residents to the Fairbanks area and more than 1,500 new jobs. There's a $2 billion expansion underway at Fort Greely to support ballistic missile defense.

Over the holiday I spent some time with our junior senator, Dan Sullivan, and he was ebullient about what our congressional delegation has accomplished in the last year. He, rightfully, believes that the recent accomplishments will have enormous positive consequences for the Alaska economy. And indeed, we owe our delegation a huge thank-you. In a year, they have removed decades of regulatory detritus that has held our economy back. Ted Stevens would be proud of what they have accomplished in the last 12 months.

Beyond our resource industries and the federal government, there are other promising signs too. The fishing industry is strong. Tourism is growing well with the world economy. Air cargo is thriving off the expansion in online commerce and global growth.

Alaska should be an attractive place to invest. We're a first-world economy, we're dollar-based, we have a good legal system and a solid yet underutilized infrastructure. Much of what's needed to grow our economy is already in place.  We have transportation systems — road, rail and air. We have a first-class health care system. We have a stat-of-the-art telecommunications network that serves admirably throughout the entire state.

All of the above are good news for the economy. Increased resource development, rapidly expanding federal investment, growing basic industries like fishing, air cargo and tourism and a solid platform to support new business should be a strong predicate for growth. So what's happening? Why do Alaskan employment numbers continue to drop? Why is our population decreasing as productive members of our workforce move out of state to find better opportunities elsewhere?

Our economy continues to languish because we've cut off the investment that we need to grow.

Economic growth is primarily a result of investment – both private and public.  Currently only one out of three investment engines is operating in Alaska — the federal government.

The federal government is ramping up and investing strongly with billions at Eielson and Fort Greely.

The state government is virtually gone. State capital spending is almost non-existent, with a capital budget that's down more than 85 percent over the last five years and is insufficient to even maintain existing state infrastructure.

Private investment, both resource-based and other, is also down very materially.  GCI has always been one of the largest investors in Alaska. We still are, but our capital spending is down 25 percent over the last two years. Our employment count is down as a result as well.

Many other businesses are in the same situation, which results in the loss of employment and shrinking GDP from the industries that used to be driving the growth in the economy.

There's an overhang on our economy that's creating uncertainty, destroying confidence, stifling investment and limiting our growth. It won't surprise you, it's been said many times today — it's the state fiscal situation.

On a net assets per capita basis we have the wealthiest state in the country. We have more than $66 billion in our savings accounts. Earnings from financial assets are now the largest single source of state revenue. Yet we have a $3 billion structural deficit that we can't seem to address.

Over the last five years we've frittered away more than $16 billion of our savings while we've been arguing about a plan to fill that gap. Last year, we almost shut down the state government and with it the fishing industry and its $1 billion  annual contribution to the state's economy, because we couldn't agree on a plan.  At the end of the day we punted and drained the savings accounts further.

The absence of a fiscal plan creates great uncertainty about our economic future. That uncertainty is reflected in the business confidence ratings that were presented earlier. While they're up, they are still at best in the neutral range and as you saw, the one on future economic prospects isn't even in the neutral range.  A recent survey asking people about their perceptions of the Alaska economy showed that 65 percent of Alaskans think the state is on the wrong track.

In the face of this uncertainty, the private sector has substantially reduced investment and consequently employment has come down, which is what has created our current recession.

It's hard to feel comfortable investing more in Alaska until we can see a path to fiscal stability. The more we drain our savings without a plan, the less private business will be willing to invest.

The long-run solution will undoubtedly include other elements – cuts, taxes or both. But those contribute a much smaller portion and are not essential now to stem the fiscal uncertainty and boost our economic growth. If we drain away all our readily accessible savings and start dipping into the Earnings Reserve without a structure or a plan, we may indeed bust the bank and face a cataclysmic shortfall in funding. The risk of that potential endpoint is what gives great pause to those of us who must make decisions for long-term investment in Alaska.

In many ways we're sacrificing stability for perfection. We lack the investment we need to grow because we can't collectively agree on how to use our public wealth. This is purely a self-inflicted problem.

The majority agree that the cornerstone of any solution must be sustainable use of Permanent Fund earnings. But that necessary first step has become the bargaining chit for those who have divergent views of the ideal result — i.e. deep budget cuts versus taxes. Each side is willing to hold our economy hostage to achieve its vision of a perfect solution and each year that there is no resolution we drain our savings further and limit our options. When that happens investment declines, more jobs are eliminated and the economy shrinks further.

When Gov. Walker first came into office he convened a series of sessions around the state with community and business leaders. At those sessions, he and Budget Director Pat Pitney presented an overview of Alaska's grim fiscal situation and went through a menu of choices that we faced. At the end of a session that I was privileged to participate in, the governor went around the room and asked people for their reactions.

The responses were eerily similar.

There were about 30 people in the room and almost every response began with, "Well I can understand the need to use a portion of Permanent Fund earnings, but before we do that we have to" and then fill in the blank. There were almost  30 different "have to's" set forth. Whether it was deep cuts to spending, substantial tax increases, more funding for the university, a better road system, more funding for public education — everybody in the room had a predicate to the one thing that was necessary to fill 80 percent of the gap.

The last person to speak was a friend of mine, a very successful Anchorage businessman and entrepreneur. He summed it all up with an analogy. He said:

"This is amazing. It's like we're in a small craft in the middle of the Gulf of Alaska surrounded by a massive storm. Our boat is taking on water at an alarming rate and we desperately need to find a safe harbor. We should all either be below the decks operating the pumps to keep the ship afloat or navigating the shortest course to safety.  Instead we're standing around on the deck arguing about what color to paint the rails and debating whether we need new windshield wipers for the wheelhouse."

Three years into the current crisis the storm hasn't really abated, our savings are nearly gone and we're no closer to a safe harbor.

I'm convinced there is a tremendously bright future for the state of Alaska, in large part because of the resource opportunities that (ConocoPhillips Alaska President) Joe Marushack just talked about. We are a resource-rich state. We have a tremendous opportunity to supply the materials that the rest of the world needs. All we have to do is learn how to govern ourselves.

If we start to fix the fiscal problem by making sustainable draws from the Earnings Reserve before we run out of savings, I believe that confidence in the private sector will come back very rapidly and you'll see a quick rebound in that missing investment. This will be followed very shortly by increased employment and a return to growth. There's no reason why we can't be growing as fast or faster than the rest of the world.

It really is up to us.