I sat down with my old political foe to talk about guns. Here’s what we agreed on. 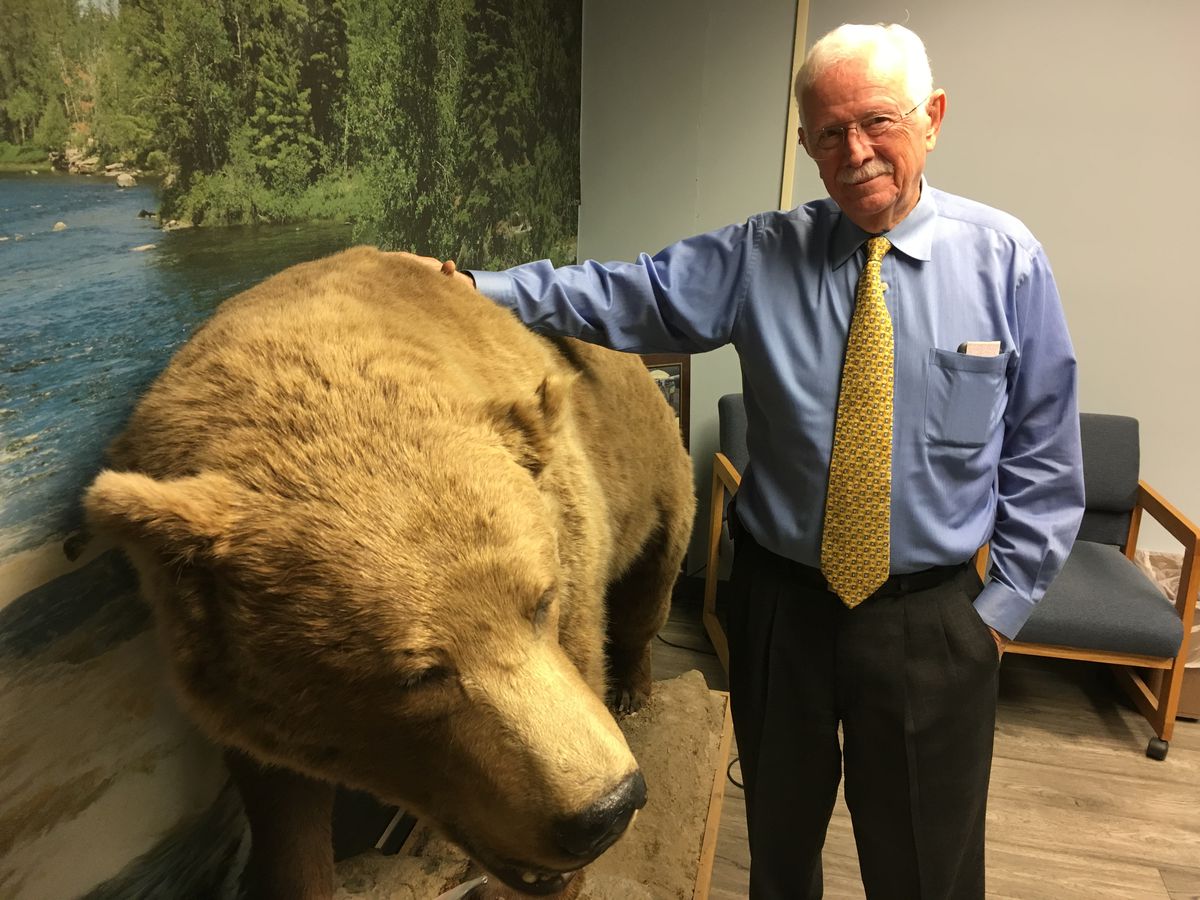 Bob Bell took this bear near Chelatna Lake in the early 1990s, a story told in his book “Oh No! We’re Gonna Die.” It stands in the conference room of his Anchorage engineering firm. (Charles Wohlforth / ADN)

Bob Bell took this bear near Chelatna Lake in the early 1990s, a story told in his book “Oh No! We’re Gonna Die.” It stands in the conference room of his Anchorage engineering firm. (Charles Wohlforth / ADN)

But we got along. And that got me wondering if we could talk our way to agreement on the problem of mass shootings.

Anyone with a heart wants to do something to protect kids from this senseless slaughter.

[I'm a lifelong 'gun guy,' but the Florida shooting has changed my mind]

So, on Thursday, I braved the herd of dead animal heads in the entry of Bell's engineering firm on Fireweed Lane to visit his office, with its vintage "I Don't Believe the Anchorage Daily News" bumper sticker.

Bell grew up hunting in arid eastern Washington where, he said, high school students were sent to Seattle so they could see their first rain, their first traffic jam and their first liberal. He also served in Vietnam, which he thinks cost him his hearing, although the only things he killed there were wild pigs.

He's been shooting everything he could since, enough to fill two books with hunting stories, with a third on its way. The first is called "Oh No! We're Gonna Die." The chapters combine bragging and self-deprecating humor — like any good campfire story.

Joking at each other's expense has gotten us through the years as friends despite our extreme disagreements. At one point a radio station put us on the air weekly as a political Punch and Judy Show, arguing politics and shooting zingers back and forth.

We turned the friendship into an asset as co-chairs of the School Bonds Yes campaign for several years. Having such opposites support the same cause brought news coverage and may have persuaded voters to fund the schools.

Recently we ran into each other at a movie about Winston Churchill and the start of World War II. Bell said I was probably rooting for Neville Chamberlain to surrender to the Nazis. I wanted to know if Bell knew Churchill personally, since he was old enough.

Bell owns 12 guns, including 10 for hunting, plus a pistol for bear protection and a pistol for self-defense. He was glad to have that self-defense gun one night a few years ago when a woman showed up at his back door covered in blood, saying a man with a gun was chasing her.

I own one gun — a shotgun primarily for bear protection.

We're within the spectrum of the majority of Alaskans, neither gun nuts nor gun abolitionists. We both own guns with purpose, not because we're obsessed with them, and we both know guns have to be regulated.

The right to bear arms is not absolute. The U.S. Constitution surely protects the ownership of hunting rifles, but that doesn't mean everyone can own a tank or a hand grenade. The question is where to draw the line.

Bell supports the National Rifle Association. He bought me a membership as a prank when we were leaving the Assembly. But he admits the NRA has taken extreme positions just to avoid going down the slippery slope toward gun control.

We both made concessions.

Bell agreed he would strengthen background checks, get rid of loopholes and raise the age to buy guns to keep them away from school-age youth.

He also agreed to stopping sales of bump stocks and 30-round clips. They belong in the category of military weapons that are already controlled.

But Bell opposes banning assault weapons, such as the AR-15 used to kill 17 people in Parkland, Florida. Legitimate semi-automatics shoot as rapidly, so any definition of "assault weapon" is arbitrary. Manufacturers easily skirted a previous ban by making cosmetic changes to guns.

I agree that I don't want to make feel-good laws that don't really accomplish anything.

Bell also made a good point that these tragedies are about mental health as much as guns.

I've heard that before and have rolled my eyes. Conservatives want to spend more on mental health only when they're afraid of gun control, but drop it after the headlines die down.

Leaving aside my cynicism, however, how can I disagree? Our mental health system is broken. Overcrowding at the Alaska Psychiatric Institute forces doctors to release patients before they should, when barely stabilized.

A little over a year ago, Esteban Santiago went to the FBI in Anchorage saying he was afraid he would hurt someone. He spent just four days at API. After his release, he flew to Fort Lauderdale, Florida, and killed five people in the airport baggage claim area.

Conservatives, if you're serious, support mental health funding for real.

And liberals, if you're serious, prepare to give up some privacy rights — just as you demand gun owners give up some gun rights.

Breaking down secrecy barriers between agencies could allow them to track disturbed people and keep them from away from guns. We have the technology. Coordination and power to step in wouldn't stop every mass shooting, but it would help.

Bell and I agreed that if you can't fly on a plane because the government thinks you might be a terrorist, you also should not be able to buy a gun.

Our last area of agreement is that Alaska doesn't need the same laws as California or New York.

Alaska is a violent place compared to the rest of the country. The murder rate in Anchorage is three times higher than New York City's. Our tolerance is higher. Despite the violence, most Alaskans don't want more gun laws.

But we shouldn't impose Alaska values on others. Why not support liberal states controlling guns to the full extent allowed by the Constitution? Federalism is supposed to allow that freedom for the states.

My conversation with Bell convinced me that most of us could agree on these issues.

Get away from your team. Talk to people on the other side — in person, not online. It's easy.