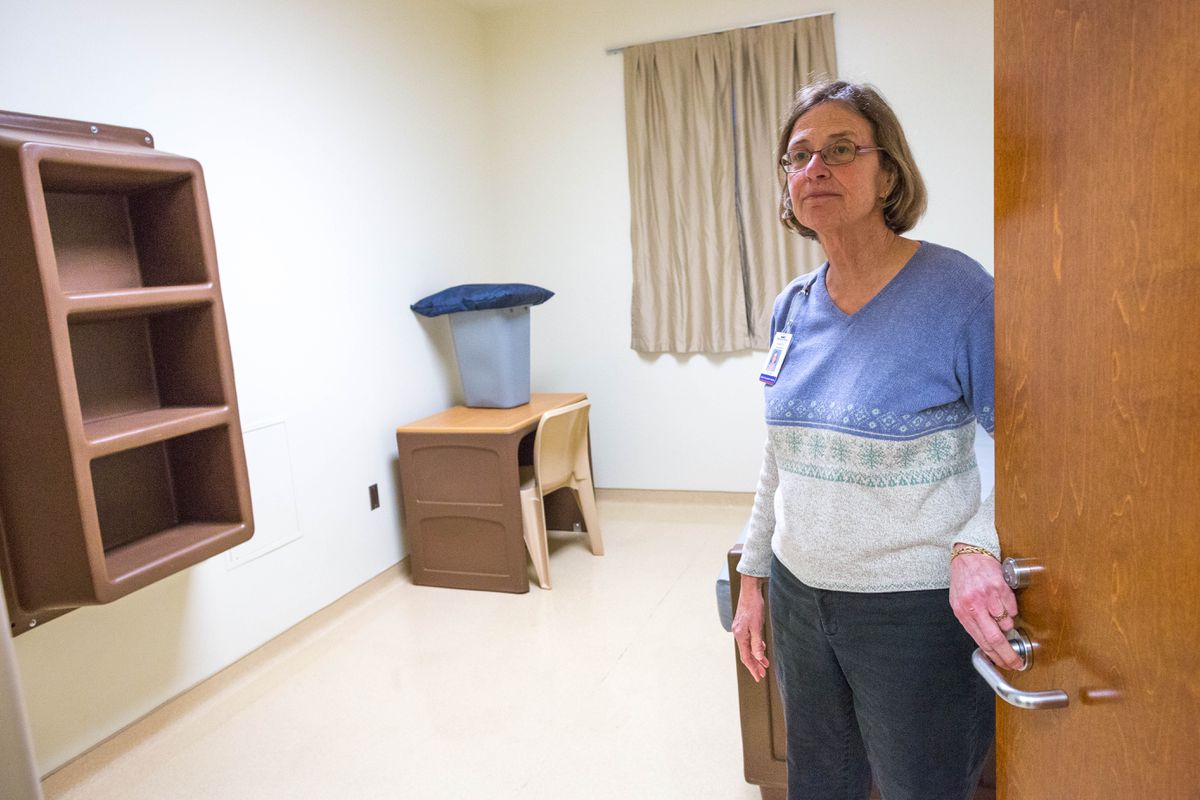 Dr. Melissa Ring, CEO of the Alaska Psychiatric Institute, in an empty bedroom at The Katmai unit on Wednesday, Jan. 6, 2016. The unit had been closed because the facility did not have enough psychiatrists to staff the entire facility. (Loren Holmes / ADN)

Dr. Melissa Ring, CEO of the Alaska Psychiatric Institute, in an empty bedroom at The Katmai unit on Wednesday, Jan. 6, 2016. The unit had been closed because the facility did not have enough psychiatrists to staff the entire facility. (Loren Holmes / ADN)

The former CEO of Alaska Psychiatric Institute resigned in 2016 partly because state officials denied the resources necessary to keep the state mental hospital safe and maintain the quality of care.

I heard from her, Dr. Melissa Ring, along with former doctors, staff and patients after my column reported last month that API had been cited for a second time for operating an unsafe workplace.

The people who contacted me painted a disturbing picture.

Patients and caregivers are afraid. Doctors and nurses said they feel safer in Alaska's prisons—which hold more mental patients—and in private hospital psychiatric units, rather than in API.

Staff members said they still have not received self-defense training included in an advanced instructional module that state officials claim was purchased even before the safety citation in November.

Patients can be released too soon, sometimes without any treatment other than medication.

Officials with the Alaska Department of Health and Social Services insist the hospital has adequate budgeted staff positions, but they admit that API is too small for its function. The department has worked for two years to restructure Alaska's mental health system in hopes of resolving the problems.

I think those changes have taken too long. Adding positions and security should happen now.

API's own consultants, like its former CEO, Ring, have said the hospital needs two dozen more regular staff positions, not just the part-time temps the state is trying to hire.

In 2014, Ring came to Alaska to lead API, with extensive executive experience at other state mental hospitals and both a PhD in psychology and a master's degree in health administration.

"I had concerns right away," she said. "Safety was a big concern. That was what staff talked to me about and first wanted to look at."

Ring said her analysis of staffing showed that API didn't have enough people to do hand-offs between shifts or cover absences. The staffing schedule left no time for training so the program for avoiding and stopping violence was never refreshed.

Ring said she chose a new training package in part to force renewal of those skills. She requested two dozen new staff positions. After the hospital was cited by the Department of Labor for safety violations in 2014, the state hired a national consultant who made the same recommendations.

"I just didn't get anywhere," Ring said. "Frankly, the executive branch refused to request it of the legislature. They refused to put it in the budget."

In the fall of 2015, the hospital fell critically short of psychiatrists. Ring closed a unit. Patients in crisis, sent to API for 72-hour periods of evaluation, were shunted on commercial airliners to hospitals in Fairbanks and Juneau.

Ring said the hospital couldn't do its job without enough psychiatrists, but until she closed the unit, she could not get state support to pay enough to attract a new doctor. Superiors pressured her to reopen the unit without a new psychiatrist, but she said doing so would have meant inadequate care.

State officials dispute that an elevated level of injuries is caused by a lack of training or short staff.

Karen Forrest, deputy commissioner of the Department of Health and Social Services, said API is too small for its function and Alaska's mental health system lacks community services and nursing facilities to support the hospital. She said the department is working on those issues.

API sometimes has been a revolving door, sending patients to homeless shelters without adequate follow-up. Ring said some patients left before they had received any therapy, only drugs.

"There were certainly times when the census pressure led us to discharge people more quickly than might have been ideal," she said.

Other states have secure nursing facilities. In Alaska, people who are difficult to manage but not mentally ill end up at API, including demented elderly patients and volatile people with developmental disabilities.

Forrest said the department has found two nursing beds for those patients and hopes to create an Alzheimer's unit for others at the Anchorage Pioneer Home.

The state continues to pursue a Medicaid waiver that would allow a restructuring of mental health services and relieve pressure on API. Forrest said negotiations with the federal government on a waiver proposal will start soon.

That's all good. But I've been hearing about similar plans for a long time. The waiver has been discussed since the Legislature passed a bill authorizing it in spring 2016.

Gov. Bill Walker's administration has been in office for three years. These problems were evident before he was elected.

In 2010, Dr. Rebecca Bay, a psychiatrist, was brutally attacked by an API patient. She said her post-traumatic stress over the attack forced her to change her career after years of working in hospitals and prisons. She now operates her own private practice in Kirkland, Washington.

Ring is working at a clinic in Hawaii. She quit API because she felt she no longer had the confidence of her superiors after the conflict over staffing and closing units. And because of the ethics of running a hospital she didn't believe was as safe and effective as it should be.

She said, "When you have people who get hurt, and you are in a position of leadership, and you can't solve the problem—and I worked hard to solve pieces of the problem, but the basic staffing problem I couldn't solve on my own—so I couldn't continue."

API has a beautiful facility and I heard from various people, including Ring and a former patient, that the staff is caring and professional and helps patients as much as they can. But they need the support of our Governor and Legislature with money for enough permanent employees.

And they need it now.

The views expressed here are the writer’s and are not necessarily endorsed by the Anchorage Daily News, which welcomes a broad range of viewpoints. To submit a piece for consideration, email commentary(at)adn.com. Send submissions shorter than 200 words to letters@adn.com or click here to submit via any web browser.