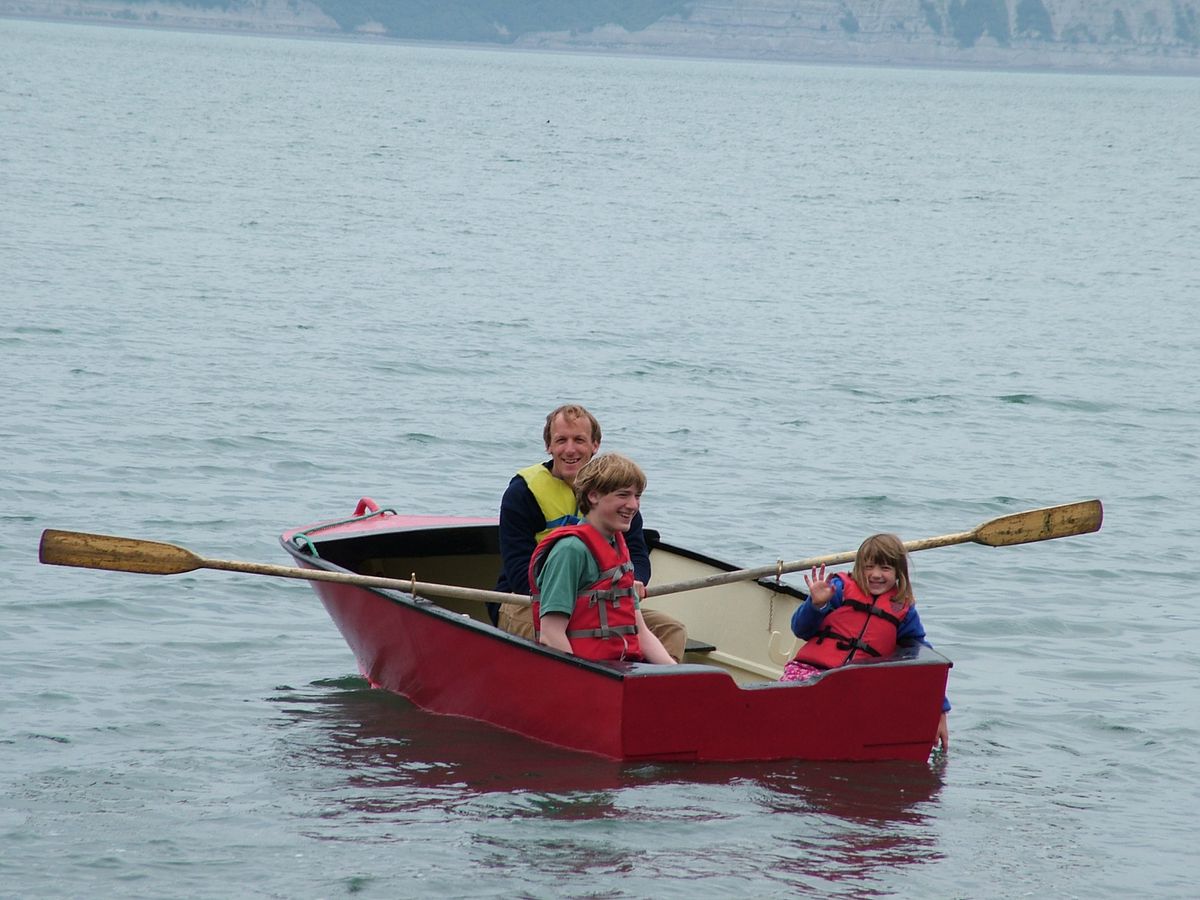 The author paddling in his rowboat in Kachemak Bay in 2006 with his son, Robin, and daughter, Becky. (Courtesy Charles Wohlforth)

The author paddling in his rowboat in Kachemak Bay in 2006 with his son, Robin, and daughter, Becky. (Courtesy Charles Wohlforth)

I'm trying to figure out why I have spent the prettiest days of spring in my garage messing with fiberglass, plywood and epoxy instead of enjoying the sunshine.

A 12-foot skiff is involved. It has occupied half the garage for the last three years, on a trio of sawhorses, mortally wounded by rot. It would have made sense to end its misery — making it a planter or whatever — and to buy a new rowboat. I could have been back rowing three years ago.

But there's more to a boat than wood and glue. This little boat has a spirit. One of Alaska's most famous boat builders, Renn Tolman, made it when he was just getting started. He was very kind to me. He died four years ago.

Or maybe it's my own spirit that I'm thinking about. I'm on the far side of middle age (I don't expect to live to 110), but I'm not ready to give up on my workout, my Rogaine or paddling on Kachemak Bay in the Sandlance.

I met Tolman in 2005. He welcomed me to his shop on the water in Homer and welcomed me into his life, although all he knew about me was that I was looking for a boat.

His old duck hunting skiff was propped up in the yard, half buried in leaves. He told me about using it with his female companion of decades, who had recently, he said, "showed me the gate."

The boat had a lot of rot.

But when I told Tolman my kids would enjoy paddling it from the beach at our cabin — they were ages 4 to 14 at the time — his eyes lit up. He sold me the boat and trailer for $500. The deal included a winter of instruction over the phone as he talked me through the laborious process of getting it seaworthy again.

Tolman was diagnosed with cancer. He thought he had a death sentence and settled his affairs. Then he survived and met a new companion.

"He went back east to die and he didn't die, so he came back," said Don Darnell, Tolman's friend of 40 years.

Darnell also is a master woodworker and seaman. He taught me a lot about building and living on the bay. Darnell once built a Tolman boat on the cardeck of the state ferry Tustumena, where he worked many years as a sailor.

[An octagonal cabin, a pipeline, a floating house: One man's contribution to a lasting Alaska]

They had met when both were young men knocking around Kachemak Bay in the 1970s, driving double-ended dories with inboard diesels that poked along at 6 knots, part of a crop of young people building new cabins and squatting in old ones left behind by another generation, 50 years earlier.

Tolman grew up in New Hampshire and got a high-class education, but left Harvard University in 1963 to wander west as a working man — mining, ranching and woodworking — before showing up in Homer to make a go of it as a carpenter.

He found his gift building boats. His specialty was practicality. He adapted new technology to make plywood boats stronger, lighter and more seaworthy.

"I guess the main feature of Renn's stuff is that he liked to make it tough," Darnell said, "And he put it to the test. He'd typically go to the Barren Islands or Augustine in the skiff. He'd go clear to Shuyak in the skiff."

Tolman put years of care and ingenuity into designs and building techniques adapted to Alaska.

"He was a curious fellow and he was always looking to improve," Darnell said. "The cool thing about Renn is that he didn't want to hang on to any secrets. He'd come up with a good idea, try it out, and then give it away. He'd write those boat-building books."

Tolman's books, written in his own crusty voice, explain every detail of how to build one of his boats. They have spread his innovative designs and graceful hulls all over Alaska and Outside, even to Europe. Owning a Tolman skiff is a point of pride.

When I went online to look for photos of him, Google served up hardly any. But it gave me dozens and dozens of pictures of his skiffs.

Tolman told me my boat was the first plywood skiff he built using the techniques he would later perfect with his own designs (although I don't know if that was true or if I am even remembering the conversation correctly).

It isn't a great boat. It takes a lot of skill to row it straight. Under power at high speed it takes water over the transom. And it has been repaired so many times that digging out the rotted wood is like an archaeological excavation.

But now I've seen my kids grow up in this boat. As I work, I'm only half thinking of rowing again. The other half, I'm carrying a burden from the past.

"You don't want to worship anything too much," Darnell warned me.

Our conversation turned to thoughts of aging and how to do it well. He told me aspects of Tolman's life that I didn't know much about.

All the equipment in Tolman's shop was on wheels so he could roll it back for country dances. He expertly played the pennywhistle. His family had helped revive contra dancing 70 years ago.

"In that respect he was quite sociable. But in other respects, he was quite crotchety. But we tend to get that way later in our lives," Darnell said. "You either age with grace and go with the flow and accept yourself as you are, or you get crystallized in codgerism."

I will be thinking of that as I fuss for hours with reeking chemicals and the scream of a belt sander, a respirator crushing my glasses into my face.

This is the last time. Next time, if they care to take it on, my kids can fix the boat.