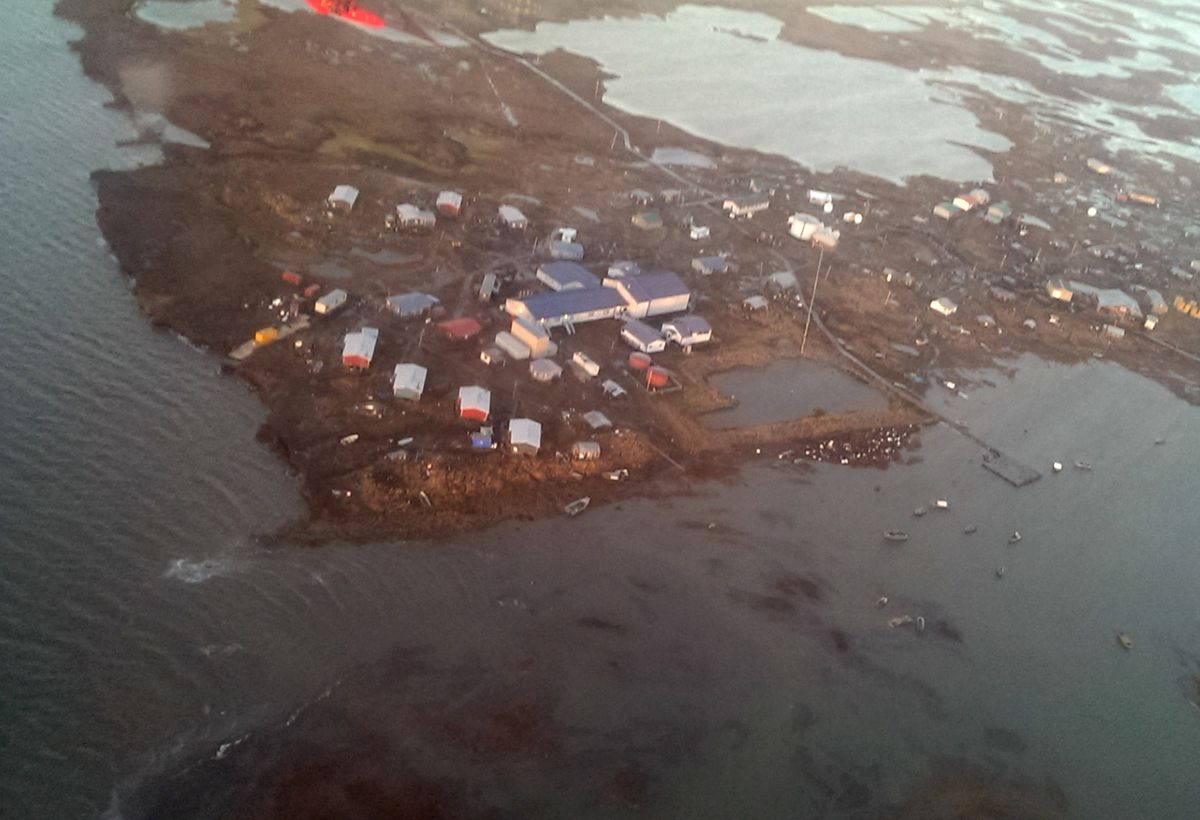 An aerial image of Newtok in October 2016 shows how close water has come to the buildings of the village. Even more land has been lost since then to the Ninglick River. (Photo by Romy Cadiente)

An aerial image of Newtok in October 2016 shows how close water has come to the buildings of the village. Even more land has been lost since then to the Ninglick River. (Photo by Romy Cadiente)

Young Alaskans have been asking for climate action for decades; now, we are asking courts to intervene.

Today and throughout our nation's history, young people have been at the forefront of the movements that have pushed our society forward. On issues such as gun violence and education funding, the voices of youth continue to be crucial to help us all see when enough is enough and it's time to change. That is also true for bold action on climate change.

Halting the climate change we're already beginning to see locally in our communities is one of the greatest challenges that our world has ever faced –– and young people have major stakes in the outcome. The impacts to our health and security are many: melting permafrost, worsening wildfires, coastal erosion and the loss of sea ice all affect us in Alaska. At the international scale, global warming causes famines, superstorms and water shortages that can fuel warfare
and terrorism. Younger generations will feel all of these changes much more severely than those in today's political establishment. On climate change, youth have demonstrated leadership because they must.

Today, April 30, oral arguments will be heard regarding the case brought by the Our Children's Trust youth plaintiffs against the State of Alaska. These leaders from across the state will be in court because they believe that the status quo is not enough.

We are writing as young Alaskans representing hundreds of others throughout our communities who have brought attention to the critical issue of climate change for the past two decades to express our full support for the youth plaintiffs' lawsuit. The world is running out of time to act on climate change and our state government must be held accountable, especially when
the federal government refuses to address the issue and routinely denies science.

Climate change is the most pressing issue facing our generation––we have the most to lose or gain, depending on the actions our leaders take today. It's a matter of justice for future generations.

We have each been involved with efforts to seek policy change and action on climate over the years: In 2005, we collected 5,000 signatures from teenagers in more than 150 villages and cities around the state, asking our congressional delegation to take action on climate change. We received a nod in the media, but no action from Sen. Lisa Murkowski or other leaders. As part of the program Alaska Youth for Environmental Action, we have traveled to our state
capitol each year since 2003 asking State Administrations for action on climate. We have seen no meaningful action.

Most recently, many of our peers in AYEA and other young people around the state petitioned the Walker administration to create an annual inventory of greenhouse gases, reduce atmospheric emissions according to the best climate science, and adopt a climate action plan. The Alaska Department of Environmental Conservation rejected the petition last September. Again, no action.

This apathy on the part of supposed political leaders is not acceptable. Alaska has among the highest per-capita greenhouse gas emissions of any U.S. state, and the U.S. has among the highest in the world. We have a real responsibility to do our part –– especially when the stakes for our own communities are so high. We have already seen coastal erosion begin to jeopardize entire villages. The future risks to our communities, as serious as fisheries collapses, mounting infrastructure degradation, and major wildlife disruption, are daunting.

Given the continued inaction of Alaskan political officials, we believe that the Our Children's Trust case is now necessary. Plaintiffs are asking the court to order the State of Alaska to put together a climate change action plan that includes specific and enforceable reductions in emissions necessary to stabilize the climate and protect future generations. While Gov. Bill Walker and Lt. Governor Byron Mallott have established a Climate Action Leadership Team — a step in the right direction — we believe the threat to our future warrants decisive political action as the suit demands.

Given the seriousness of the issue, we hope the courts will respond to this request. We encourage everyone to come show support for the courageous action of our peers and other youth today, April 30, at 3:30 p.m. in front of the Anchorage courthouse.

Verner Wilson is Yupik from Dillingham, was a member of AYEA in the
early 2000s, and part of a climate campaign that garnered 5,000 youth
signatures from more than 150 villages and cities. Tristan Glowa is from Fairbanks and organized with local and statewide AYEA efforts from 2012-2014. Kyrstyn Kelley is from Palmer and was involved in the initial petition to the Walker administration and press event last August demanding action on climate change.

Verner Wilson III was born and raised in Dillingham. As a Bristol Bay salmon fisherman his entire life, he's been inspired to be active in the region's pressing environmental issues. He graduated with a degree in Environmental Studies from Brown University in 2008. He's dedicated to helping protect his Yupik Eskimo cultural traditions, and is currently attending Yale University as a candidate for a Masters in Environmental Management degree in 2015.

Tristan Glowa is a member of the Fairbanks Climate Coalition and a student at Yale.