3 decades ago, Alaskans helped end the Cold War on ‘Friendship Flight’ to USSR 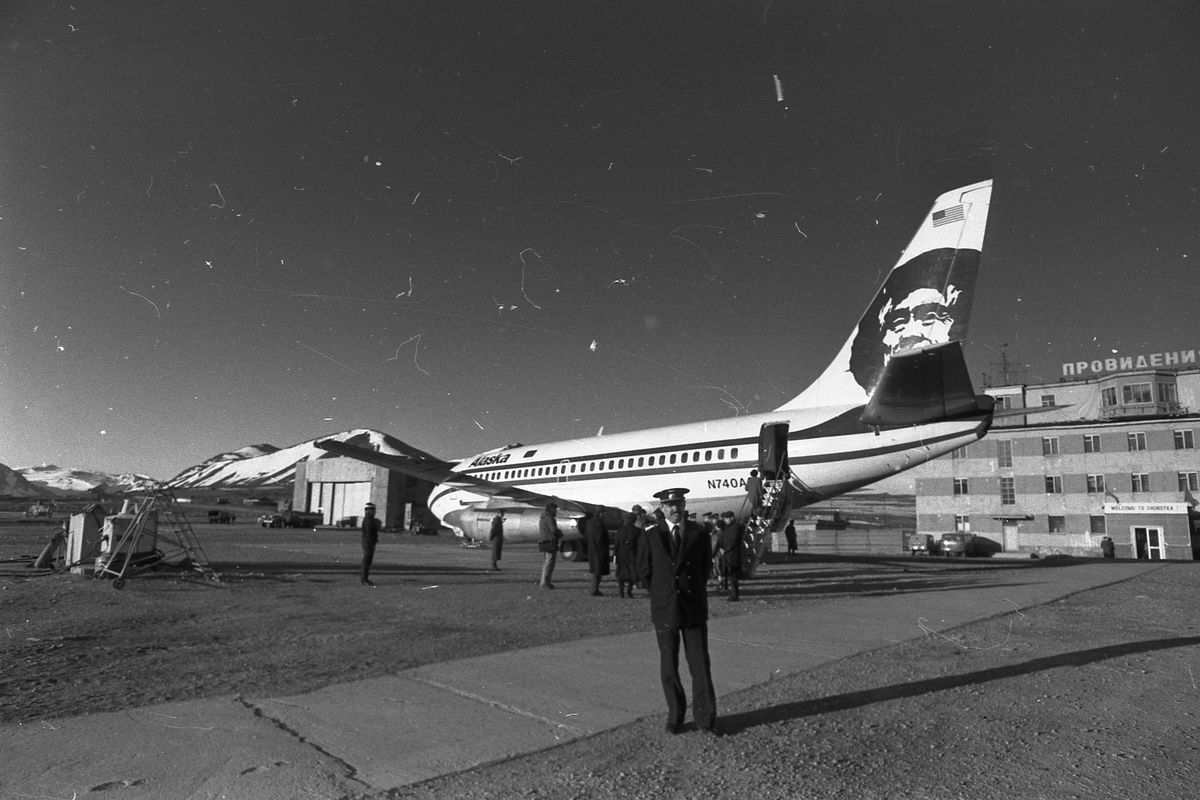 Alaska Airlines’ Friendship Flight is guarded on the airstrip in Provideniya, USSR. The flight was the first by a commercial jetliner to that Bering Sea coast community at the height of the Cold War. (Photo via Provideniya Museum)

Alaska Airlines’ Friendship Flight is guarded on the airstrip in Provideniya, USSR. The flight was the first by a commercial jetliner to that Bering Sea coast community at the height of the Cold War. (Photo via Provideniya Museum)

Thirty years ago next month, 82 intrepid travelers nervously tightened their seatbelts on an Alaska Airlines 737-200 for the first-ever flight into tomorrow to what President Ronald Reagan dubbed the "Evil Empire." The historic June 13, 1988 "Friendship Flight" between Nome and Provideniya, USSR, reunited Native families separated for 40 years by Cold War tensions and launched decades of chaotic but prolific progress in U.S.-Russia relations.

Alaskans and their Soviet counterparts across the Bering Strait made history that day. They inserted themselves into the cutting edge of international diplomacy more than a year before the Berlin Wall's fall, generally regarded as the end of the Cold War. As American-Russian relations today deteriorate to their most precarious in decades, leaders of both countries should learn from the example set by Alaskan and Russian "citizen diplomats" three decades ago.

The run-up to the Friendship Flight began in the post-World War II paranoia that gave birth to the Cold War. In 1948, FBI Director J. Edgar Hoover and Soviet leader Joseph Stalin agreed their countries' national security interests outweighed those of Bering Strait Natives. They sealed the international border between the US and Russia, prohibiting all contact and dividing Native families. That "Ice Curtain" would last 40 years.

By the mid-1980s, a drumbeat for change began in the isolated Bering Strait. Alaska Native elders pled for one last opportunity to reunite with long-separated relatives in Russia before passing from the scene. What followed were a series of risky but headline-grabbing initiatives by Alaskans and Russians to pressure their national governments to ease Cold War tensions.

As the jet branded "Friendship One" lifted off from Nome that June morning, many of us on board were apprehensive. Just five years earlier in the same North Pacific neighborhood, a Korean civilian airliner departed Anchorage and mysteriously drifted into Russian airspace. It was blown out of the sky by Soviet fighter jets, killing all 269 passengers and crew.

Our unease melted about 45 minutes later as we bumped along Provideniya's gravel runway. Hundreds of American-flag-waving Russian children greeted us beneath a sign in English: "Peace and Friendship between Alaska and Chukotka!" Within minutes of stepping on Soviet soil, most of us for the first time, several of the more than 30 Alaska Natives tearfully reunited with long-lost relatives. Thanks to Alascom's overnight assembly of a 25-foot satellite antenna on Provideniya's waterfront, the joyful festivities were broadcast across the world by the nearly two dozen state and national reporters on the flight.

After those 12 hours in the weathered Soviet seaport, Alaskans and their western neighbors couldn't get enough of each other. The floodgates opened to every manner of visitors – Cub Scouts to war veterans, rock and roll musicians to well insulated members of the cold-water-swimming Soviet Walrus Club – all intent on face-to-face contact after 40 years.

During the next 15 years, Alaska and the Russian Far East were a hotbed of productive U.S.-Russian relations. Fueled by $26 million in federal earmarks, the University of Alaska interacted with nearly 60,000 Russians who learned western business practices and joined cultural exchanges. Joint business ventures were explored from beer brewing to oil drilling. A dozen Alaska-Russia sister-cities and three dozen Russian Rotary Clubs were established, thanks to convenient aviation links by Alaska and other air carriers. Scores of Alaskans and Russians even married.

Today, transportation challenges and international politics seem insurmountable to productive US-Russian relations. But in our part of the world, enthusiasm for renewed ties on both sides of the strait remains high.

At 6:30 p.m. on May 31, the Anchorage Museum hosts a free public forum on the significance of the Friendship Flight with some of passengers who made the historic journey. They'll share stories of their adventure and prognosticate about future US-Russia relations. The Alaska jet which carried them to the Soviet Union 30 years ago remains on display at the Alaska Aviation Museum at Lake Hood.

David Ramseur was on the Friendship Flight as press secretary to Alaska Gov. Steve Cowper. His book, "Melting the Ice Curtain: The Extraordinary Story of Citizen Diplomacy on the Russia-Alaska Frontier," was published last summer.