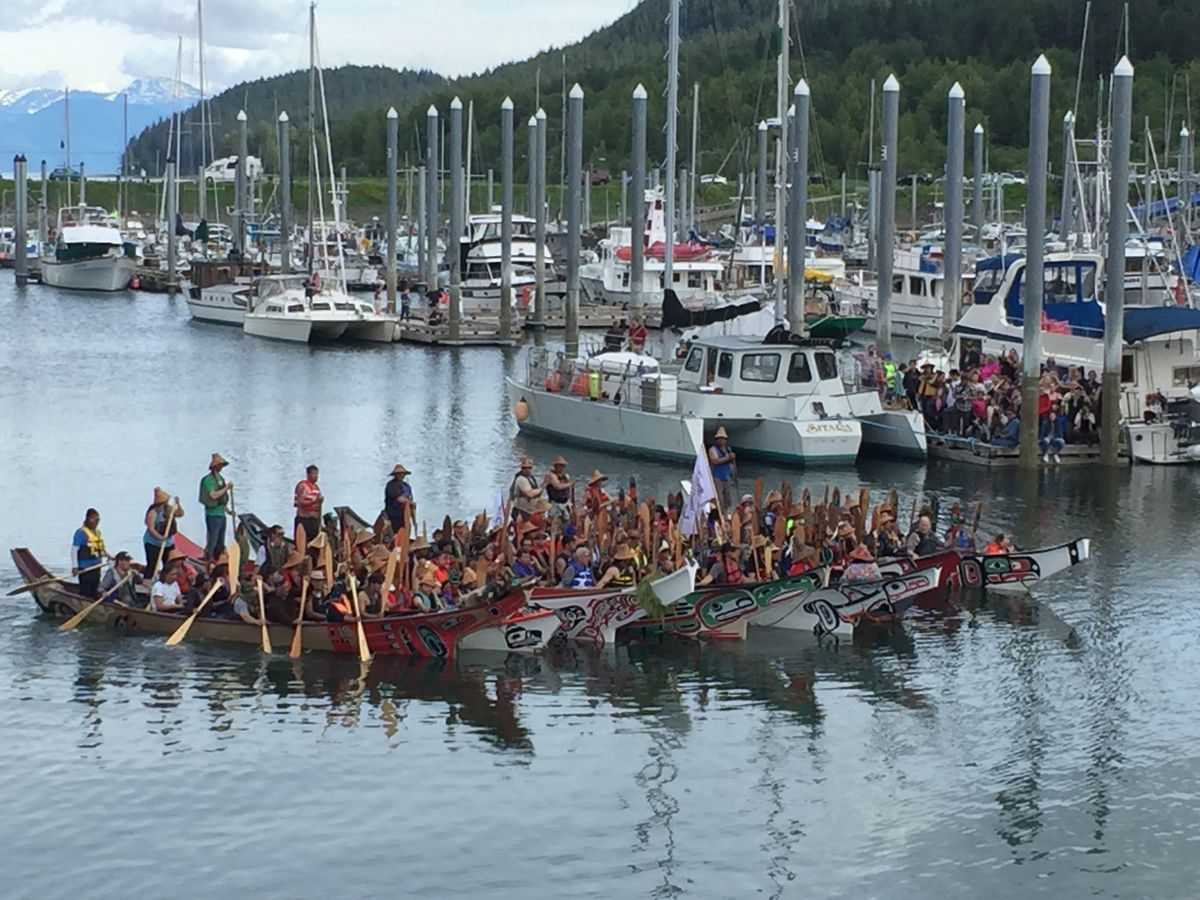 In 1982, the Alaska Federation of Natives started Quyana Alaska, an indigenous dance festival. Twenty-six years later, Quyana Alaska is a treasured highlight of every AFN convention. We have the same here in Juneau — every other year, Sealaska Heritage hosts Celebration, the largest gathering of Southeast Alaska Native people. This dance event also got started in 1982 and now draws about 5,000 people, including more than 2,000 dancers.

For this year's kickoff to Celebration, nine canoes came together into Douglas Harbor. In addition to clan boats from Ketchikan and Sitka, there was an all-woman's crew of paddlers from Hoonah, as well as a veterans-only crew from Angoon. After making an entrance, each canoe circled round, then back-paddled to a stop, waiting for the next canoe to come aside. Once all together, the canoes, with paddlers holding onto to each other, approached a gathering of elders and clan leaders. Each canoe had a designated greeter who joined in the request to come ashore, and the nine canoes came together as one to ask permission to land. When permission had been granted, the crowd of hundreds, both indigenous and non-indigenous people, joined in welcoming the canoes, "HOO… HAA… HOO… HAH." As I joined in the "HOO HAA" chant and subsequent cheering I felt a wave of communal joy come over me.

For the paddlers, the experience is far more personal. Michael Contreras with the Yakutat canoe explained, "When you are on the canoe, you work together as a team. You push through bad weather and everything else you have to make it through the end. It is very spiritual and very powerful. Everybody enjoys every second of it."

Although I felt enriched by the sharing of these traditions, I know the target audience of festivals like Quyana Alaska and Celebration is the Native youth. Heather Powell, a Tlingit language teacher from Hoonah, said, "These kids walk in two different worlds. Celebration is about not forgetting the importance of laying a foot deeply embedded in our traditional way of life." Powell, in an interview with KTOO radio, expressed concern about the rate of cultural loss but noted that "young people at Celebration have a hunger for dancing; for dancing for their grandparents."

Several years ago, I watched young people incorporate a bit of rap into the traditional song and beat of the drum. Jawaharlal Nehru of India once said, "Culture is the widening of the mind and of the spirit." I could see this widening of the mind happening right before my eyes. This year's "widening of the mind" came in the form of a Native fashion show done in a very modern style. For example, former Miss Alaska Alyssa London wowed the standing-room-only crowd with a golden gown that, with its long fringe, had an intergalactic look. Culture was again expanding before my eyes.

In an era when the president openly disparages ethnic and cultural diversity, it is so refreshing to participate in events such as Celebration or Quyana Alaska. Watching regalia-bedecked dancers perform with their clans and their kids reminds even the casual observer how much our lives can be enriched by cultures different than our own.

One of the best parts of Celebration comes at the end, the Grand Exit, where thousands of Tlingit, Haida and Tsimshian dancers line up to dance as one rhythmic motion. To dance as one  — another example of a gracious civic moment.

Although I must wait two years for Celebration to return, Anchorage residents have Quyana Alaska when AFN convenes in the fall. In the meantime, keep dancing as one when you get the chance.