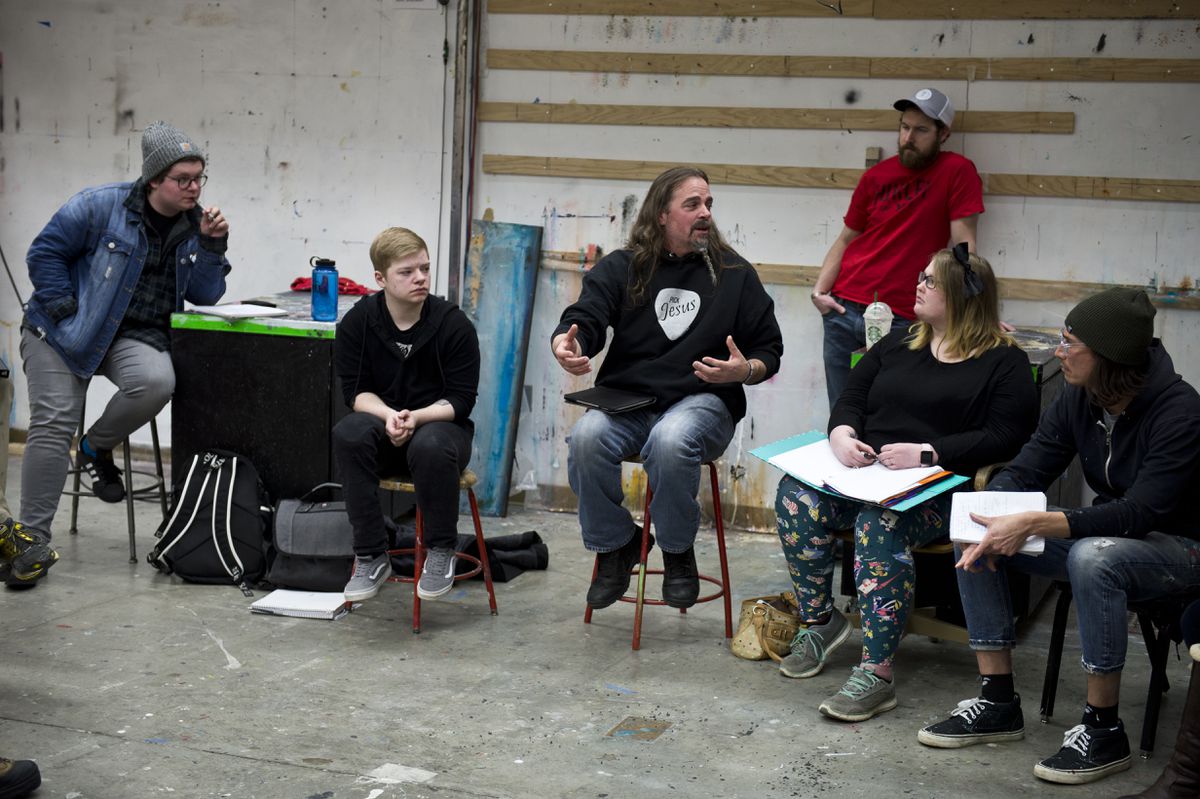 Mark Weaver, center, shares stories about his experiences with addiction to students in a UAA painting class on January 22, 2018. (Marc Lester / ADN)

Mark Weaver, center, shares stories about his experiences with addiction to students in a UAA painting class on January 22, 2018. (Marc Lester / ADN)

As Anchorage reels from a shocking crime wave, frontline workers in the drug epidemic see hope for relief.

The explosion of property crime affects just about everyone. If you haven't been ripped off yet, you probably know someone who has, and you're rightfully worried. My family got hit last week.

People who work with addicts have no doubt the drug epidemic drives the theft problem. Their clients talk about their crimes.

It's a simple economic equation. Less than $50 a day will pay for heroin, but hardcore heroin and meth addicts can't hold down a job, so they steal to survive as well as buy drugs. And the more they steal, the more drugs they can take.

[$45 million in property was stolen in Anchorage last year. This year is worse]

The solution is getting people off drugs while keeping new people from getting on drugs. Good work is happening on both ends. Since I began writing about this topic a couple of years ago, the changes are dramatic.

I checked in with recovering addicts, social service workers, doctors and law enforcers I met while covering this topic. All see positive change.

"From the general public's standpoint it looks like doom and gloom, but for the people on the ground, we have seen improvements," said Mark Weaver, a recovering addict who works with peers in Wasilla through Fallen Up Ministries and Cook Inlet Tribal Council.

Weaver puts his cell number on the street for addicts to call, knowing the key to treatment is taking advantage of the rock-bottom moment when a user is ready. Emergency room doctors often find themselves in that spot, too, with a patient hurting and ready for the hard work of recovery.

In the past, those moments were too often wasted by long, hopeless waiting lists for detoxification beds. Now, waits of a week or less are common.

April Kyle, vice president of behavioral health, said more growth is coming. Increased funding could continue the positive trend. Medicaid expansion was critical for the improvements that have happened so far, she said.

[An addict's life on Anchorage's streets – and a mother's unwavering love]

On July 23, Alaska Regional Hospital will open a new program called "One-Eighty" — as in, making a 180-degree turn — offering stabilization and follow-up for patients coming off drugs. Part of the program focuses on pregnant women, caring for their babies and families.

The model has worked elsewhere in the country said John Carpenter, who worked with heroin addicts in Atlanta before starting a week ago coordinating the Anchorage program. He said Alaska Regional's HCA chain is starting One-Eighty at three hospitals nationally.

Carpenter said patients needing help with detox will be integrated through the hospital with as many beds as there is need. The hospital will bill insurance, Medicaid, or indigent care funds.

"Everyone I have spoken to has been really enthusiastic," he said. "To us, it seems to be a really big deal."

Carpenter said he will follow patients for a year to make sure they receive behavioral therapy and social services after leaving the hospital. Experts say that's as important as detox: Dealing with underlying psychological and social problems so recovery lasts.

Kim Whitaker, volunteer leader of the Anchorage Opioid Taskforce, expects the new beds to transform the problem. Last week, she was able to help a young woman who had been missing on the streets, getting her into treatment in less than three days.

"These are the things that we've wanted since this all started, and it's happening—for there to be a bed when we need one," Whitaker said. "There's a lot happening that's good."

But money challenges remain. Emergency room doctor Andy Elsberg, who practices at Providence Alaska Medical Center, said insurance and Medicaid reimbursement can be difficult for addicts unless they have medical symptoms.

Elsberg has also worked on the other end of the problem, prevention.

He said doctors are reducing opioid prescriptions to avoid creating and feeding addictions. The Prescription Drug Monitoring Program allows him to check if a patient has already received a prescription from another hospital. The system has helped deny drugs to addicts many times.

But Elsberg said military doctors in Anchorage do not use the database, creating a dangerous loophole.

"I think it would be really simple," he said. "But when you're communicating on a huge national system to get something done locally can be difficult."

Elsberg participated in a program led by Assistant U.S. Attorney Andrea Hattan to inform young people and other community members about addiction, showing a film, "Chasing the Dragon," and talking about how to avoid drugs and the consequences of using them.

Hattan's group of law enforcement officials and doctors visited seven rural communities and spoke to school and community groups in Anchorage and Fairbanks. She said one regional rural hospital reduced dispensing of opiates by 40 percent after staff heard the program.

Emergencies can bring out the best in us, and that's part of the response to this epidemic. The dedication I've seen is amazing.

But we have a long way to come back.

Even after the plague of overdose deaths abates, the social damage of the epidemic will last. The broken families and traumatized children won't soon heal. And the loss of respect for law and basic decency will remain, too.

The values that keep society whole prevent more crime than police and jails do. Drugs destroy those values. Addicts will do anything for a fix.

This epidemic taught a lot of people how to live as criminals. They learned how to do crimes and how not to care about the people they hurt.

To those on the front line of this crisis, thank you. It won't be easy, cheap or quick for our community to recover, but your efforts are our best hope.