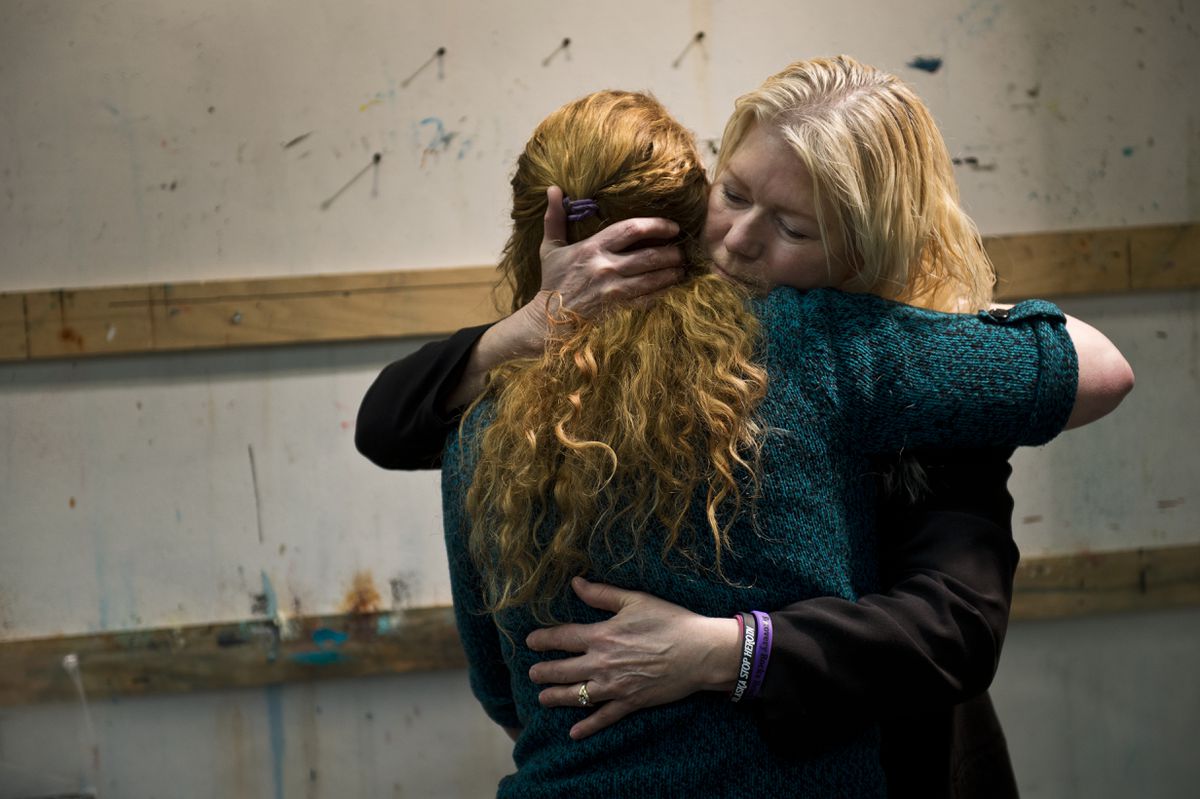 Kim Whitaker, director of Real About Addiction, embraces her daughter in a pose for UAA art students who photographed them Monday. Whitaker’s daughter, who struggles with heroin addiction, did not want to be identified. (Marc Lester / ADN)

Kim Whitaker, director of Real About Addiction, embraces her daughter in a pose for UAA art students who photographed them Monday. Whitaker’s daughter, who struggles with heroin addiction, did not want to be identified. (Marc Lester / ADN)

She drove to a certain sidewalk in Midtown and waited. Finally, her daughter emerged from where she had been hiding in a tent, tucked back in the woods of a vacant lot. She has slept and shot heroin there since July.

Arriving at the art studio, the daughter, 36, looked like an office worker or retail supervisor, well-groomed and tidy, but pale and wide-eyed with the drugs in her system. Whitaker said later she had almost certainly taken a dose to feel well enough to come out in public.

I am not using her name because, living as the only woman in a camp of a dozen homeless men and interacting daily with drug dealers, she fears publicity could endanger her life.

At first she said nothing to the class. But then, as the students, Whitaker and a pair of former addicts talked about the struggle for recovery, she began to describe her own life on Anchorage's frigid streets, chained to the need for two daily fixes of heroin.

Everyone listened. Whitaker listened. She was learning too, and thinking of her plan. She wanted to contribute to the art by doing something with her daughter she had not done in a long time.

She wanted a long hug.

Artist and teacher Steve Gordon contacted me in October for help reaching Whitaker and the Anchorage Opioid Task Force she leads.

I've written several times about members of the group, many of them recovering addicts, who gather in a church basement monthly to share encouragement.

Whitaker, an at-home daycare worker whose husband is a truck driver, came out as an addict's mother in 2015. She hands out cards with her cellphone number, ready to help users at the moment they want treatment.

(If you need that help, her group is called Real About Addiction. A group in the Valley is called Fallen Up Ministries.)

[Moms of opioid addicts touched Sullivan's heart, but will he use his vote to help them?]

Half the students Monday were beyond college age, and despite the name of the class, some weren't beginners, including the brilliant street artist James Temte. A painting he helped create in Gordon's class was acquired by the Anchorage Museum.

Caption
Mark Weaver, center, shares stories about his experiences with addiction to students in a UAA painting class. Weaver was one of several people spoke about the impact of opioid addiction to Steve Gordon’s painting class at UAA on January 22, 2018. The class plans to paint portraits of the guests. (Marc Lester / ADN)
Wait 1 second to continue.

On Monday, the students planned to learn about the opioid crisis and to take photographs to help them paint portraits of the guests.

The two recovering addicts shared stories of childhood abuse, failed relationships and serious crimes committed before they got clean.

An older student contributed how prayer helped him escape alcoholism after his own childhood trauma. A younger student wept as he asked advice for an addicted friend.

Toward the end of the class, Whitaker's daughter spoke up.

Teen misbehavior led her to a doctor — since arrested — who provided opioid pain relievers. She switched to heroin for the low cost and joyous high. Later, it wasn't pleasure but pain that kept her on it.

Her life is miserable and frightening. But detoxing is scarier. She has done it many times in two decades. Once, when her mother helped her through it, she failed after the hardest part had passed. That time, while alone in her mother's bathroom, she took drugs that were hidden there.

"You were so angry all the time," her daughter said.

"I was angry because my daughter was taken away," Whitaker said.

After the group discussion, the daughter, as if waking up, asked who everyone was. I told her they were art students.

She said she moved into the tent because she couldn't do what was necessary to afford a hotel room anymore. Her drugs cost about $40 a day. When I asked what she does to get the money, she said, "All the things people say, 'I will never do that.' "

I wondered why, with a mother who is leading the grass-roots sobriety movement in Anchorage, she doesn't leave her cold, brutal life.

She said treatment is unavailable. The experts in the room, including her mother, quickly exposed that as an excuse. They could get her in if she was ready. But she said she wants methadone, so getting off heroin will be easier.

Finally she admitted, "It's the fear. I don't know who that person is if I go to treatment."

She has overdosed about 11 times, going to the hospital twice and taking the Narcan antidote five times. She carries Narcan with her, but the code of addicts is not to use it on an OD victim unless the person turns completely blue, because it causes immediate feelings of drug withdrawal.

She said she cried with anger the last time someone "Narcanned" her — and saved her life.

She said she brings her daughter home for showers and meals. But she can't live there. Whitaker can't have an addict living with her daycare children, or her other daughter, or her daughter's own children, whom she is helping raise.

She checks the temperature every morning and every night before bed. When it's cold, she can't sleep knowing her daughter is outside.

The students needed their picture. But Whitaker's daughter declined. She didn't want her face shown.

Whitaker had a plan for that. She put her arms around her daughter and held her tight.

Speaking to no one in particular, she said all she ever wanted was to be was a mother.

The embrace lasted many seconds.

"Her heart was against my heart, and I hadn't held her like that for a very long time," Whitaker said later. "When the cameras stopped clicking, I thought, 'Oh no, it's almost over.' "