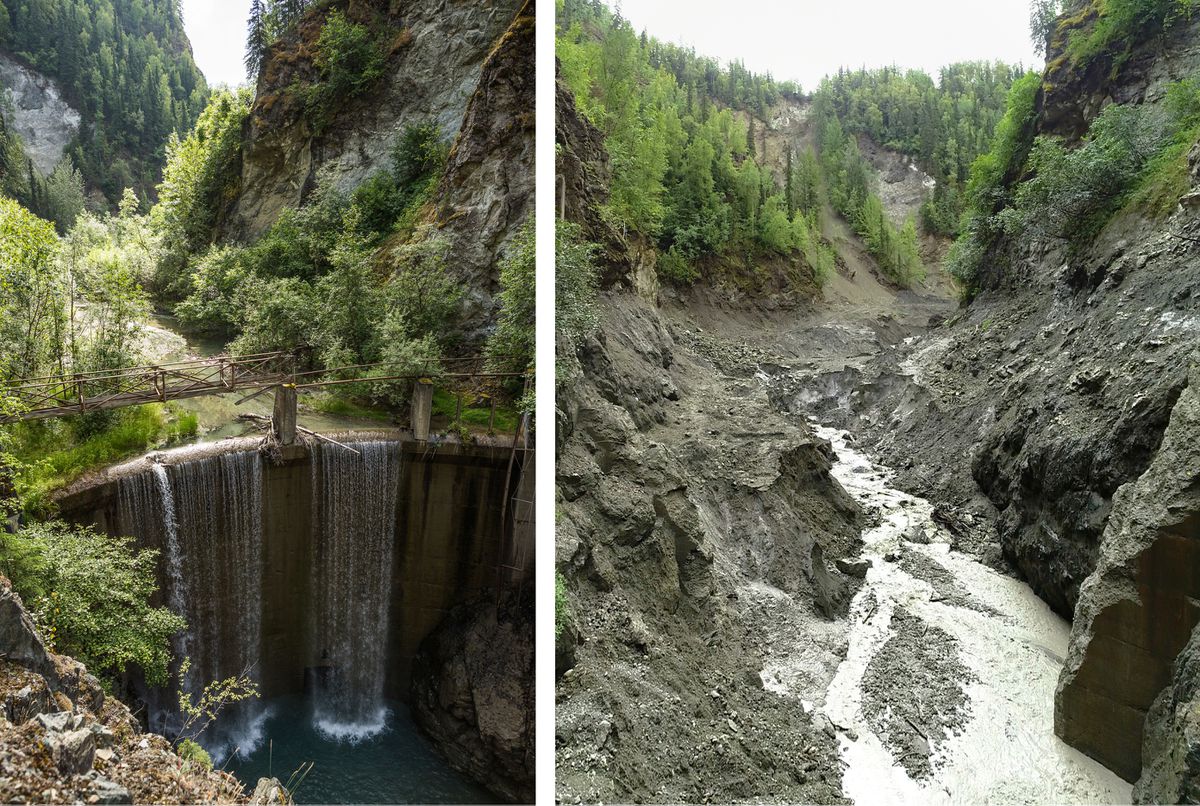 It's a little-known fact that just outside of Alaska's largest city, salmon have been banging their heads on a concrete dam for 89 years trying to access their historic spawning habitat. For nearly 100 years, a dam on the Eklutna River that was abandoned only decades after being built, has been blocking fish passage and contributed to the decline of a once-mighty salmon river.

Personally, I would like it to become a well-known fact that as of this summer, the Lower Eklutna Dam has been fully removed thanks to the hard work of The Conservation Fund, Eklutna Inc., and a host of other partners. Removing this deadbeat dam means salmon may now swim freely up and down the Eklutna River to access 22 miles of their natural spawning and rearing habitat. This is a historic occasion for wild salmon, the state of Alaska, and the people of the Native Village of Eklutna.

History lessons can be a bore, but the story of the Lower Eklutna Dam would not be complete without a brief overview of significant historic events. The Lower Eklutna Dam was an impressive accomplishment when built in 1929, but rendered useless and abandoned when the Upper Eklutna Dam was built in 1955 and fully shut off the outflow of Eklutna Lake. In 1991 Anchorage power providers, including Chugach Electric, Municipal Light and Power, and Matanuska Electric Association, received a sweetheart deal from the Alaska Power Administration and Congress that allowed them to purchase the Eklutna Power Project (which included the upper dam, power plant and associated infrastructure), circumnavigate the normal dam licensing process, and delaying mitigation for the impacts of the dam for up to 30 years, until 2027. The deal also required the utilities to undertake scientific studies starting no later than 2022, which is only four years away. To date, the power providers have yet to initiate any of the required studies and appear reluctant to undertake anything more than the bare minimum.

A 70-foot concrete wall, the largest barrier to bringing salmon back to the Eklutna River, has fallen. While salmon are now free to migrate past the lower dam site to the upper 22 miles of the river, they remain thwarted by impacts from the upper dam, which diverts nearly all water flowing from the Eklutna Lake out of the Eklutna River and prevents salmon migration into and past the Lake. With the long-obsolete lower dam out of the way, it is no longer appropriate to delay mitigation for the upper dam. The time has come to give some water to the fish and let the Eklutna flow.

The blunder of the Lower Eklutna Dam should forever serve as a reminder to Alaskans, developers and our elected officials that there are basic habitat characteristics that fish need to thrive. Alaska's salmon runs maybe strong in comparison to others, but they remain vulnerable and habitat loss and degradation is their kryptonite. The Lower Eklutna Dam was an ill-conceived project that, fortunately, can be corrected. But we need to learn from this mistake and take action now if we want to restore wild salmon to this important river.

Karl Schultz is the president of the south-central chapter of Trout Unlimited, a national nonprofit organization dedicated to the conservation of trout and salmonid species and their habitat.