Endangered species science is itself endangered 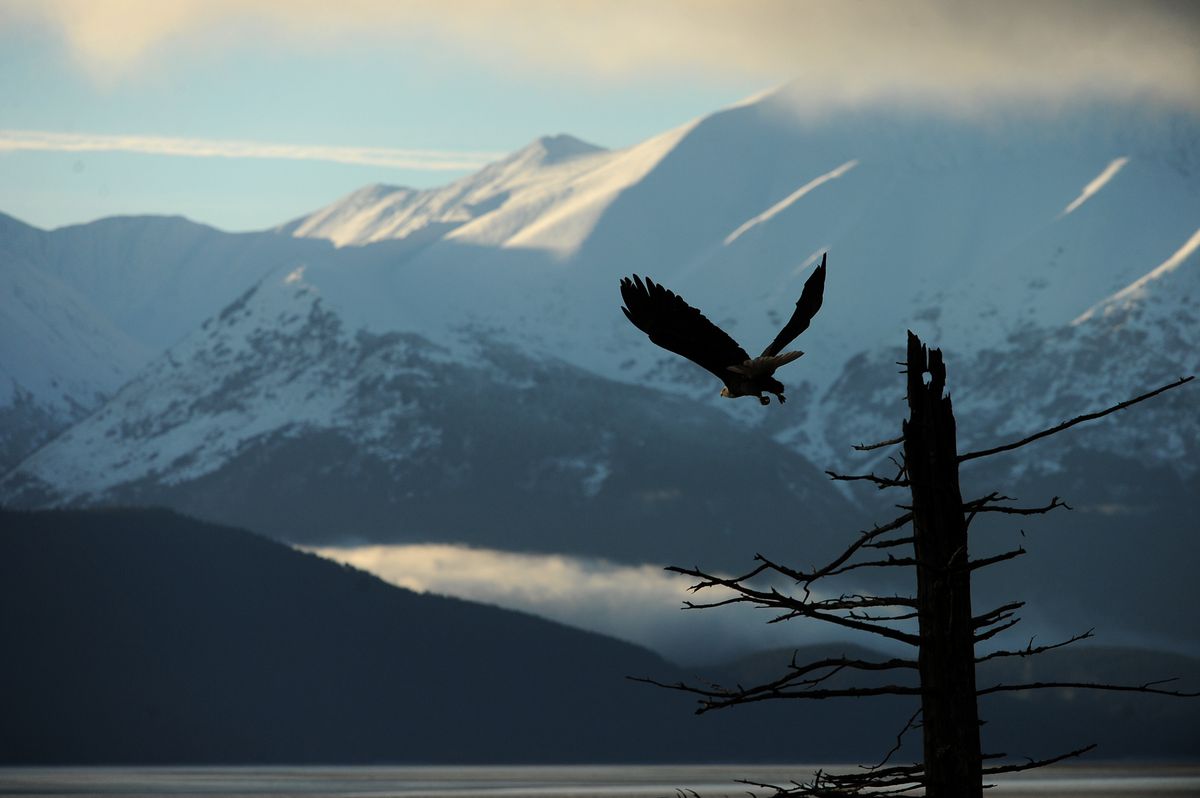 A bald eagle launches off a dead tree with the Kenai Mountains in the background along the Seward Highway and Turnagain Arm near Girdwood, Alaska, on Tuesday, November 15, 2016. (Bob Hallinen / Alaska Dispatch News)

A bald eagle launches off a dead tree with the Kenai Mountains in the background along the Seward Highway and Turnagain Arm near Girdwood, Alaska, on Tuesday, November 15, 2016. (Bob Hallinen / Alaska Dispatch News)

That means local science. The recent National Climate Assessment notes that Alaska’s temperature has been warming at twice the global rate. To get at what this means for Alaskans, we need University of Alaska scientists.

Alaskans are getting a better handle on what a warming world does to salmon runs through the work of a federally funded corps of local fisheries researchers based at the University of Alaska Fairbanks. Known as the Alaska Cooperative Fish and Wildlife Research Unit, its researchers address climate questions from an Alaska perspective.

For example, they research how melting glaciers can increase or diminish salmon numbers and for how many years. They consider how the increasing frequency of wildfires plays out on salmon streams. They compare how the same conditions can have different effects on sockeye, coho and chinook salmon.

It’s not the gloom and doom of a planet in peril. In some ways, climate change appears to have boosted some salmon counts, at least temporarily.

An accurate salmon count depends in part on a good scientist count. Here, the news is not good. Until I hired Alaska assistant unit leader Abby Powell to come run the University of Florida Cooperative Fish and Wildlife Research Unit three years ago, the Alaska unit had five faculty members. It’s down to two.

Slowly starving for lack of federal funding, Alaska’s fish and wildlife species science is itself becoming an endangered species.

The national Cooperative Fish and Wildlife Research Unit (CRU) program was established in 1935 on the premise that science, not politics, should guide management of national treasures such as eagles, bison, and moose. An administration proposal to de-fund it does away with that premise.

Nationally, hundreds of research projects on iconic species like the chinook salmon would stop. Fortunately, the House of Representatives has proposed a $1.9 million increase to the CRU budget that would help fill at least one-third of the long-standing vacant scientist positions nationwide like those in Alaska.

The Senate’s proposed $250,000 increase is essentially a cost-of-living allowance.

If the House version passes, my own interest is to fill a vacancy in my state of Florida, where the manatee came off the endangered species list this year. Wildlife science served as the basis for a recovery plan to limit collisions with boats and to conserve manatee habitat.

Consider that half a century ago, fewer than 1,000 bald eagles soared the skies of the Lower 48. Americans rallied to save our national symbol. Scientists documented eagles’ decline and investigated the effectiveness of measures to bring back the birds.

It was a triumph of wildlife policy and management. The eagle was removed from the federal list of endangered and threatened species more than a decade ago.

Evidence-based strategies ultimately served a democratic ideal of giving all present and future Americans the opportunity to experience the awe of witnessing an eagle in flight.

Salmon, grizzly bears, caribou, Florida panthers, Steller sea lions and a thousand others need the attention the eagle received a generation ago. One of the most credible and cost-effective ways to produce species-saving science is through CRUs.

I don’t seek to save species solely for species’ sake. I like to fish and hunt. For a decade, I served as the national conservation director for Ducks Unlimited.

Hunting and fishing groups are among the CRU program’s biggest supporters. Consumers spend $887 billion a year on outdoor recreation. That colossal contribution to our nation’s economy relies in part on management of our great outdoor spaces.

To keep hunting and fishing sustainable, we’d do better to expand the CRU program instead of dismantling it. The program is a scientific force multiplier. Because each Alaska CRU faculty member supervises an average of five graduate students who do field work, losing three scientists has meant losing about 15 field researchers too.

Those students become the professionals in government agencies, non-profit organizations and companies with wildlife-focused missions. They also become fish and wildlife faculty at universities.

CRU science helps determine how to manage ranges, forests and fisheries so we can continue loving our wild spaces without loving them to death.

Most states have three or fewer unit employees. The entire national budget for the CRU program is a little more than $17 million – far less than we pay for a single hour’s interest on the national debt.

We have the chance to reaffirm our commitment to evidence-based strategies for protecting national treasures by expanding, not eliminating, this important wildlife science.

Jack Payne is the University of Florida’s senior vice president for agriculture and natural resources and leader of the Institute of Food and Agricultural Sciences.