Why teach in Alaska? 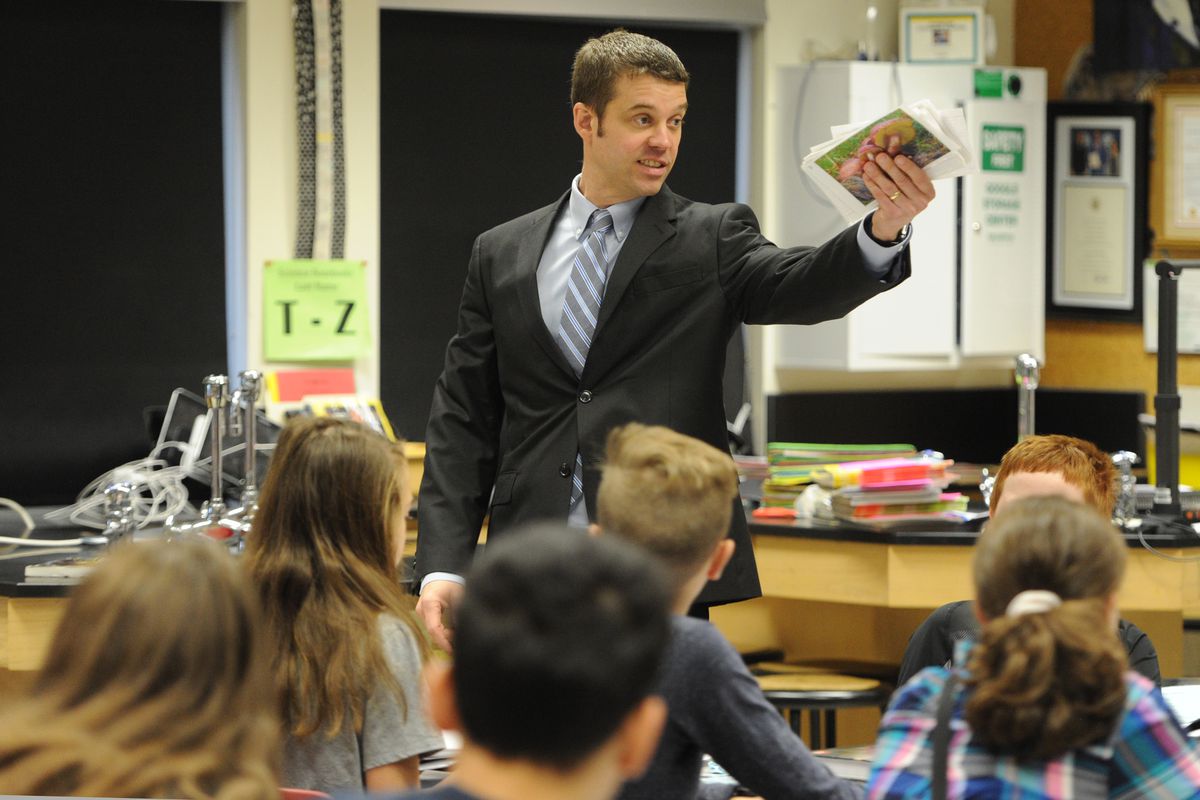 Ben Walker, a 7th-grade science teacher at Romig Middle School, works with students after being named Alaska Teacher of the Year during a school assembly on Thursday morning, Oct. 12, 2017. (Bill Roth / ADN)

Ben Walker, a 7th-grade science teacher at Romig Middle School, works with students after being named Alaska Teacher of the Year during a school assembly on Thursday morning, Oct. 12, 2017. (Bill Roth / ADN)

The most satisfying experience of being an award-winning teacher is the immense sense of fellowship that comes from interacting and collaborating with the diverse population of exceptional educators throughout Alaska. Together, we have spoken to large crowds at conferences, visited classrooms, gotten our hands dirty with students and, most importantly, had a chance to really listen to each other’s stories and those of our fellow educators, those guardians of Alaska’s most precious resource: our children.

We are a diverse group with a wide spectrum of experiences, skills, perspectives and priorities, but our years as teacher leaders in Alaska have brought two clear realities to the fore. First, Alaska’s students and educators are doing incredible things in our classrooms every day, on par with any state in the nation or country on Earth, regardless of the misrepresented data and false narratives special interests promote. We would put Alaska students and teachers up against any classroom in the world. Second, yes, there is an education crisis in Alaska, but it’s not the one you think it is.

The education crisis in Alaska is not related to test scores, indoctrination, per-pupil expenditures or any of the other misleading bullet points that fill campaign flyers and online comment sections. The real, pressing crisis that threatens the long-term quality of Alaska education is teacher attraction and retention. Although it is already hard to attract and retain teachers here in Alaska, especially in our rural and remote areas, this crisis goes beyond the $20 million we lose in annual turnover and the hundreds of unfilled positions harming districts. We want to be clear: Alaska is at the precipice of a mass exodus of teachers, including many of us.

As we have met and gotten to know thousands of teachers across our state, it has become very obvious that the most pressing question being discussed between colleagues in the copy room and with families at the kitchen table, is “Why should I continue to teach in Alaska?” This question has only gained urgency with Gov. Mike Dunleavy’s proposed budget and the administration’s rhetoric and mistruths regarding the quality and value of education and educators.

Why should a valued professional teach in a state that is dead last in the quality of teacher retirement? Those of us hired from 2006 on have little to no incentive to spend a full career teaching in Alaska. In fact, we are incentivized to leave. After our defined-contribution retirement plan is vested after five years of service, we can take Alaska’s money to one of the 49 states currently offering a defined-benefit plan and dedicate a full career of service there. Our current retirement system for teachers has created a new industry for Alaska, the “tourist teacher.” The tourist teacher comes for a short time, uses our resources, takes our money and flees back to the Lower 48 with a few souvenirs and stories, leaving Alaska students to suffer the consequences. There is not a single financial reason for a teacher to remain longer than five years on a defined-contribution retirement plan. A hybrid system would save Alaska money, help with the unfunded liability and attract and retain a high-quality teacher workforce for years to come. Yet Sen. Jesse Kiehl can’t even get his retirement bill, Senate Bill 46, introduced for a hearing. Why should we teach in a state that isn’t even willing to debate such an important bill on its merits?

Why should an expert with so many years of education and experience teach in a state that plays games with education funding, resulting in year after year of volatile spring semesters filled with unnecessary anxiety and pink slips? In what other industry are dedicated professionals annually threatened with layoffs? At the conclusion of the previous legislative session, something felt different. The conversation around stable and early funding had finally resulted in real change that was best for students. Yet here we are again, not even a calendar year later, facing the possibility of thousands of unnecessary pink slips.

Alaskans need to look in the mirror and admit the harsh truth: We have money, we just care more about our short-term liquidity than we do about our future. There is no fiscal crisis, there is a priority crisis. We prioritize being the state with the lowest tax burden in the country and one that gives its residents free money every year. We prioritize letting billions of dollars of income and sales go untaxed in the pockets of non-resident workers and tourists who use our roads, airports, police and other services for basically nothing. We prioritize subsidizing some of the most profitable companies in the world while our most fragile brothers and sisters suffer. We should prioritize funding our real most profitable resource, our children and support early funding through Sen. Mia Costello’s constitutional amendment, Senate Joint Resolution 9.

Why should someone who has dedicated their life to the betterment of society through its young people teach where the most public figure in the state wants to gut state services and pretend the world operates in silos? The disappearance of Medicaid, pre-K programs, mental health care, public broadcasting and opportunities via the ferry system, just to name a few, would have an extremely negative impact on our students’ learning, especially those most at risk. Why teach in a state where administration employee after administration employee repeats incomplete or flat-out false figures over and over without a hint of shame, such as Alaska clearly spending 76% of school budgets on instruction, not 54%, and not being “dead last” in test scores? Education in Alaska can be improved through dialogue and collaboration, not accusations and manipulated math.

“Why should I teach in Alaska?” This is a real question being asked over and over by teachers here in Alaska, and it is one that should have the governor, legislators and citizens alike concerned for the future of our education system and, therefore, the future of our state. Thousands of teachers from every region and level in Alaska are having this discussion, trying to figure out what is best for themselves and their families. None of us want to leave Alaska. In fact, Alaska is at the top of the list of places we want to live. However, it is currently at the bottom of the list of places where education is valued and spoken about truthfully. It’s at the bottom of the list where a teacher can work toward a dignified retirement commensurate with experience and expertise. It’s at the bottom of the list in terms of stable and equitable education funding. Thousands of Alaskan teachers will continue to ask this question throughout the legislative session, with the hope that Alaska comes to prioritize the betterment of our state by investing in our students. But for many of us, the answer to “Why should I continue to teach in Alaska?” is starting to look like, “Maybe I shouldn’t.”

Ben Walker is the 2018 Alaska State Teacher of the Year.

James Harris is the 2017 Alaska State Teacher of the Year.

Danielle Riha is the 2019 Alaska State Teacher of the Year.

Eric Rush is the 2018 Alternate Alaska State Teacher of the Year.

Valerie Baalerud is the 2017 recipient of the Milken Educator Award.

Amy Jo Meiners is the 2016 Alaska State Teacher of the Year.

Paul Campbell is the 2016 recipient of the Milken Educator Award.

John Bruce is the 2015 Alaska State Teacher of the Year.

Chris Benshoof is the 2013 Alaska State Teacher of the Year.