Hundreds of Alaskans died of the flu pandemic a century ago in Bristol Bay. Hundreds more were saved. 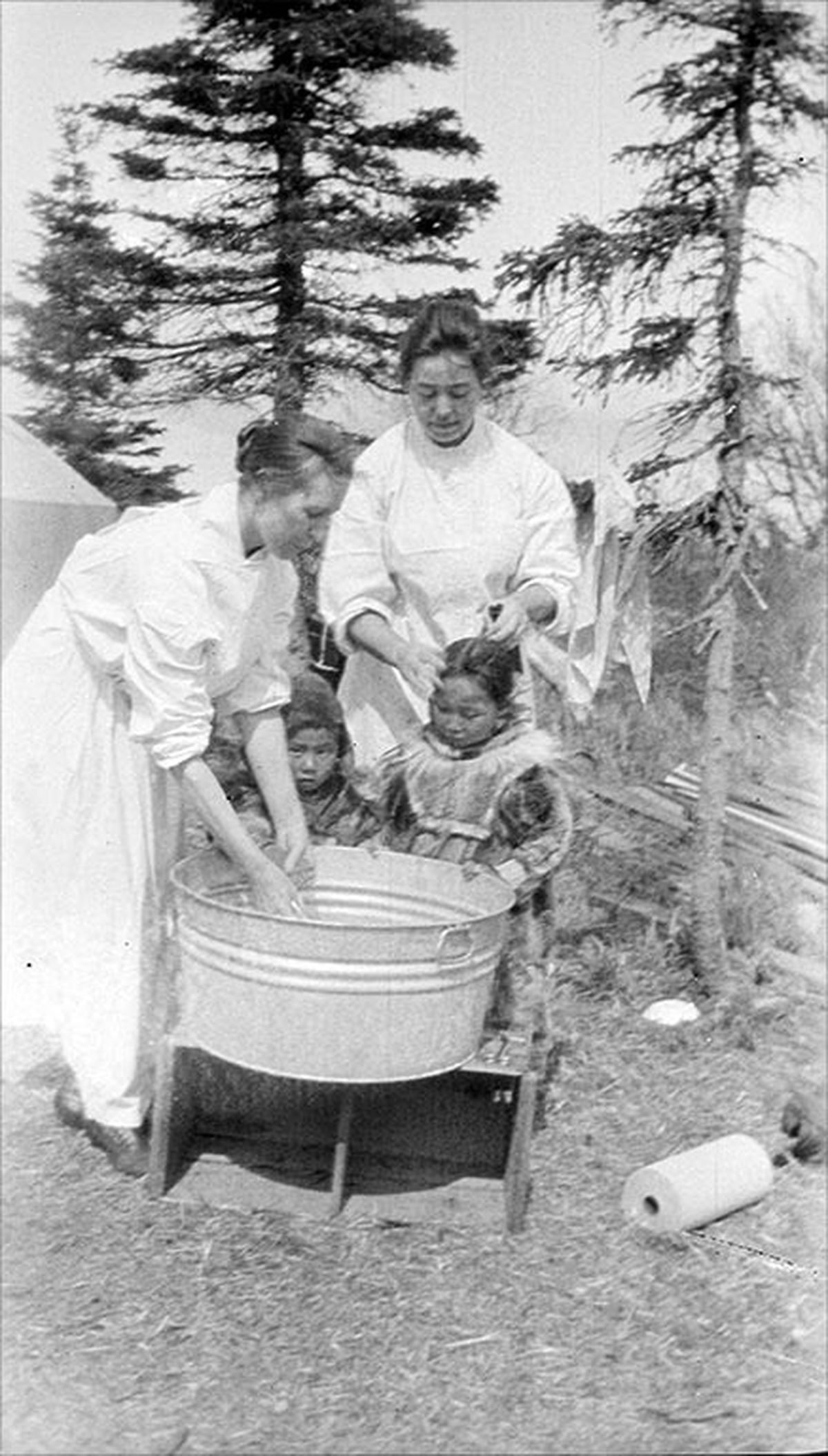 Editor’s note: This is the second in a two-column series on the centennial of the 1919 Spanish flu pandemic. The first column, “A century ago, Bristol Bay battled the Great Flu at Christmastime,” was published in the ADN on Dec. 30, 2018.

One hundred years ago, in the spring of 1919, the great Star Fleet of the Alaska Packers Association, commonly known as the “APA,” departed from San Francisco for Bristol Bay for another year of canning salmon. When they arrived weeks later and anchored off their canneries, they found the waters free of ice - a sign the winter had been relatively mild. When the crews of fishermen and workers went ashore to ready the canneries for the fishing season what they found, however, was anything but mild. They encountered chaos, desperation and death in what would become, over the following weeks, one of the greatest tragedies in Alaska’s history – the second wave of the Spanish flu.

The first wave of the flu swept up the Southeast Panhandle in the fall of 1918 but especially wreaked havoc when it invaded the Seward Peninsula. But there it stopped as winter came. A warning about the flu and instructions for implementing a quarantine for Bristol Bay were delivered to Dr. Linus H. French at the government hospital in Dillingham by a messenger on a dog team sent by Gov. Thomas Riggs in December of 1918. French complied and felt confident the quarantine and the isolation of the region would protect Bristol Bay while the flu died out elsewhere. But, to be cautious, he recommended in a letter to the governor that all the cannery ships returning in the spring be inspected for the flu before they were allowed to discharge crews.

As if to spite Dr. French’s optimism, the disease did not die out. When the APA’s ships arrived at the Diamond Northern Commercial Co. cannery at Clarks Point on May 20, their crews found many of the Natives in the local village already sick with the flu and the wives of the two winter watchmen dead. Dr. French was notified, but he couldn’t help because he and the two nurses at the hospital were themselves recovering from the flu. They were also overwhelmed treating the sick and dying in the nearby villages of Kanakanak, Dillingham and Choggiung. Similar conditions were found a few days later when the APA’s cannery ships arrived at its Kvichak, Naknek and Ugashik canneries.

An APA account at the time said a Russian Orthodox priest who held services at Nushagak carried the flu from Unalaska, which was also reeling from the disease. However, the fact the flu appeared almost simultaneously on the Naknek and Kvichak Rivers suggests more than one source. Although there is no record of any APA ships arriving with infected crews, a ship from one of the other canning companies could have been a carrier. Neither the federal government nor the territory inspected ships before they disembarked in Bristol Bay.

Where the first case of the flu occurred is not important. Given the insidious tenacity of the disease, the relative isolation of Bristol Bay was never an assurance of safety. What we do have are contemporaneous accounts of how events unfolded.

The first responders were the canning companies. There were dozens of canneries scattered around Bristol Bay in 1919, most of them affiliated with the APA. Canning salmon was then the industrial equivalent of today’s oil companies in Alaska. Because Bristol Bay was so remote, the canning companies had to build their own infrastructure and transport food, supplies and most of the personnel they needed to catch and process fish. That infrastructure included hospitals, doctors and nurses to attend to the medical needs of fishermen and cannery employees. The APA had small hospitals at Nushagak, Koggiung and Naknek.

As soon at they came ashore, APA cannery crews began to help the plague-infected villages. While the business at hand was preparing canneries for the brief but intense fishing season, the APA, according to its own accounts, spared no expense to extend medical help to the afflicted, comfort the dying, build coffins, bury the dead and, perhaps most critically, clothe, feed and house a multitude of orphans. Curiously, the flu, an H1N1 variant, spared the young and reserved its cruel wrath for their parents. When asked later by Gov. Riggs for a bill for reimbursement to submit to Congress, APA President Henry Fortmann declined the offer, stating:

“It would be almost an impossibility to segregate the quantities and costs of food, fuel, drugs, clothing, bedding and other commodities furnished the natives during the plague, to say nothing of similar articles which will be given them this winter by our people. We feel ourselves well paid by the knowledge that we were able to relieve the suffering and that our employees carried out the spirit and the wishes of the Alaska Packers Association.”

Ships from the U.S. Revenue Service, the precursor to the Coast Guard, finally arrived in mid-June with doctors and nurses, but too late to be of much use beyond burying more dead, delivering medical supplies to the beleaguered cannery doctors and gathering orphans from the far-flung coastal villages. The primary response of the government came from Dr. French and nurses Mayme Conley and Rhoda Ray at the hospital in Dillingham. Their perseverance in the face of extremely demoralizing conditions was nothing short of heroic, according to an eyewitness report from Bureau of Fisheries Warden, Mr. Shirley Baker:

“These two nurses … both having been employed by the Bureau of Education at this place for the past two years, have been working practically night and day for weeks on end -- doing all the janitor’s work, the cooking for the entire hospital, all the nursing and caring for a number of children and babies whose parents were either dead or dying -- getting up, in fact, at 6 a.m. and continuing steadily on duty until 11 p.m., and getting up thereafter during the night to attend to babies and sick persons urgently demanding attention.”

By the end of June, the flu had run its course, but the disaster was not over – the expected run of salmon in July did not come. Overfishing to provide more food for the Allied armies in World War 1 apparently decimated the 1919 brood stocks, leading to the first major collapse of the Bristol Bay commercial fishery. The poor run was doubly disastrous for a Native population already diminished and weak. Starvation and more death likely ensued in some of the more remote villages.

As the 1919 fishing season came to a close, the seasonal canneries could no longer house the orphans. Most were delivered to the care of the Dillingham hospital. Dr. French departed Bristol Bay that fall after a decade serving the region. Before leaving, however, he secured federal funding to begin the expansion of the hospital to include an orphanage.

Some historians believe as much as 40% of the adult population of Bristol Bay died from the Spanish flu, but no one really knows. What can safely be said is that nameless hundreds died and hundreds more would likely have followed were it not for the dedication of a doctor and two nurses at a scrappy government hospital in Dillingham, and the generosity and quick action of a corporate behemoth of American capitalism.

A century has now passed. Living memory of that time is gone. All who were orphaned by the Spanish flu are now dead. But the legacy of that disease has not vanished. The known ancestry of many families today begins with the young survivors orphaned in Bristol Bay’s most devastating year.