The unique challenge of the Alaska gubernatorial recall 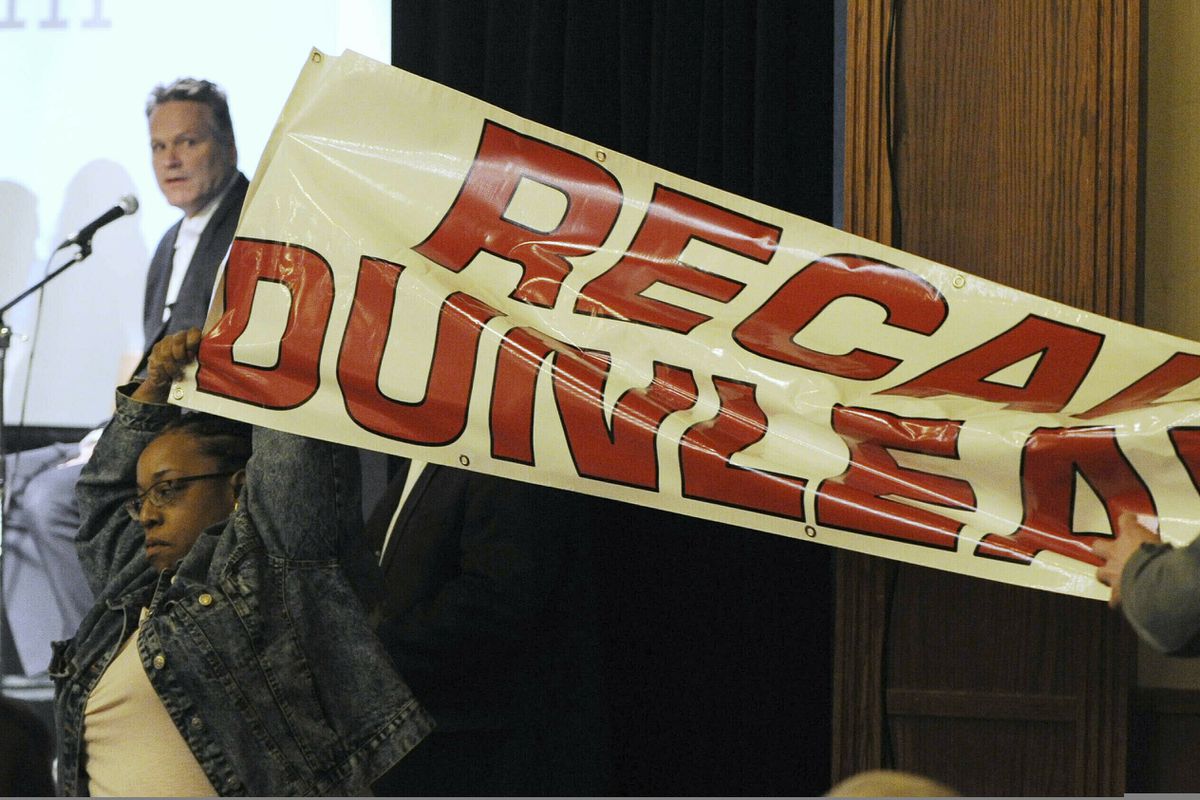 FILE - In this March 26, 2019, file photo, protestors unfurl a "Recall Dunleavy" banner as Gov. Mike Dunleavy, upper left, speaks in Anchorage, Alaska. A group that includes a coal company president and framer of Alaska's constitution is launching an effort aimed at recalling Dunleavy. The National Conference of State Legislatures says, across the country, there have been many attempts over the years to recall governors but very few have gone far enough to trigger recall elections. Grounds for recall in Alaska, according to the state elections office, are lack of fitness, incompetence, neglect of duties or corruption. (Bill Roth/Anchorage Daily News via AP, File)

FILE - In this March 26, 2019, file photo, protestors unfurl a "Recall Dunleavy" banner as Gov. Mike Dunleavy, upper left, speaks in Anchorage, Alaska. A group that includes a coal company president and framer of Alaska's constitution is launching an effort aimed at recalling Dunleavy. The National Conference of State Legislatures says, across the country, there have been many attempts over the years to recall governors but very few have gone far enough to trigger recall elections. Grounds for recall in Alaska, according to the state elections office, are lack of fitness, incompetence, neglect of duties or corruption. (Bill Roth/Anchorage Daily News via AP, File)

Recall threats against governors have become the order of the day following the 2018 elections. Five Democratic governors, in Colorado, California, New Jersey, Nevada and Oregon, have been threatened with various degrees of seriousness. Alaska Gov. Mike Dunleavy is the only Republican to be facing an active recall effort, but it is the most advanced. However, thanks to the quirks of Alaska’s law, it may have a potential impossible hurdle to overcome.

The Dunleavy recall was launched following his line-item veto cuts of $444 million in the latest state budget. A group of petitioners, including a former Republican state senator, have quickly gathered more than 30,000 signatures to get the recall on the ballot. Alaska does not hold an election to replace a recalled governor, so the lieutenant governor would step up to the position, making this recall a little less partisan. But the signatures are not the only challenge petitioners have to face.

Nineteen states allow for a recall of a governor. But there is a big division in what is needed to get a recall on the ballot. In 11 states, including the five mentioned above, there is a political recall law. Under these laws, officials can face a recall for almost any reason. Causes of action, such as alleging actual criminal behavior or incompetence, is not required at all for the recall to move forward. The famous recalls in the US, such as California Gov. Gray Davis or Wisconsin Gov. Scott Walker have taken place under these laws.

Alaska fits into the bucket holding the other eight states. This recall position, called the malfeasance or judicial recall (not to be confused with a recall of a judge) standard, requires that the petitioner show a violation of a law, lack of fitness or some manifest incompetence. These laws vary greatly from state to state. In Illinois, only the governor is covered by recall, and in Virginia, there is no election but rather a judicial hearing. But all of these malfeasance standard states require an agency or the courts to hold that a specific, statutorily delineated bad act was performed by the elected official.

In Alaska’s case, petitioners must first gather verified signatures amounting to 10% of the turnout in the previous election (in the case of Alaska’s 2018 election, this amounts to 28,501), and then have the director of the Division of Elections agree that the reasons stated in the petition meets the cause requirements in Alaska’s law. If the director approves this, petitioners must then gather signatures amounting to 25% of turnout (71,252 signatures). Only then would there be a vote. Note that Dunleavy’s running mate, Lt. Gov. Kevin Meyer, oversees the Division of Elections. And to throw a further wrinkle into the recall, if the governor loses, there is no replacement election. He would just be replaced by the lieutenant governor.

The signature total may be daunting, but it is not the most significant problem. Gaining the approval of the director has historically been an absolute bar to success in Alaska and other malfeasance-standard states. In the past, the division has rejected recalls against a governor, two state senators and one assembly representative due to a failure to state a valid cause of action.

This is not unusual and fits into the national pattern of recall use. There have been 46 state-level recalls throughout the U.S. since 1913 that have gone to the ballot. Of those, only one, against a state senator in Washington in 1981, has been in a malfeasance-standard state.

A recent court decision does provide an opening for the recall proponents. In 2017, a Superior Court judge ruled that a recall could move forward against three Homer City Council members over their support for protestors against the Dakota pipeline. The judge noted that the Alaska Supreme Court has previously held that the recall “should be liberally construed so that the people are permitted to vote and express their will.” In the end, the Homer recall took place, though all the officials survived the vote.

The Homer recall is not the only one to take place in recent years. This liberal construction of the recall has led to at least 27 recalls making the ballot since 2011, including the mayor of Whittier and a city councilman in Sarah Palin’s hometown of Wasilla.

Regardless of how the Division of Election rules, this case is almost certainly going to be appealed to the courts. The complexities of Alaska’s recall law has seen the courts uphold a very liberal construction of the rules, yet at the same time seen recalls thrown out for a failure to state a proper cause of action. This makes it unclear how the decision may come down. For Dunleavy and Alaska, this ruling could be a make-or-break moment not only for the recall, but also for the state.

Joshua Spivak is a senior fellow at the Hugh L. Carey Institute for Government Reform at Wagner College in New York, and blogs at recallelections.blogspot.com.