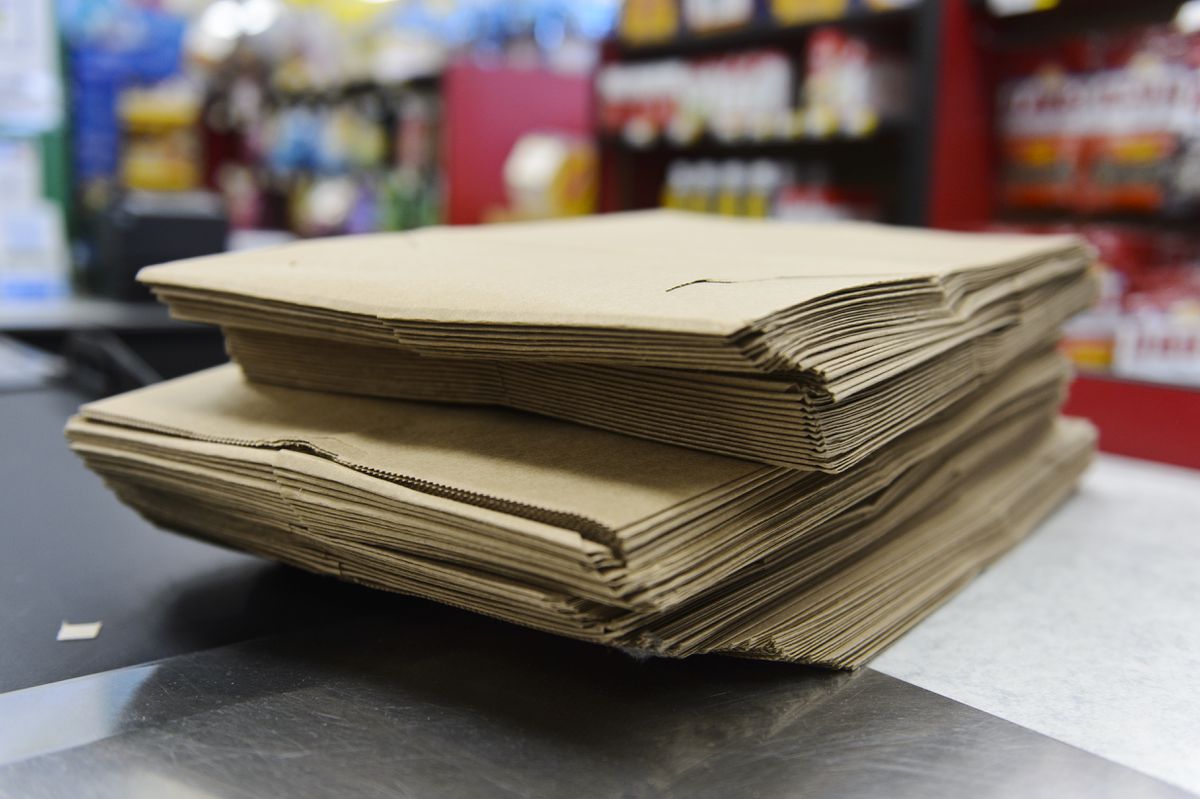 Red Apple Markets has stocked paper bags, which will be available for $.10 each once the plastic bag ban goes into effect on September 15, 2019. (Marc Lester / ADN)

Red Apple Markets has stocked paper bags, which will be available for $.10 each once the plastic bag ban goes into effect on September 15, 2019. (Marc Lester / ADN)

As of Sept. 15, Anchorage retailers can no longer provide plastic bags to their customers. Businesses are allowed to provide paper bags, though they must charge a minimum of 10 cents each, up to 50 cents for paper bags on the entire transaction. Supporters of the harsh measures in the ban claim it will reduce litter and plastic waste in landfills. However, despite good intentions, bans on single-use plastic bags are largely ineffective, punish small businesses and restrict consumer choice. Anchorage’s ban is no different.

Anchorage residents can look to other municipalities to see the negligible impact of single-use plastic bag bans on litter and landfill waste. Although plastic bags are a visible source of litter, they are not a substantial one; plastic bag litter composes less than 2% of all litter and only 0.5% of landfill waste. For example, in California, where a statewide ban on single-use plastic bags was instituted in 2016, there was a negligible 0.2% decrease in plastic bag litter as a percentage of overall litter. In fact, preliminary studies have suggested that landfill plastic waste actually increases after a ban, as consumers have to purchase heavier plastic bags to replace the additional functions of grocery bags, like small trash can liners. A recent study showed trash bag sales in California increased by 12 million pounds after the bag ban was implemented.

However, even if a ban were effective, there are serious negative consequences for both businesses and consumers. The cost to businesses of using paper bags instead of plastic is substantial; stores in other municipalities have seen bag costs increase 40% to 200%. As Jake Hale, owner of J and J Food Market in Wasilla, stated in public comments on Wasilla’s plastic bag ban in 2018, “In a standard month, my small store spends $126 on plastic bags. I pay about a penny a bag. Paper bags are 22 and a half cents a bag, so if I have to get the same amount of paper bags, monthly, that takes me to just under $3,000 a month.” Small businesses simply cannot absorb costs of this magnitude without raising prices, cutting hours or reducing staff. These unfortunate consequences of the bag ban will ripple through Anchorage’s economy and hurt small businesses the most.

Paper and fabric reusable bags have their own issues, which reasonable consumers may wish to avoid. Standard reusable cotton grocery bags must be used 131 times to “ensure that they have a lower global warming potential” than plastic bags used only once. In addition, because reusable fabric grocery bags are washed infrequently, if ever, common foodborne bacteria thrive in them. A University of Arizona study found 50 percent of reusable cloth bags in their sample carried foodborne bacteria, including salmonella and E. coli.

Anchorage’s ordinance requires that businesses which choose to provide paper bags charge a minimum of 10 cents per bag and clearly label the cost on receipts. Price transparency is valuable to consumers, but that was not the goal of this requirement. Assemblyman John Weddleton explained the purpose clearly: “If you take a paper bag you’ll get dinged a dime for every paper bag up to five per transaction. And that will aggravate people and they’re gonna say ‘I’m sick of this. I’m just going to bring my own bag.' Well that’s what we are looking for.”

As Anchorage residents adjust to the new law, perhaps they’ll ask themselves if their government’s priority should be to “aggravate people” into taking actions that could be damaging to their individual health and the local economy.

Sarah Montalbano grew up in Wasilla and graduated from Mat-Su Career and Technical High School as valedictorian. She is currently a sophomore at Montana State University studying computer science and economics. She is a policy analysis intern at Alaska Policy Forum.