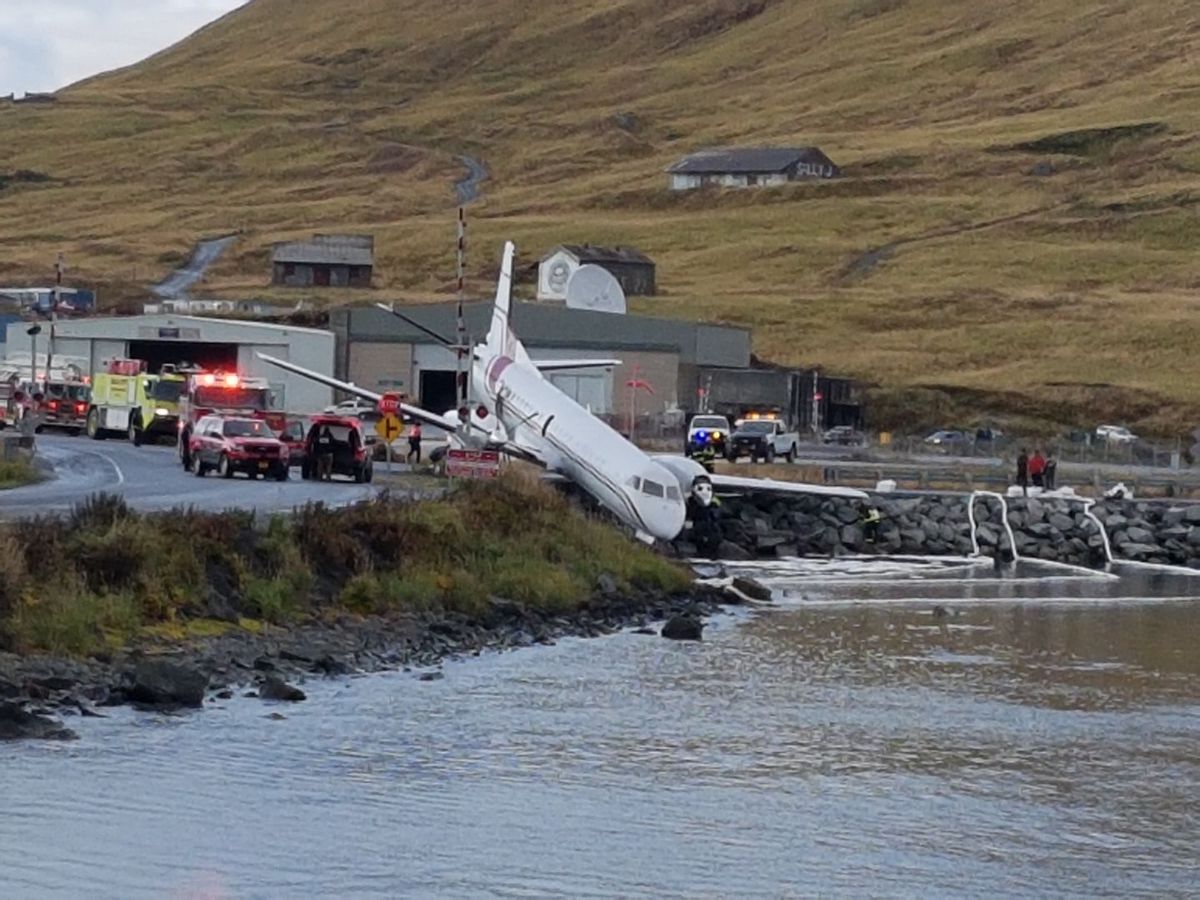 On Oct. 17, PenAir Flight 3296 overran the runway in a Saab 2000 at Dutch Harbor — resulting, according to the National Transportation Safety Board, in one death and four injuries. This was the first commercial aircraft accident in Dutch Harbor in more than a decade and garnered national attention. PenAir flies under Part 121 of the Federal Aviation Regulations, the same regulations that govern large air carriers such as Alaska Airlines and Delta. Passenger fatalities in Part 121 aircraft are extremely rare; this was only the second in the U.S. in the past 10 years.

PenAir operations into Dutch Harbor were suspended shortly after the crash. As the focus of the investigation moves from the aircraft and flight crew to the company’s operations and procedures, questions will be raised about the recent dramatic changes in PenAir’s ownership and management. Many Alaskans are aware that PenAir went through bankruptcy and was sold in October 2018. It is now majority-owned by the same Manhattan-based private equity investment firm that owns Ravn Air Group, and operates as a member of Ravn with shared management positions. (For example, Brian Whilden is listed as the Senior Vice President of Safety for Ravn and President of PenAir.) Flight 3296 is the 19th accident involving Ravn Air Group members since 2008. Thus, as much as the Dutch Harbor crash is about the new PenAir, it is also about the continuing air safety saga that is Ravn and what that company’s issues mean to Alaska’s aviation industry and the flying public.

PenAir first flew into Dutch Harbor in 1963 with company founder Orin Seybert at the controls. In the years that followed, the company operated multiple aircraft into the former World War II airfield, culminating with the Saab 340 and ultimately, to best accommodate the demands of its capacity purchase agreement with Alaska Airlines, the Saab 2000. (The agreement involves Alaska Airlines’ purchase from PenAir of certain flights, or “capacity,” between Anchorage and Dutch Harbor at a specified rate.) The 2000 is not the largest aircraft to fly into Dutch Harbor; both Alaska Airlines and MarkAir operated 737-200s. Reeve Aleutian Airways, which pioneered civilian operations into the field, also operated a variety of aircraft over the years — some on the original gravel runway — including the DC-3, C-46, YS-11 and Lockheed Electra. The common concern for all these companies was the relatively short landing distance — the paved runway is 4,500 feet long — and the unpredictable winds. As one former Reeve pilot explained to me recently, “If the wind was from the east and north, we did not even dispatch into Dutch.” (All pilots spoke to me on the condition of anonymity due to professional concerns.)

After a failed first attempt and go-around on Runway 13, Flight 3296 lost control while landing with a tailwind of 20 knots. (The archived winds at 5:30 p.m. show direction 240 degrees at 17 knots, at 5:35 p.m. direction 290 degrees at 9 knots and at 5:40 p.m., the time of the accident, direction 310 degrees at 20 knots.) The flight crew’s decision-making and flight training concerning the wind immediately came under the spotlight. Reeve, MarkAir and PenAir all had specific pilot training and standards for Dutch Harbor, and for good reason. “The alternates are not necessarily good,” said one former PenAir pilot with thousands of hours of experience in both the airport and aircraft. “The weather could be bad there also. The further you go down the (Aleutian) chain, the fewer options you have and that is why PenAir used to have so many safety measures in place.”

“Local knowledge matters a lot in Dutch,” he continued, “it has a reputation for a reason.”

MarkAir’s 737s were weight-limited, and all of the companies required special sign-offs from check airmen for pilot-in-command (PIC). PenAir also had a “captains only” rule for takeoffs and landings and a 300-hour minimum in-aircraft as PIC requirement. According to former and current PenAir pilots, this has changed under the new ownership. A page dated April 25, 2019, from the PenAir Operations Manual, states that the 300-hour PIC minimum may be waived if a company check airman who has flown with the pilot provides a letter of recommendation and the Chief Pilot approves the exception. It is unknown publicly how much Saab 2000 flight time the captain of Flight 3296 had at the time of the crash, but it is an area of investigation, and any letters providing an exception to that 300-hour PIC minimum will be looked at very carefully.

The questions surrounding the 300-hour PIC minimum keep the emphasis on pilot training and operational oversight, a critical difference from Ravn’s recent attempts to turn the public’s focus to the aircraft itself. At a town hall meeting in Unalaska on Oct. 25, Dave Pflieger, Ravn CEO and president, stated that the company would “need to go through a multifaceted process to ensure it is safe to land Saabs in Unalaska before they can return to service there.” Such comments come as a surprise to those who know PenAir safely operated the Saab 2000 in and out of Dutch Harbor seven days a week — often multiple times a day — since May 2016. As another former PenAir Saab 2000 pilot explained to me, training and proper risk assessment about Dutch Harbor were always what mattered most prior to the company’s sale. “... there were no new captains flying with new co-pilots permitted into special airports,” he stressed. “The 300-hour minimum limit was standard for years, plus PenAir pilots had to fill out special risk assessment forms for Dutch Harbor.” As to the aircraft itself, there was little ambiguity as to how to handle the Saab 2000. “There were stringent tailwind limitations that could not be exceeded,” he said.

Both former PenAir pilots emphasized that before the ownership change, company dispatchers conducted an assessment of landing performance for the total weight of the aircraft, including airport headwinds and tailwinds, prior to departure. In flight, the pilots would recalculate that performance based on current conditions at Dutch Harbor.

It is unknown if this was done for Flight 3296.

A circuitous path of ownership

Pilot training questions always lead back to company operations and oversight which, in the case of PenAir, requires a trip through the byzantine path that is Ravn Air’s corporate history. It starts with the 2008 merger of Hageland Aviation and Frontier Flying Service, during which a corporation, HoTH Inc., was formed by the Hajdukovichs, Twetos and Hagelands. In 2009, the newly named Frontier Alaska purchased Part 121 operator Era Aviation and promptly rebranded itself as Era Alaska. In 2014, to avoid contentious name associations with Era Helicopters, Era Alaska rebranded as Ravn Alaska. Era Aviation’s name formally changed to Corvus Airlines and Frontier and Hageland began flying under Ravn Connect. Then came a financial crunch, and in May 2015, a Delaware-based corporation, the Ravn Air Group, was formed. In August of that year, J.F. Lehman Co. announced it had acquired a majority stake in Ravn Air Group, alongside W Capital Partners, another equity firm from New York, and the Hajdukovich family. By December 2015, Ravn Air Group was listed as 100% owners of HoTh Inc.; Lehman was now majority owner of Frontier, Hageland and Corvus.

By September 2017, no Hajdukovich held a management position in Ravn, and the family was referred to in a press release as holding only a “minority interest." Then, in October 2018, the bankruptcy court approved PenAir’s purchase by a new company, Peninsula Aviation Services, over state concerns regarding issues of safety and decreased competition. Peninsula Aviation Services, which also purchased the name “PenAir,” is 100% owned by HoTH Inc. Ravn Air Group now had four air carriers.

Obviously, there is a lot to Ravn’s corporate and accident history to process. But the main point is this: Through all of its name changes and ownership upheavals, as it transformed from an Alaskan-owned company to one that primarily belongs to a couple of New York City equity firms, the most appalling constant in Ravn’s operation is that its planes have crashed. In villages and towns, in the Bush and on the road system, in everything from the Cessna 207 to the Beech 1900, Ravn Air has crashed. PenAir operated thousands of Saab 2000 flights in and out of Dutch Harbor, but after owning and operating the airline barely a year, Ravn’s drama has added the 2000 to its list of wrecks. A fatality accident in a Part 121 passenger carrier is now yet another part of Alaska’s air safety record. And this accident is, of course, Ravn Air. Again.

There is no doubt that Ravn Air Group operates more daily flights than any other aviation company in Alaska. But size does not excuse its repeated crashes nor suggest that Ravn’s significance to the state’s transportation system grants it leniency from regulatory standards. Thirty-nine people have been killed and injured under its corporate flag since 2008; seven of them have been killed since J.F. Lehman became majority owners. Perhaps it is time Ravn management stopped looking at planes and pilots — six of whom died working for the company — and instead consider the responsibility of their own corporate policies, actions and decision-making in this ongoing air safety catastrophe.