Alaska Black Caucus re-lights its torch in the 21st century 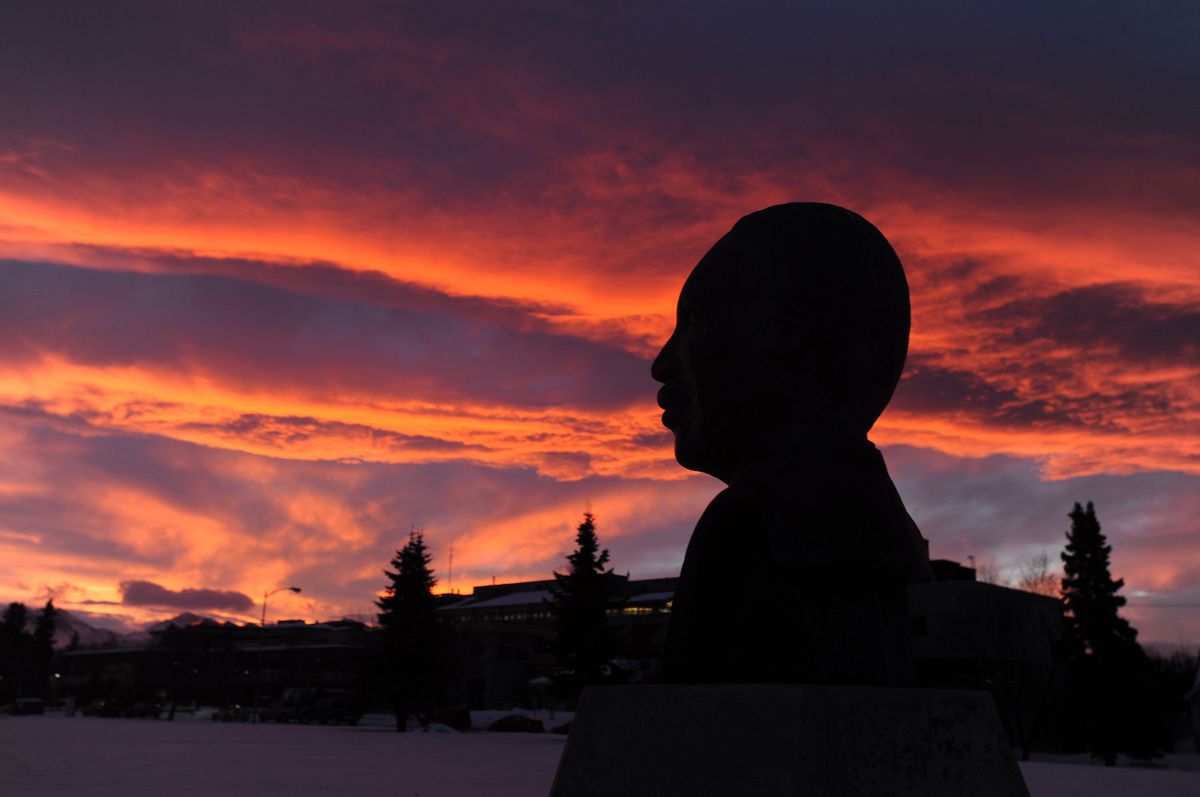 A stunning sunrise greets the bust of Dr. Martin Luther King, Jr. at his Anchorage memorial as the holiday honoring him dawns on Monday, January 20, 2014, on the Delaney Park Strip.

A stunning sunrise greets the bust of Dr. Martin Luther King, Jr. at his Anchorage memorial as the holiday honoring him dawns on Monday, January 20, 2014, on the Delaney Park Strip.

With our inaugural column for the Anchorage Daily News, we would like to reintroduce our organization to Alaskans who have resided here before or during the start of the construction of the trans-Alaska oil pipeline in the mid-1970s and those who have arrived since the beginning of the third millennium. The Alaska Black Caucus was formed in 1975 to involve the growing African American communities throughout the state of Alaska in the affairs of a state that was experiencing growth.

Our name, Alaska Black Caucus – ABC, while not a misnomer, does belie the racial make of our organization’s membership back in the 1970s through the mid-1990s. Our membership was multi-racial and nonpartisan, to include executive officers and members of the board of directors. This fact was the result of our organization’s willingness to address issues important to those well beyond our community. Also, we took stands on issues that stymied the economic growth of our state due to often-oppressive federal land policies that negatively affected all who are proud to call themselves Alaskans.

Examples that readily come to mind are those disparities in sentencing of minorities compared to those from our majority counterparts of the same crime. The state conducted a disparity-in-sentencing study that documented minority offenders were being sentenced to lengths of incarceration up to four times that of majority offenders. We were active participants in lobbying efforts, to the extent possible, not to have provisions of the Alaska Lands Preservation Act — commonly referred at the time as the D-2 Lands Act, passed in 1980 — make it totally impossible for the private development of Alaska’s abundant natural resources to take place. The state’s ability to promote development was similarly affected.

Further, we were very active in our support for the passage of bond issues needed to build new and remodel existing schools to accommodate the growth Anchorage was experiencing for much of the 1970s.

The Alaska Black Caucus, as shared by old-timers, took pride in its leadership role in mitigating the potential for racial strife, based on a voter initiative that removed Dr. Martin Luther King’s name from the newly constructed Performing Arts Center. The compromise the Caucus helped to hash out was to name a park in downtown Anchorage and the Anchorage School District’s Career Center, in his honor.

By the 1990s, growth in Alaska started to slow, members of the original Alaska Black Caucus started reaching retirement age or returned to the Lower 48 to be with their families.

However, it’s now time for a new generation to re-light the torch and have the Alaska Black Caucus meet the challenges of the 21st century. We plan to do just that, starting with our organization’s coordinating of the Annual Bettye Davis African American Summit II, which will take place Saturday, Feb. 29, at Bartlett High School, in celebration of Black History Month. Local and national speakers will be discussing critical issues on health, economics, justice and education. Visit our website or the Alaska Black Caucus Facebook page for more information. We hope to see you there!