A shoelace is a deadly weapon 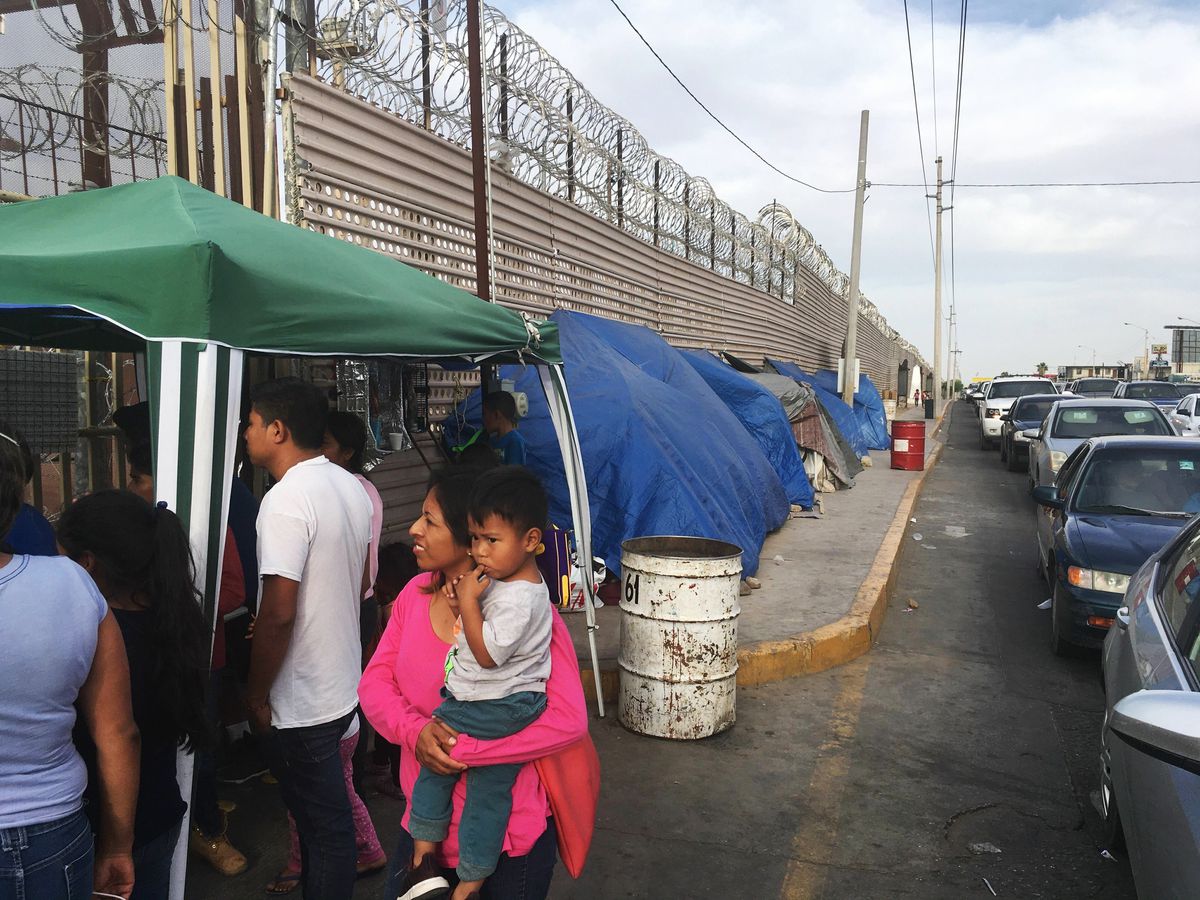 FILE - In this May 5, 2019, file photo, migrants walk between tents, left, and cars waiting to cross the border in San Luis Rio Colorado, Mexico, and Arizona. Newly unsealed court documents show that many U.S. holding cells along the Mexican border were less than half-full, or even empty, during an unprecedented surge of asylum-seeking Central American families. The documents cast doubt on the Trump administration's claims that people had to wait in Mexico because there weren't enough resources to accommodate them. (AP Photo/Elliot Spagat, File)

FILE - In this May 5, 2019, file photo, migrants walk between tents, left, and cars waiting to cross the border in San Luis Rio Colorado, Mexico, and Arizona. Newly unsealed court documents show that many U.S. holding cells along the Mexican border were less than half-full, or even empty, during an unprecedented surge of asylum-seeking Central American families. The documents cast doubt on the Trump administration's claims that people had to wait in Mexico because there weren't enough resources to accommodate them. (AP Photo/Elliot Spagat, File)

A shoelace is a deadly weapon.

This is the thinking behind the U.S. Border Patrol’s policy of removing shoelaces from every person crossing the U.S.-Mexico border seeking asylum. While there may be a theoretical risk that the folks in custody can use a shoelace to harm themselves or others, there is real danger when the shoelaces are not returned or replaced when the asylum seekers are released back across the border in Mexico. But first, a little background.

During the fall of 2018, there was an influx of tens of thousands of migrants mostly from Mexico and Central America who were fleeing danger for their political or religious views and rampant drug and gang violence in their home countries. A person who presents him or herself to the U.S. border and seeks asylum for those reasons has, by law, a right to be admitted to this country while their case is adjudicated. Last year, however, the Trump administration dealt with the large numbers of these migrants by “detaining” them in what are essentially jails, some in cages, and separated thousands of children from their parents. Shocking pictures of children being held in cages moved the American public so much that the pressure on the administration caused the policies to be modified to be only somewhat less inhumane.

Now there is a policy cynically named the Migrant Protection Policy, otherwise known as the “Return to Mexico” policy. Anyone at the border who is seeking asylum is given a number and must wait in a border town until their number comes up. The waiting time in Nogales is currently running up to four months, and there are about 4,000 waiting. (Tens of thousands wait in other cities bordering the U.S.). When their number is called, they are held in a detention center for several days (crowded, poor conditions, lousy food) until their claims are initially evaluated by an agent. This is when the shoelaces are taken from them.

Under the MPP, if their claim is judged to have any merit, they are given a date to appear before an immigration judge several months in the future and instead of being released in the U.S. to travel to their sponsors, they are forced back to Mexico without their shoelaces. The border cities in Mexico are notoriously rife with drug cartels and gangs and are classified by the U.S. as some of the “most dangerous cities in the world.” Releasing these people back to these cities is like painting a big red M on their back for “Migrant.” The cartels now know that these people (men, women, families, children) had enough resources to make it from their home country to the border and that they have family or friends willing to sponsor them in the U.S. and have at least some money. These folks are ripe for kidnapping, rape, assault and theft. There are more than 600 documented cases of such events over the last year and 130 cases of children being kidnapped and held for ransom. It is safe to assume that the actual number of these events is much higher.

To add insult to injury, at some border crossings like Tucson, the migrants are taken back to Nogales (50 miles south of Tucson) and given an immigration court hearing in El Paso, Texas, months in the future. They are expected to find their way to Ciudad Juarez at the El Paso border crossing (about 350 miles) on their own.

This is just one example of how our government is treating legitimate asylum seekers who by our (and international) law have a right to enter this country while their case is adjudicated. There are countless other examples of the cruel and inhumane way we are treating our fellow humans.

The border crisis has largely left the mainstream media so most of us have no idea what is happening. The current treatment of migrants is inhumane. Once the American people are informed of the conditions to which these folks are subjected there is hope that they will also demand changes to these policies as they demanded policy changes after the pictures of children in cages appeared.

One thing to do is to lobby our representatives and senators to inform themselves of the border conditions and ask them to inform themselves of the conditions to which we are subjecting these people . This is a national problem and a national disgrace. We could further ask our officials to visit the border, to conduct hearings into this illegal MPP policy and its ramifications and to support the Refugee Protection Act of 2019, which has been introduced in both the House and Senate. Lastly, I hope our local newspapers access these stories that are appearing in the media in border towns such as El Paso, Tucson and Yuma to keep this humanitarian issue on the minds of Americans.

Hal Smith, M.D., is a recently retired emergency room physician in Homer. He is spending time this winter at a migrant shelter called Casa Alitas in Tucson.