Vote for Proposition 13. And hold the municipality accountable. 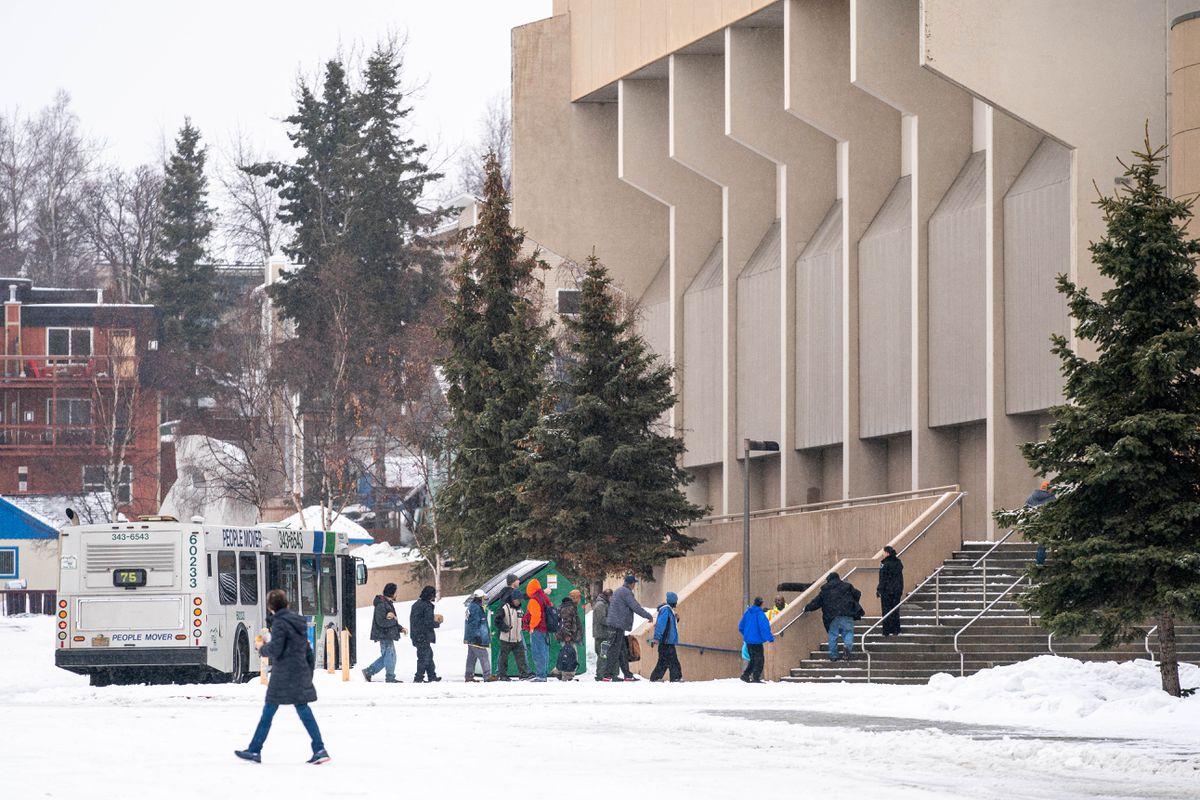 People get off a bus at a temporary homeless shelter, setup in the Sullivan Arena, on Saturday, March 21, 2020. The Municipality of Anchorage is converting both the Sullivan Arena and Ben Boeke Ice Arena into emergency homeless shelters, which will allow for people to sleep at least 6 feet apart in the hopes of controlling the transmission of COVID-19. (Loren Holmes / ADN)

People get off a bus at a temporary homeless shelter, setup in the Sullivan Arena, on Saturday, March 21, 2020. The Municipality of Anchorage is converting both the Sullivan Arena and Ben Boeke Ice Arena into emergency homeless shelters, which will allow for people to sleep at least 6 feet apart in the hopes of controlling the transmission of COVID-19. (Loren Holmes / ADN)

Proposition 13 would enact a 5% tax on alcohol and dedicate an estimated $11-15 million per year to police, criminal justice, and first responders; address child abuse, sexual and domestic violence; and behavioral health prevention, detox and treatment programs to “prevent and address Anchorage’s homelessness crisis.”

This is a tax on a product that has an economic cost to the state of Alaska into the billions of dollars. Consumers of alcohol who visit the greatest human and social costs on our community (in the form of fetal alcohol spectrum disorders, negligent and abusive parenting, crime, victimization, homelessness, and medical and behavioral health, etc.) would end up paying a greater share of those costs. I need no other reason to vote in favor of Proposition 13. An influx of $11-15 million per year would clearly help offset these costs.

I have some pause in that I see no specific dedication to addressing the elephant in the room of the “homelessness crisis”: the illegal encampments and homesteads that plague our community. Spring has now sprung, and the Municipality of Anchorage’s lack of attention to encampments throughout the winter melts clearly into view. The Municipality has generally acquiesced to illegal encampments in our public spaces, despite it being morally wrong for government to fail to shelter people who have no alternative but to sleep in public, criminally wrong for those who have alternatives to occupy public space, and entirely unsafe for campers and the community.

Mayor Ethan Berkowitz defines the “elephant” as a homogeneous population of the down and out with behavioral health issues and no alternatives to camping. Encampments are sanctioned through inaction with the justification that there is no place for ‘them’ to go and there is no money to ‘fix’ the problem. The Municipality flinches from systematic eradication of illegal encampments because of the 9th Circuit case Martin v. Boise. But, this case only narrowly holds that homeless involuntary public campers cannot be prosecuted for sleeping in public if there are not indoor shelter alternatives available and provides protections for limited property of campers. It does not protect campers who do have access to temporary shelter but who choose not to use it. Nor does it allow the massive “homesteading” that occurs or prevent the Municipality from enforcing other laws that prohibit the many other public health and safety threats the camps and campers present. The Municipality need not quake in fear of litigation. It must only follow the limited ruling of this case and effectively use resources.

A strategic plan to eliminate illegal camps would do what the Municipality has failed to do for years: identify who the campers are and why they are camping; determine the emergency shelter capacity required for those who really need and will accept it; provide the resources needed to effectively enforce public nuisance laws; move campers to shelter and assure they are connected with help they will need to obtain and keep permanent housing. The Municipality cannot not “fix” all the issues that lead persons to choose illegal camping as a lifestyle, and the Martin case does not require it to do so. It allows the Municipality, with resources from the alcohol tax, to prevent them from illegally occupying our community’s public spaces.

The Mayor prefers to primarily focus on the Housing First model: provision of affordable housing to the homeless coupled with support services. His has been the “if you build it they will come” approach that relies entirely on permanent housing. When all are housed, voila, the problem disappears. Until then, there is nothing that can end the encampments.

The fallacy is that sufficient housing stock and services for all those who need it are unavailable and, even at the most optimistic, will not be available for many years. Meanwhile, campers who wish to line up for Housing First are disabled from enrolling in and navigating the bureaucracy of that system by their location. The access points for the Coordinated Entry System are in and around the shelters, not in wooded camps. Many campers don’t even wish to try due to the logistics. Emergency and transitional shelter that proactively moves homeless people upstream must be a large part of the continuum to address Anchorage’s ‘homelessness crisis.”

The Administration’s dealing with encampments fails campers and the community. Camps are targeted for abatement not based on a strategic plan, but on the loudest citizen complaints. Police and social workers assure there is shelter capacity to accommodate all campers whether they need it or not, notice the camp or zone, hand out business cards and try to motivate campers to move to shelter or seek services. Parks and Recreation staff then abandon their mission to improve and beautify parks to clean up the tons of garbage left behind. Summer of 2019 counted only about 10% of campers ever moving to shelter after their camps were abated regardless of capacity. The rest tended to move a short distance down the trail and set up again, and were not prevented from doing so. This is a costly whack-a-mole strategy that reports outcomes not by camper progress, but by tons of trash collected.

Contrary to the Mayor’s belief, campers consist of multiple demographics. Some are chronically homeless, some situationally. Some have mental disorders, some not. Some are travelers, some entrenched. Some are law-abiding, some engage in thefts from residents and businesses, some in sophisticated bike theft, chops and resale rings. Some commit crimes against each other. Some embrace a novel right to ‘houseless’ status and to homesteading in parks. Many aggressively claim a right to privacy in the domain of their illegal camp and defend them with belligerence and a flourish of weapons. Most are drug- or alcohol-involved.

A strategic plan of compassionate and thorough encampment eradication must be instituted to address Anchorage’s “homelessness crisis.” This starts with the kind of clean, safe and secure shelter that we have seen recently opened at the Sullivan and Ben Boeke arenas and a plan with outcomes calculated to assure sufficient and secure shelter capacity, park patrol, systematic determination of camper demographics and needs, proper notice, warm transfers of campers to shelter and services, abatement and prevention of re-settlement to protect those campers with no shelter alternative. Such a plan should also assure discomfort for and ultimately prosecution of intractable campers who do have alternatives yet chose to degrade our parks. It is the duty of elected government to assure that both campers and the community receive equal protection of the law.

Alcohol tax funds could do that, along with many other things. The community will hold the Municipality accountable for such a plan, whether or not Proposition 13 passes.