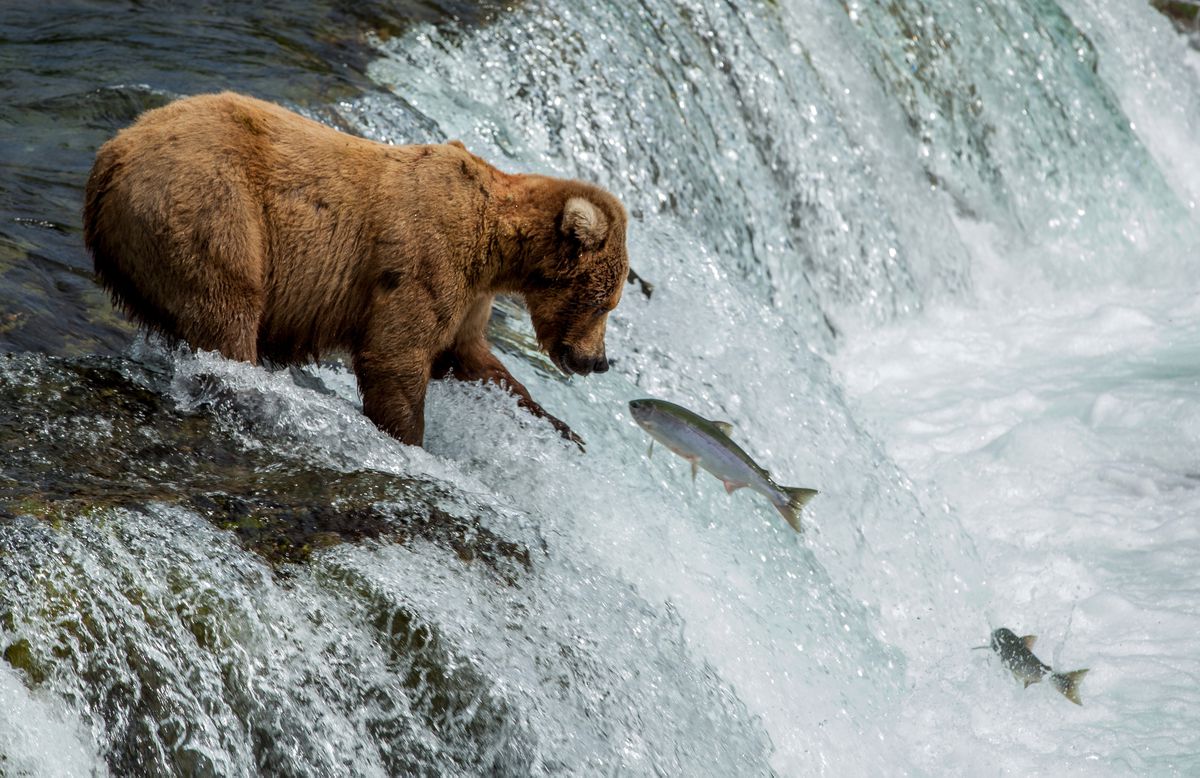 A brown bear works to catch a meal on Wednesday, July 1, 2015, at Brooks Falls in Katmai National Park and Preserve. Bears are gathering to feast on sockeye salmon moving up the Brooks River from Naknek Lake to reach spawning grounds at Lake Brooks. (TARA YOUNG / ADN Archive)

A brown bear works to catch a meal on Wednesday, July 1, 2015, at Brooks Falls in Katmai National Park and Preserve. Bears are gathering to feast on sockeye salmon moving up the Brooks River from Naknek Lake to reach spawning grounds at Lake Brooks. (TARA YOUNG / ADN Archive)

Alaskans face agonizing decisions regarding the upcoming commercial salmon fishing season in Bristol Bay and beyond. On one hand, these fisheries are critical economic engines of many regions. On the other hand, fishing may put local communities at increased risk of COVID-19 infections with serious health consequences, given the seasonal influx of non-local harvesters, processors, biologists and managers. At its core, the difficult decision of whether to open fisheries this year requires the need to balance human health risks against the livelihoods of people in the fishing and processing industries, and the communities in which they are embedded. As fishery scientists, we believe there is little need to worry about the biological or ecological impact of high wild salmon escapements or ‘overescapement’ in the event fishing is restricted this year, and suggest that decisions should be squarely focused on the potential impacts to human health and livelihoods.

The management of sustainable salmon fisheries in Alaska is based on a ‘fixed escapement policy’ where the goal is to allow enough salmon into our rivers and lakes to fill the spawning habitat, and on average produce maximum or optimum long-term fishery yield. When more fish enter streams than targeted by escapement goals, this is referred to as ‘overescapement’ by fishery scientists and managers. So then, if salmon fisheries are restricted in the summer of 2020 due to the COVID-19 crisis, will the resulting ‘overescapement’ cause damage this year, or in future years, to salmon or their ecosystems?

The answer is likely no. Substantial evidence from peer-reviewed scientific research indicates that high densities of salmon on the spawning grounds leads to increased pre-spawning mortality, fish run out of space and sometimes extract too much oxygen from the water and die before laying eggs, but this is far from certain to have a catastrophic impact on future salmon production. The extra salmon carcasses would likely be a windfall for bears and other scavengers, as well as for the trees and plants surrounding salmon streams.

What about future years? Although high spawning abundance can reduce growth of juvenile salmon in several subsequent years, on average the impact to future salmon returns is minimal. Perhaps the best evidence that ‘overescapement’ does not detrimentally impact salmon returns comes from the sediments of sockeye salmon-bearing lakes. Small amounts of sediment accumulate on the bottom of lakes each year, trapping with them information on lake conditions. Sampling sediment from the lake bottom creates a sort of time machine, from which researchers can reconstruct the abundance of salmon going back millennia using the signatures of nitrogen carried into freshwater by ocean-feeding salmon. These studies show that in Bristol Bay, for example, there are as many total salmon now as there were centuries ago. The fact that salmon were just as abundant before large-scale commercial fisheries as they are now, strongly suggests that a single year of ‘overescapement’ will not damage future salmon returns. Similarly, the extra nutrients carried by ‘overescapement’ do not appear to increase salmon production by fertilizing the ecosystem.

While there are no clear nor easy answers to our current dilemma, one choice holds true. Continuing to protect the habitats that allow our salmon ecosystems to be resilient to disturbances such as ‘overescapement’ and future climate change is a sustainable and profitable long-term strategy. Let’s focus on taking care of each other; the ecosystems and wild salmon will be fine on their own.