Moving from protests to productive action 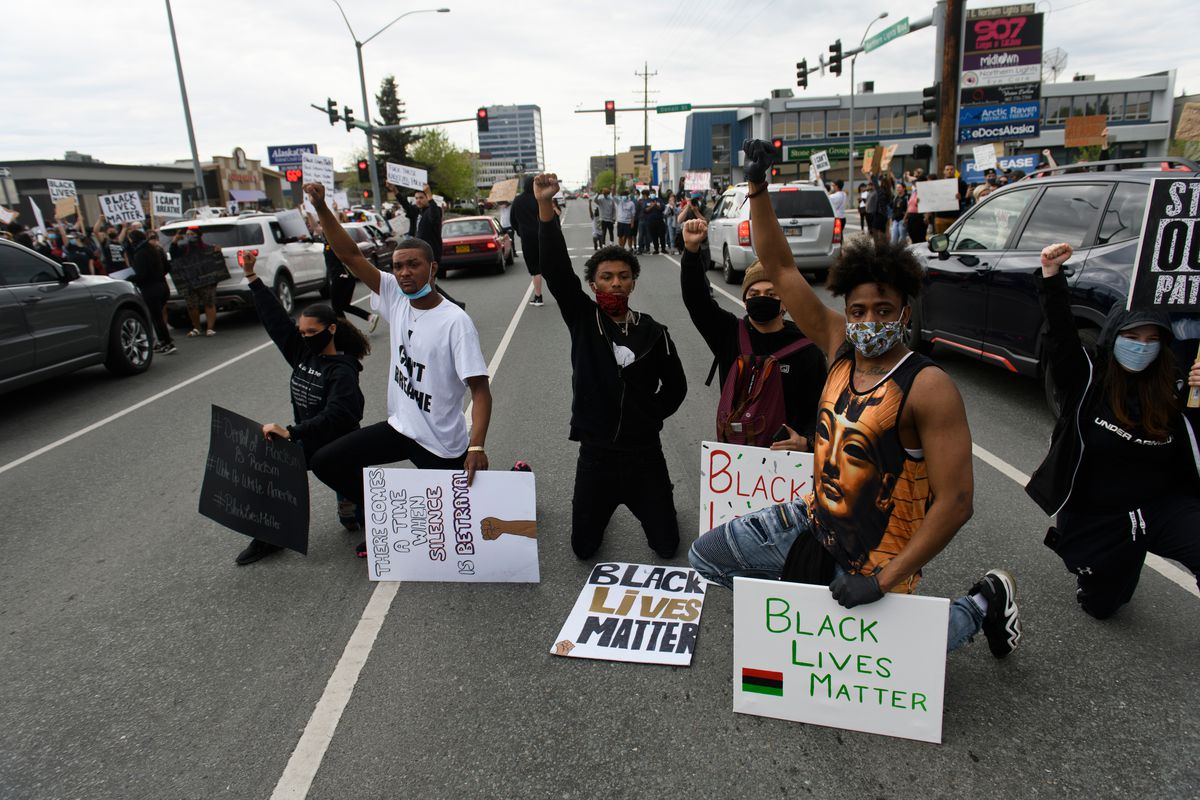 In Alaska, the outpouring of public protest about George Floyd’s death by asphyxiation was heartfelt and far-reaching, as it was throughout the rest of our nation, and here, there was one big positive; it was peaceful. There was no destruction of property.

On May 30, traffic going down Northern Lights Boulevard was slowed by young people racing ahead of cars and stepping out into the street waving their protest placards. The dynamism was contagious. Drivers beeped and waved back expressing approval and support. No doubt the moment was enhanced by the break from the social isolation imposed by the pandemic. But the shared support for Black Lives Matter was palpable.

The next weekend in Palmer, 1,400 young people gathered to express their outrage. They had been joined by others in the Mat-Su region as well as a contingent from Anchorage.

To take a statewide view, the peaceful protests extended throughout Alaska to communities, large and small, most populated by people of several different races. There has never been a social movement in Alaska quite like the protests of these last few weeks!

This amount of protest and its youthful, diverse composition is vastly different from what happened during the days of Martin Luther King when protesters were predominantly African American adults. This time in Alaska and elsewhere protesters were of many races. And they were young! In Anchorage, the initial organizer who filed for the permit was a 17-year-old high school boy. In Palmer, the filer was an 18-year-old girl.

As former President Barack Obama has urged, now is the time to turn protest into productive actions to prevent more wrongful death.

Ours is a country founded on noble goals. To respect and respond to the protesters, we should remember our ideals and act accordingly. In 1776, a time of kings and emperors, the signers of the July 4 Declaration of Independence risked hanging for treason when they pledged “that all Men are created equal, that they are endowed by their Creator with certain unalienable Rights.” Ninety years later, it took the Civil War and the death of as many as 850,000 Americans, including Abraham Lincoln, to rededicate our nation to these truths.

Taking the knee shows love for our country and the noble goals of our founding fathers. Doing so says America can do better! A wide swath of the country believes this. A recent national poll shows that 84% of Americans believe the peaceful protests are justified. No doubt this includes many members of the police. Among the most powerful images of the protests are police officers and protesters taking the knee and giving each other a fist bump.

Living up to our national ideals takes ongoing work. In Anchorage, Partners Reentry Center, run by Partners for Progress, Inc., has achieved positive results in coordination with the Anchorage Police Department and the Alaska Department of Corrections.

Alaska Natives are the racial group that is most disproportionately incarcerated in Alaska. Often, after release from prison, they are stranded in the unfamiliar urban setting of Anchorage. In response, Partners Reentry Center sponsored a self-help group of Alaska Natives who, among other productive projects, have worked with the Anchorage police chief to help introduce new police cadets to Anchorage. Since 2017, this effort has blossomed to include regular panel discussions with the police and representatives of the many different cultures in Anchorage — Hispanic, Polynesian, Filipino, African American, Alaska Native and more.

But probably, the single most effective way to give the nationwide protest a productive response is by voting on Nov. 3. The current president has never looked beyond himself to realize, in the words of President Abraham Lincoln, that government is “of the people, by the people and for the people.”

It is important to elect people who can create and maintain good government. This is crucial at all governmental levels. All people care about the future of their children. That is a good starting point for finding common ground to solve the crisis of social justice that was so starkly revealed by the recent protests.

To move from protest to progress, exercise your precious right to vote!

Janet McCabe chairs Partners for Progress, Inc. and is a member of Alaska Common Ground. She and her husband, David, came to Alaska in 1964.