A reckoning on race is upon us 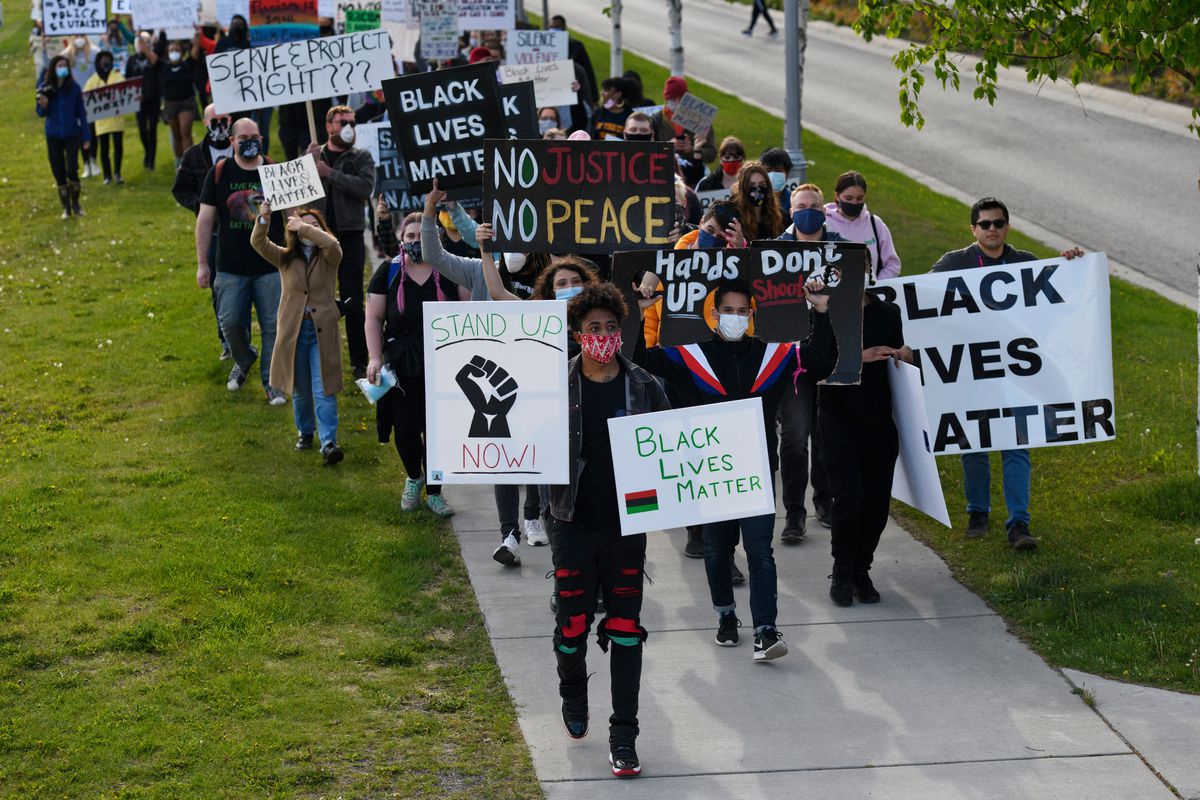 Adrian Patterson leads a march of along 9th Avenue. Protesters of police brutality rallied on the Delaney Park Strip and marched through the streets of downtown Anchorage on Friday evening, June 5, 2020. (Marc Lester / ADN)

Adrian Patterson leads a march of along 9th Avenue. Protesters of police brutality rallied on the Delaney Park Strip and marched through the streets of downtown Anchorage on Friday evening, June 5, 2020. (Marc Lester / ADN)

There are traceable events from the last decade of 20th century and as we enter the third decade of the third millennium that are contributors to the conditions that exist to this very day. Our nation must, out of necessity, if not our very survival, confront systemic racism that has been allowed to become as American as apple pie. While certainly not to be considered an exhaustive list, I have herein noted what I believe to be five major contributors to our current state of affairs.

• Corporate profiteering with not corresponding accountability

• We, as Blacks, often aid and abet racism, wittingly or unwittingly

• The election of the most openly racially divisive president in memory

Since the mid-1990s, the Supreme Court has made a number of 5-4 decisions turning back the clock on hard-fought and, in too many instances, violent gains to advance the causes needed to promote equality in a democratic society. Rulings against affirmative action — a far more benign and acceptable alternative to the increasing calls for reparations now being shouted with ever-increasing volume — and the gutting of the Voting Rights Act of 1965, thus facilitating the return of voter suppression laws at the state level, have heightened tensions in America to the brink of violence.

There exists a body of evidence that documents the fact shipping jobs overseas to increase profits, then sheltering these profits in offshore accounts to avoid paying taxes is occurring to an unconscionable extent. The result is that American workers’ wages have been stagnant dating back to the early 1990s. This practice has starved our nation of the revenue it needs to provide services to its citizens and as such our nation is teetering on the edge of financial insolvency, as our national debt has zoomed past $26 trillion.

While it is difficult to admit, as African American, my people aid and abet America’s brand of racism. The reason being is our inability to discern intent. I am not referring to the need for anyone to confront, agonize or analyze the reasons individuals chose to use derogatory terms to demean another person’s existence because of their need to mask inadequacies or irrational fear. The major problem for us is: How do we make the call in a political context? Do we automatically reach the conclusion that persons who call themselves conservatives are racists? Also, we often fail to vote our interests. All this behavior does for us is to allow persons in power to treat us with contempt or, more benignly, in patronizing ways.

Blacks have known for decades that the police are viewed as a controlling, not a patrolling force in our communities. This includes here in Alaska, dating back to the late 1970s, when an unarmed Phillip Moore was killed by a state trooper, an incident initiated by an alleged traffic violation. With the invention of the cellphone camera, incidents of unwarranted use of deadly force have been captured in such alarming numbers that citizens all over America — and, for that matter, the world — are demanding that needed changes be made to our justice system.

It is my belief that the 2016 presidential election has proven to be the worst decision the American electorate has ever made.

The current administration’s domestic agenda and foreign policy initiatives can only be described as the Calamitous Twins. The current president’s key to remaining in power is predicated on keeping our country hopelessly divided along our racial, economic and religious fault lines. Internationally, he has totally alienated allies of longstanding and has made us, in a little over three years, the laughingstock of the world.

In light of what is herein discussed, I do not believe it to be fear-mongering to suggest if we fail to slay systemic racism in all its forms this time around, America ain’t never going to be the America it can be.

Louie Overstreet is a former president of the Alaska Black Caucus.