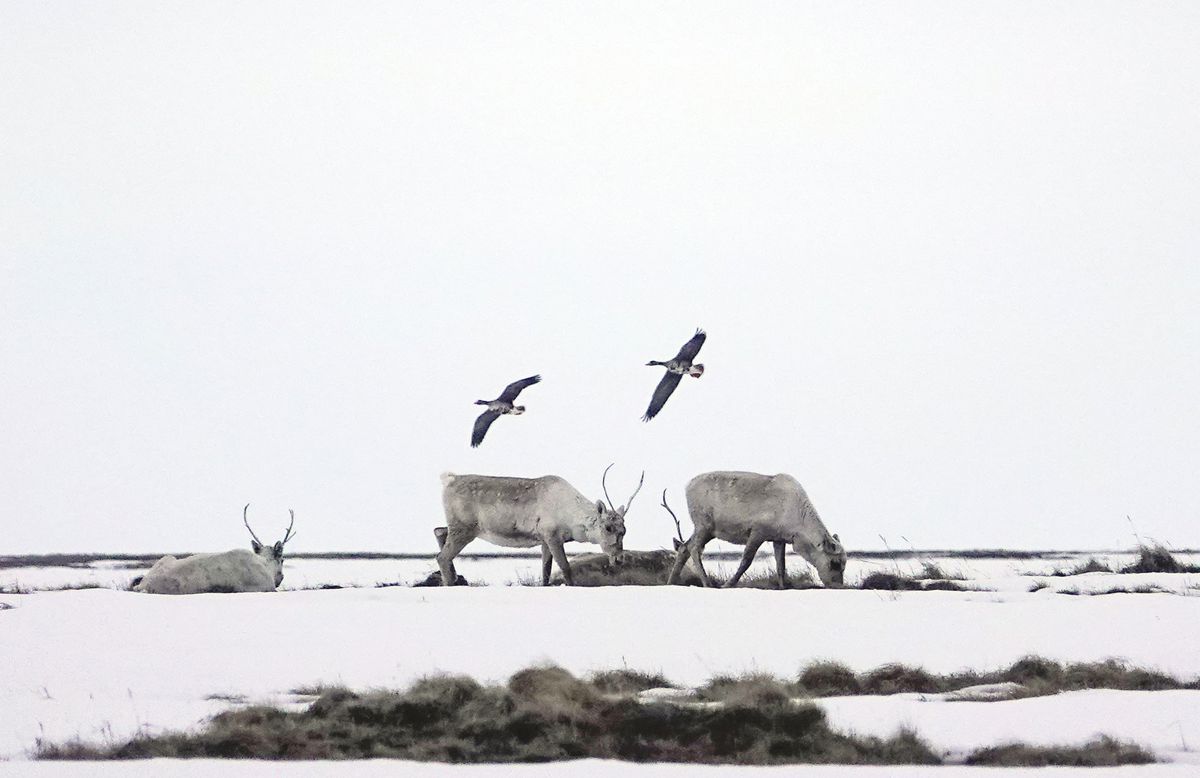 Caribou and geese at Teshekpuk Lake in North Slope Borough, Alaska, on May 26, 2019. (Washington Post photo by Bonnie Jo Mount)

Caribou and geese at Teshekpuk Lake in North Slope Borough, Alaska, on May 26, 2019. (Washington Post photo by Bonnie Jo Mount)

The Department of the Interior’s Bureau of Land Management (BLM) recently released its final land-use plan and Environmental Impact Statement for the 23-million-acre National Petroleum Reserve-Alaska in Alaska’s western arctic. This new plan would supersede the current plan finalized in 2013. It would dramatically increase the areas open to oil and gas leasing by seven million acres, as well as the areas allowing surface developments by 4.3 million acres.

The development of the 2013 plan, on which I participated, included substantial public outreach and input — more than 400,000 public comments were received in support of the final 2013 plan. It included carefully constructed land use designations that balanced statutory provisions for oil and gas leasing and protection of key wildlife and surface values. It recognized existing and potential oil and gas lease areas, including the recently discovered “Willow” unit, and it also recognized the importance of subsistence uses of Reserve lands by North Slope residents.

The 2013 plan struck a good balance in protecting the outstanding wildlife, subsistence and other natural and cultural values of the Reserve while leaving a little more than half — 12 million acres — open for oil and gas leasing and development.

The new plan put forth by the Trump administration adopts a “preferred alternative E” which was not proposed or available for public comment during the draft plan and EIS processes. This alternative would open nearly 19 million acres — 82% of the Reserve — to oil and gas leasing, more than the area proposed in any of the alternatives analyzed in the draft plan and EIS. Most of the acreage not available for oil and gas leasing is in the Utukok Uplands Special Area, a remote area of low oil and gas potential.

The new plan most notably opens the entire Teshekpuk Lake Special Area to oil and gas leasing. The outstanding values of this area were specifically mentioned for protection in the 1976 Act transferring the Reserve from the U.S. Navy to the Department of the Interior. No leasing has been allowed in the Special Area since that time. The 2013 plan prohibited leasing in approximately 3.1 million acres surrounding Teshekpuk Lake to protect the calving, migration and insect relief areas required for the Teshekpuk Lake caribou herd — counted at more than 56,000 animals in 2017. Several thousand animals are harvested annually by North Slope residents. The Special Area also protects critical goose molting areas, and nesting areas for globally significant numbers of shorebirds, loons and Endangered Species Act-listed eider ducks.

Although a thin margin surrounding Teshekpuk Lake would continue to prohibit new infrastructure, much of the remaining Special Area is a hodge-podge of areas open to all development, open to roads and pipelines, subject to seasonal restrictions, and other operating procedures subject to waivers and exemptions. These areas of special conditions are clearly geographically designed to accommodate and promote oil development, not to protect key areas utilized by the Teshekpuk Lake caribou or other wildlife resources.

The new proposed alternative completely does away with the Colville River Special Area. This area was designated shortly after the 1976 Act by the Secretary of the Interior specifically to protect the nesting habitat of significant numbers of birds of prey including Peregrine falcons, gyrfalcons, rough-legged hawks and golden eagles.

Caribou, waterfowl, shorebirds and other wildlife are dependent on specific undeveloped habitats that have been protected under the 2013 plan. The permitting of oil leasing, roads, pipelines and other infrastructure in greatly expanded areas of the Reserve under this new plan can be expected to have substantial and serious impacts on wildlife resources. Wildlife in the Reserve require large areas for their health and survival as their ranges and habitats are dynamic, varying with conditions year-to-year. This is particularly true against a backdrop of dramatically changing temperatures, vegetation and sea level rises in the Reserve and across the Arctic.

The new plan does not adequately identify nor mitigate these impacts. Nor does the final plan and EIS benefit from public input on the preferred alternative “E.” The federal government is a long way down the road on this plan, and we can only hope that some change soon can prevent a looming tragedy to some of our nation’s most outstanding natural resources.

Pat Pourchot retired as Special Assistant for Alaska Affairs to the Secretary of the Interior in 2015. He also served in the Alaska State House and State Senate, and as Commissioner of the Alaska State Department of Natural Resources. He currently serves on the board of directors at Alaska Wilderness League.