Imagine it’s 1948. Does Alaska still deserve to be a state? 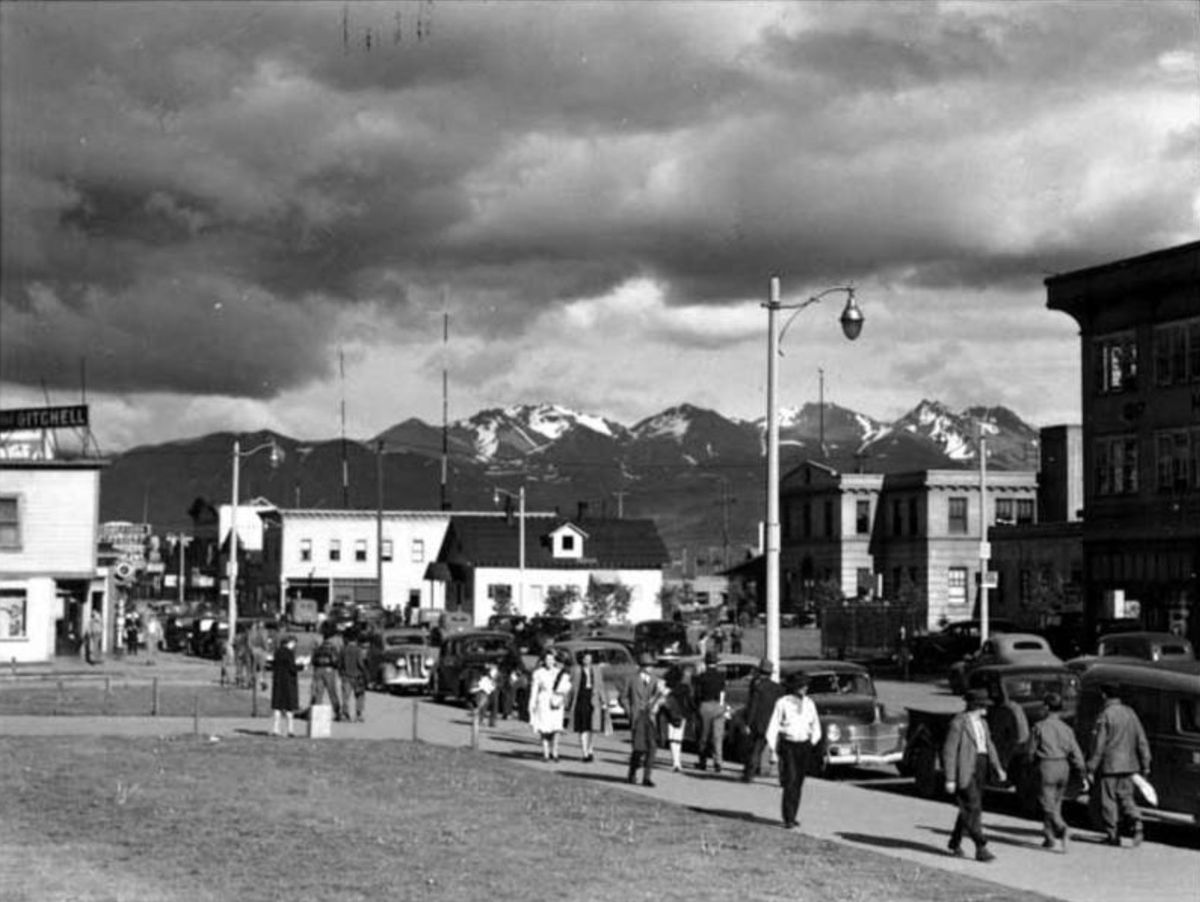 View of 4th Avenue and F Street, Anchorage, Alaska, looking south from the grounds of the Federal Building in the 1940s. Buildings shown include The Gitchell Hotel and City Hall. (Photo by Sidney H. Hamilton, Sidney Hamilton Photograph Collection; Anchorage Museum, Gift of Emily Turner, B1976.82.18.)

View of 4th Avenue and F Street, Anchorage, Alaska, looking south from the grounds of the Federal Building in the 1940s. Buildings shown include The Gitchell Hotel and City Hall. (Photo by Sidney H. Hamilton, Sidney Hamilton Photograph Collection; Anchorage Museum, Gift of Emily Turner, B1976.82.18.)

In the 1940s, the Alaska Territory lacked the “political maturity” to become a state, according to the prevailing wisdom of the time. I long wondered what that meant, but now I understand.

Alaska has arrived back where it was before its residents first showed the grit and vision that proved they deserved to be full American citizens with their own state.

In those days, Alaska’s economy relied on federal spending and the canned salmon industry. Outside companies controlled the salmon industry with fish traps licensed by the federal government.

The traps reliably scooped up fish without the help of local fishermen. Profits left the state and the canneries paid scant taxes to support education, roads or the other territorial needs. The territorial government was endlessly short of funds.

Ernest Gruening learned about these problems after President Franklin Roosevelt appointed him as territorial governor in 1939. In his 14 years in office, Gruening did more for Alaska more than any other person in its history.

He passed an equal rights law for Alaska Natives (although he also fully credited Elizabeth Peratrovich’s famous speech to the territorial Senate in 1945). He led Alaska through the war. He ended the bounty on bald eagles, possibly saving them from extinction. And many other accomplishments.

Before Gruening, Alaska statehood was a pipe dream. He built the movement, recruiting newspaper publisher Bob Atwood to the cause, and addressed the real issues preventing it.

How could Alaska become a state if it couldn’t even tax itself for the most basic needs? That was a reasonable argument.

Alaska’s population was highly transient. Most non-Native residents were wealth seekers who came north to rip and run — they saw no reason to tax themselves for long-term improvements they would never use after they departed.

The canned salmon industry controlled the territorial Senate through clever politics and raw corruption, blocking taxation or moves toward statehood, which would give locals control of fisheries.

Gruening called on Alaskans to stand on their own feet, face down the Outside resource companies, and pay for their future.

In 1945, the canned salmon industry offered to pay a tiny tax to quiet him down. Gruening turned it down.

“This is a wholly unworthy and humiliating position for a great Territory which aspires to be a sovereign state,” he wrote in a message to Alaskans. “The correct attitude for Territorial representatives in both houses, if they represent the people of Alaska, is to determine what expenditures they shall make and then impose the necessary taxes.”

But Alaska’s territorial voters were unpredictable — that’s part of political immaturity — and handed him an even worse Legislature. In 1947, it turned down fish taxes and passed a vastly out-of-balance budget.

Gruening had to borrow money from various companies to keep the territory and the University of Alaska open. Alaska Airlines kicked in $25,000.

That fiscal mess set up the election of 1948. This time, voters backed Gruening’s candidates.

The 1949 territorial Legislature created the Statehood Commission, which led that fight over the next decade, and gave Gruening his fish taxes, plus an income tax of 10% of federal taxes, as well as taxes on business licenses and tobacco.

The change showed that a new generation was taking over from those who came north just for quick cash, Gruening said in his message to Alaskans.

“There was no vision of hewing a home out of the wilderness for their children,” he wrote, “with ‘get it and get out’ a widely accepted practice.”

The Legislature had turned a historic page. “Their legislation spelled out the desire of an ever-increasing number of Americans to consider Alaska their home,” Gruening wrote.

The Statehood Commission organized the Alaska Constitutional Convention in 1955. Both parties agreed on that visionary document and the public supported it by a 2 to 1 margin. Congress recognized that political maturity and approved statehood in 1958. The state flag rose in 1959.

With our industries in decline, federal spending is again the heart of the Alaska economy.

Outside owners again control the state’s most important resources. Wealth comes from oil wells rather than fish traps, but the profits still leave Alaska.

Using clever politics and raw corruption, the oil industry has controlled the Alaska State Senate, just as the canned salmon industry did in territorial days.

World oil demand has peaked and Alaska’s patrimony is mostly gone, but the oil industry still gets to decide how much it is taxed. “A wholly unworthy and humiliating position for a great Territory which aspires to be a sovereign state,” as Gruening wrote.

Heirs to the “get it and get out” crowd have come back strong, too. They’re the dividend hawks willing to see Alaska’s finances and economy collapse rather than give up their annual freebie from the Alaska Permanent Fund.

Meanwhile, as in 1947, Alaska is deeply in deficit and its future is cloudy.

Ernest Gruening boldly solved that crisis and led Alaska forward. Gov. Mike Dunleavy, by comparison, is inarticulate and ineffective and doesn’t seem to know himself what Alaska’s future should be.

A friend who moved to Maine gave me his take on what “political maturity” means. In Maine, they also have tough political battles. But they don’t continually fight on what the state is all about, as Alaskans do. Mainers know what Maine is, so politics are about the details of fulfilling that vision.

People who believe in the future — who want to raise children and be buried in Alaska — can vote to tax the oil industry and elect legislators who will raise revenue to keep the state alive.

If that happens, then the next decade could be the time for finding a new consensus, like the decade of the Alaska Constitutional Convention. Alaskans could chart a prosperous and fulfilling future.

That would require political maturity.