Understanding our history starts with the truth 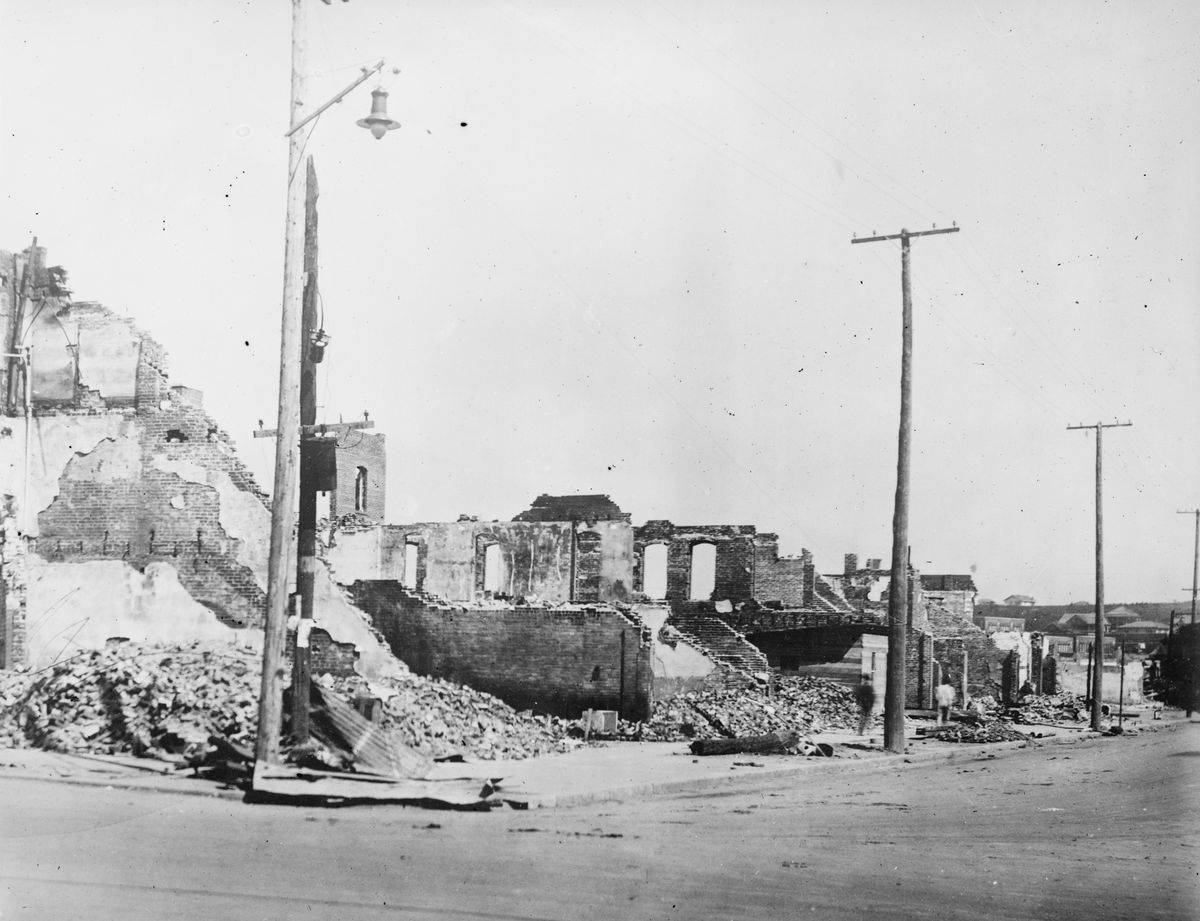 The aftermath of the Tulsa Race Massacre in the city's Greenwood neighborhood. (Library of Congress photo)

The aftermath of the Tulsa Race Massacre in the city's Greenwood neighborhood. (Library of Congress photo)

Recent attacks on “critical race theory” and other educational efforts to illuminate the enduring impacts of racism in America, sadly, come as no surprise. The campaign to reshape our country’s history of racial injustice into false narratives that minimize its harms and castigate its continuing victims is as old as our country. Yet my own family’s history has shown me just how widely the currents of racial injustice flow, and how deeply they still ripple outward.

Since childhood, my white father had dreamed about a professional career, influenced by watching his own father labor in tin mills and try without success to support his family as a farmer. Before World War II, Dad earned a master’s degree in chemistry from Oklahoma State University. After the war, he enrolled in a doctoral program at Massachusetts Institute of Technology, but a major tuition hike only three months later made staying unaffordable, and he was forced to leave. The Pennsylvania native then tried to study at Ohio State University, but that program soon closed to out-of-state residents, overwhelmed by the influx of its own returning soldiers eager to take advantage of the G.I. Bill. Persisting through other setbacks, Dad ultimately enrolled at Texas A&M University, where he received a doctorate in chemistry in May 1950.

My father encountered a few bumps in the road on his path to higher education, but one challenge he never faced was hostility to the color of his skin. The same month he earned his doctorate, the U.S. Supreme Court ruled – for the first time – that our nation’s graduate schools could not deny admission based solely on race. The same years my father was earning his life goal – a Ph.D. – two men with similar qualifications and ambitions were being denied the opportunity because they were Black.

George W. McLaurin was a middle-aged Black man with a master’s degree in education when the University of Oklahoma refused to allow him to pursue a doctorate in education. In 1948, a federal court had ordered the university to admit him, which it did. But in keeping with Oklahoma’s strict laws against educating Black people and white people together, university officials went to great lengths to ensure that Mr. McLaurin was isolated from his classmates in every possible way. They placed his desk in an alcove just outside the classroom so fellow students wouldn’t sit near him, set up his own table in the library so he wouldn’t mix with others, and even ensured that he ate alone in the cafeteria. McLaurin petitioned the federal court to lift the restrictions, but the court denied relief. Only after appeal to the U.S. Supreme Court did McLaurin achieve equal treatment.

The same day the McLaurin case was decided, the U.S. Supreme Court ordered the law school at the University of Texas to admit Heman Marion Sweatt, a qualified Black man who had been refused admission based on Texas laws that prohibited integrated education. The state of Texas had attempted to satisfy the “separate but equal” standard by creating another law school for Black people. But the court compared the two schools and found them vastly different: the white UT school had more than three times the number of professors, four times the number of books in the library, and many more facilities and resources than the Black school. The court judged the schools to be far from equal and ruled in favor of Sweatt, setting a precedent for Brown v. Board of Education, the landmark 1954 decision that struck down the “separate but equal” doctrine in our nation’s public schools.

Today, it’s impossible not to wonder how different my father’s educational experience would have been if he had faced the same discrimination as men like McLaurin and Sweatt. He would never have earned his master’s degree from an Oklahoma university in 1940, because the school would not have let him in. And he would never have earned a doctorate from Texas A&M in 1950 because that door would have been closed, too. What my dad would have done instead will remain forever a mystery; he never speculated about it because he never had reason to. But one outcome is certain: He would have been deprived of his dream to be a scientist, and of the life of teaching and research he grew to love.

It’s also impossible to ignore the impact of my father’s white skin on the trajectory of my family. His academic achievements secured us a solid place in the American middle class, with titles and salaries that brought us not only social uplift but material stability. We lived in nice neighborhoods, attended good schools, and seized countless opportunities to enrich our lives. What my family’s story would have been without the underpinning of my dad’s academic degrees will forever remain a mystery, too, because we never had to think about it. But based on the well-documented financial advantage of my father’s higher education, another outcome is almost certain: We would have landed lower on the economic ladder.

In my father’s generation, countless Black men, no different from him except for the color of their skin, had their educational hopes and dreams dashed by deep prejudices against their race enshrined in our nation’s institutions of higher learning. They were deprived of careers that could have brought not only personal satisfaction but immeasurable benefit to their communities. And their families were deprived of the many fruits of higher education that pass down through generations, the fruits that enabled my father and my family – and me – to thrive.

Events of this past week have me thinking about the other branch of my family tree, on my mother’s side. My mother was born in a small white farm town in eastern Oklahoma, less than an hour’s drive from Tulsa. Her birth in early 1922 occurred just seven months after the Tulsa Race Massacre of May 31 – June 1, 1921. Commemorated this week on its 100th anniversary, the massacre destroyed the Greenwood section of Tulsa, once known as Black Wall Street for its prosperous rows of shops and businesses. Three hundred Black people were murdered, 10,000 were displaced, and 35 blocks of what had been a vibrant Black community were burned to the ground. Although the historical record confirms that a white mob carried out the bloodshed, no one responsible for the killing and destruction was ever brought to justice.

I visited Mom’s hometown often as a kid, and returned several times as an adult. Yet I had no knowledge of the brutal events until 2018, when I visited Oklahoma for a cousin’s funeral and a Black cab driver in Tulsa asked me if I knew the story of Greenwood. I said no, and he proceeded to tell me. As we drove near the section of town where Greenwood once thrived, I was stunned by his description of the tragedy, even skeptical. Surely such an atrocity could not have been hidden so long from the public eye? Surely a crime of such magnitude could not have happened with impunity? But the quiet authority of the man’s voice convinced me that he was speaking the truth, and my later research confirmed the details. Learning the brutal story, I felt anger and disgust at the massacre itself, but also shock at my ignorance, and questions about my own family’s awareness and long unbroken silence.

Was it possible that my mother’s family didn’t know about the horrific events that happened so close to their home? Was it possible they stayed quiet about the carnage because they endorsed it, and supported those who viewed successful Black communities as an existential threat? Was it possible they even participated, or knew others who did? Reflecting on these questions, I remembered the close relative who once told me “Black folks knew better than to come to our town.” And my other relative who uses the N-word freely, even today.

Today, all I can grasp with certainty is that a grave injustice happened near my family’s home ground that was never spoken about and almost disappeared from the public conscience. All I can know with confidence is that, had my family been Black, our hopes for prosperity – and our very lives – could have been ripped from us by a hatred we could not control, in ways that would echo still.

Those who suggest that a close examination of racism’s legacy is an attack on our country are asking us to ignore uncomfortable truths that still affect us every day. To me, it’s more vital than ever that we learn the hard lessons of our past. We can’t begin to rectify the impacts of racism – on ourselves, our families, or our communities - until we’re willing to acknowledge they exist. Our most difficult stories of racism’s reach, shared openly and honestly, won’t harm our country. They’re the best chance we’ll ever have to heal it.

Barbara Hood moved to Alaska from Texas a half century ago, and has worked for human rights and social justice for 40 years.